Ghana And The World Mourns – As Asantehemaa Goes Home 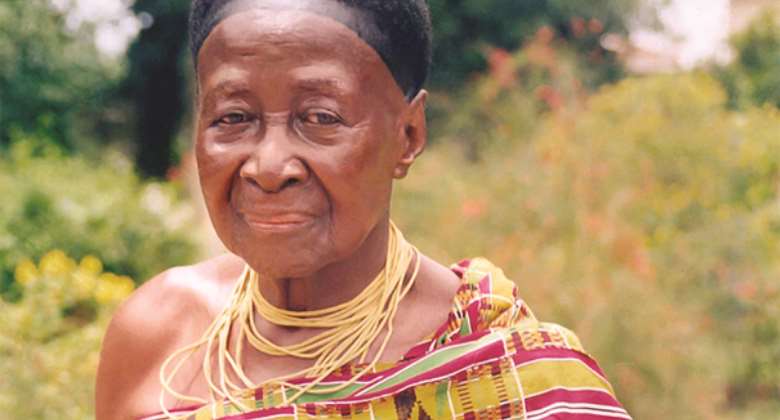 “Nana, you very successfully fulfilled your historic role of destiny.

You will remain much beloved in your Kingdom, Asante, and

by many beyond who were fortunate to come close to you.”

His Excellency J. A. Kufuor
Former President of Ghana
“I shall remain true to your advice; and

I shall forever remember and live by your words of wisdom.”

a great lady who nurtured an amiable King.”

Kabaka of Buganda
MARY AFFUL (a corrupted form of Afodoo, her father's name) is in the records at the St. Cyprian's Anglican Church Kumasi. That was in 1927, 22 years after she had been born in 1905. That was how the British corrupted many of the local names, so that Fom-asua; my mother's home village, would be 'Fumesua' from where the late Queen (she was not the mother of a queen) of Asante derived her name 'Kobi' (after the shrine of 'Kobiri') in the village.

'Mary' must have been well chosen; the name of my mother, was in reference to 'beloved lady' and that of the mother of Jesus.

Nana Afia Kobi was born at a time of historical upheaval in Asante, nine years after the exile of King Agyeman Prempeh I to Seychelles Islands (from Elmina to Freetown).

Smooth, dark-complexioned Afia Kobi grew beautifully and strong, and received good education on courtesy, hygiene and culture in the courts of Asantehene. In a typical traditional setting, she performed the puberty rites when she reached the age of puberty.

In 1950, Nana Afia Kobi gave birth to an agile and dexterous boy, called Kwaku Duah, the future King of Asante.

Words cannot sufficiently describe the sterling qualities of the late Asantehemaa: she was, according to her son Asantehene, “a killer of hunger, a savior; the slender arm full of kindness, the ruler whose strings were on all hearts”. Otumfuo Osei Tutu II eulogises his mother; “You made me proud by the example you set, and you gave me confidence by your very presence. It gave me immense pleasure to observe the very easy relationship that you struck with all people, including the famous and well known and the insignificant and obscure”. But as the biological mother of the great King, she taught him “to show respect to everyone, regardless of their status in life”. And when adjudicating complicated cases, Otumfuo would go and literally 'consult Aberewa' his mother who had suckled him and lulled him to swoon with serenade and lullabies when he was a baby.

Like Biblical King Solomon, whose mother Bathsheba had a hand in his upbringing, our Asantehene had his footsteps guided by his mother and his uncle, Oheneba Mensa Bonsu, Hiahene. Both did not want Otumfuo to get swollen – headed, so they sent him to Sefwi Wiawso for schooling – not only to be schooled on humility but also for him to have a fore-taste of the “dignity of labour”. Asantehene was not pampered; he was not doted upon-he passed through life as a common man.

Asantehene learnt the traditional way of doing things under the tutelage of the late Nana Kwadwo Aduhene, the Omanhene of Sefwi. All this while, his mother, the Asantehemaa, never blinked an eye over his upbringing – not even when he went to do his 'A Levels' at the Osei Kyeretwie Senior High School, then the Institute of Professional Studies, Legon and then the professional accountancy course in Kilburn Polytechnic London.

Otumfuo would recall: “I became convinced that the training, the upbringing and the tutelage I had after being removed from the comfort of royalty at Manhyia Palace to Ash-Town, all the way to Sefwi Wiawso were all decisions that were taken in my interest.”

When age began to have a telling effect on the Asantehemaa, Otumfuo would personally push her around in a wheelchair and he recalls – “I remember you cautioning me that we should be very careful not to let any of the chiefs see us lest you would be reprimanded for letting the Asantehene push your wheelchair, and me responding that I was doing that for my mother as a son; you laughed about it. Surely, the caution was because of how you cherished and respected the position of Asantehene”.

Immense have been the accolades showered on the Asantehemaa; noble has been the extollation of her humility, honesty, sincerity and forthrightness. Nana Asantehemaa deserves all the eulogies poured on her. She has given Asanteman and Ghana peace, and has also given us the best gift of all – the gem in Otumfuo's personality.

Oheneba Aduse Poku, Akyempimhene extols the virtues of Asantehemaa: “Nana Hemaa thanks to you. I have a name to uphold, people to meet and opportunities to serve; thanks to you, I have a standard to exceed, records to beat and values to preserve. My closeness to you was so beneficial; a lot of virtues were picked from you, virtue of selflessness, dedication of service to the Golden Stool; sharing among relatives, virtue of reconciliation and living in peace with everyone”.

The wake was solemnly celebrated last Sunday and since Monday, people from all walks of life far and near have trooped to Manhyia Palace to catch a glimpse of the body of the beloved Asantehemaa. These include His Excellency, Nana Addo Dankwa Akufo Addo, the President of Ghana who is also an Oyoko. President John Agyekum Kufour from Apagya Fie has been present all along, and the Adumhene has been sitting close to the body, protecting her while she lay there just as he did while she was alive.

Today, Thursday, is the day for the requiem mass, and the day for burial. One may remember that Thursdays used to be the traditional Asante days for 'mourning', until the late Kutu Acheampong made Saturday a day of rest, and the funerals were conveniently shifted.

Let the drums beat, let the bells toll, let the moon glitter and let the sun glow. Otumfuo says: “May you have the peaceful repose that you have earned. I thank you for your many good works, for your shining example and for your words of wisdom to me and many others. Nana Hemaa, Nante Yie.”

All of us say: “Nana Hemaa, you deserve it; you have earned it; we are proud to be Asante.”