Nana Addo Must Not Tolerate Incompetence And Laziness----Revamp Backroom Staff 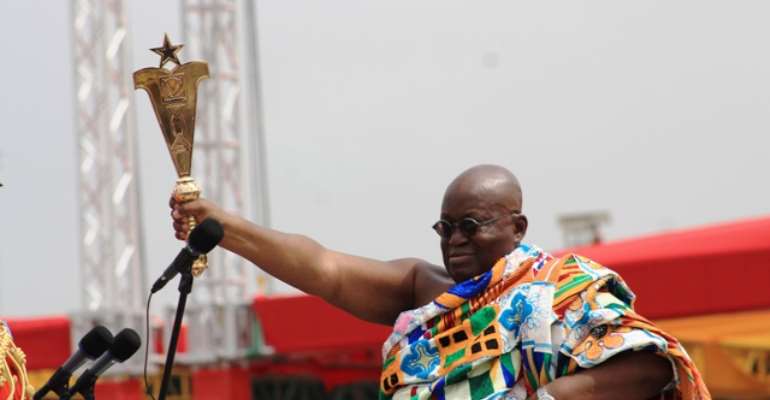 The plagiarism allegation has taken the shine out of an otherwise great day, great speech, that Ghanaians everywhere should be proud of. It was needless, and could have been avoided. Every Ghanaian, those who voted for change and those who didn’t had the occasion to be proud of yet another peaceful transfer of political power from the governing party to an opposition party. The whole world applauds Ghana for setting a bright example for other African countries to emulate.

Now instead of digesting the inaugural address delivered by the President Nana Addo Dankwa Akuffo Addo, people are talking about him plagiarizing parts of former US presidents namely George W. Bush’s and Bill Clinton’s inaugural speeches.

The first came from George W. Bush's speech in 2001. "I ask you to be citizens: citizens, not spectators; citizens, not subjects; responsible citizens building your communities and our nation,” he said

And then came a line straight from Bill Clinton's 1993 speech, substituting Ghanaians for Americans: "Though our challenges are fearsome, so are our strengths. Ghanaians have ever been a restless, questing, hopeful people. And we mustbring to our task today the vision and will of those who came before us.”

The error of not attributing the line to its original authors comes from the young man who serves as the Communications Director at the Presidency named Eugene Arhin and he has apologized. This young man serves as the Presidential speech writer and he should have known the enormity of the task and the particular importance of inaugural speeches. The President also has a Secretary Nana Bediatuo and a Chief of Staff, Frema Opare. What checks did they make on the final speech before Nana Addo delivered it?

In drafting inaugural addresses, political historians study past addresses to pick themes that align with the vision of the incoming President and couch them in sometimes colourful phrases that will be remembered for a long time and can be quoted years from now. The President sets the tone with his vision, and themes he wants stressed. The speech goes through several phases, edits, and re-writes before a final version.

In the international press, nobody mentions Eugene Arhin’s name, it is Nana Addo Dankwa Akuffo Addo who stands accused for plagiarism. The Washington Post, BBC, New York Times etc all reported Ghana’s new President Nana Addo plagiarizes Bush and Clinton. It is embarrassing, to say the least. This is not what you want on Day 1. Usually Presidential inaugurations are well choreographed events, and everything happens flawless or are supposed to be flawless. No room for marginal errors!!

Even during the delivery of Nana’s inaugural speech, it was obvious he needed water to drink and it is a normal practice to have a bottle of water and a glass available for such speeches. There was none. Whose job was it to have this available? Nana cannot afford to have incompetent people around him. Everyone serving in any capacity in this administration must note that Ghanaians are looking up to them and that he/she carries on his shoulders the hopes and aspirations of millions of Ghanaians who voted for change. Nana has promised he won’t let us down and so should all those who are supposed to assist him shine. Ghanaians cannot afford to have the same level of incompetence we had with the last administration. We voted for change and the change must be refreshing, it must manifest itself at all levels of government and in the lives of Ghanaians.

Ghanaians remember very well, last year’s independence day anniversary brochure and all the embarrassing errors it contained. Some people in the presidency didn’t do their job but as usual with the Mahama administration nobody got sanctioned for such sloppy work. Ghanaians are interested in giving themselves big titles and positions but don’t do the work they are supposed to do. In this modern times, there are plenty of software to detect plagiarism. There must be layers of checks on anything that goes to the public before it is done in the name of the government and the presidency. Simply put, people must work for the salaries and allowances they draw not just occupy positions and give themselves titles.

Nana Addo needs to revamp his backroom staff particularly the presidential speech writing team. Bring in more experienced hands and ensure discipline is at work. Not too long ago, social media was ridiculing Melania Trump, US First Lady elect for plagiarizing Michelle Obama FLOTUS’s speech. If I do remember well, President Buhari of Nigeria fired his speech writer for plagiarizing parts of US President Obama’s speech. It doesn’t help at all, for a speech as important as inaugural speech to be tagged with plagiarism. Nana Addo must make it clear to all that such lapses will not be tolerated in the future. We wait to see what the President will do. Competence and discipline must be the watch words.

Ben Ofosu Appiah.
Accra.
The writer is a senior policy strategist and an economic, political and social analyst. He welcomes your comments: [email protected] Tel: +233 26 765 5421