The Imperium Of The Thumb 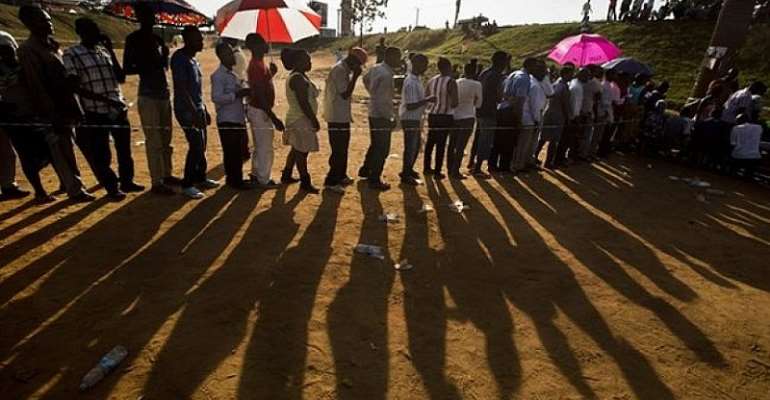 I have read multitudinous of features concerning the last held elections on both print and electronic media. Political pathologists have performed postmortems on the victor’s victory and the abysmal performance of those who were subjugated.

They cited a lot of factors which in a way can pass the truth test if it is subjected to the test of a polygraph. The sophisticated Ghanaian voter has given the politician a tremendous justification to worry after they have proven they are no longer those that can be taken for a ride. They have arisen for change!

The season of political reproves it was! Pollsters prognosticated with their pens and pencils on graphs but the voters did the accurate prognostications with their thumbprints on the ballot papers. In the end, it vividly emerged that voters are the genuine pollsters and not those in a fully air-conditioned room on swivel chairs always taking a comfortable lead in foretelling the outcome of elections. The voters smashed eggs on the faces of the pollsters.

The vanquished campaigned with ‘‘Changing lives and Transforming Ghana’’ and the victors campaigned with ‘‘Arise For Change’’. Indubitably, the former’s live was really transformed with opposition status and the latter’s did achieve what they have been running after for the past seven years from the Ghanaian elector, political power. The National Democratic Congress banked their hope of electoral fortunes on the massive infrastructure projects doted across the length and width of the country only to be shown the exit door with inauspicious percentage of valid votes cast.

I am still flummoxed and infact, discombobulated like a Member of Parliament who convincingly loss an election and chaperoned joblessness into unparliamentary life as to whether the Ghanaian voter did not want to break the voter pattern relationship with the united states of America or change was the latest and sweetest chocolate in town that merited tasting especially when the residents of Adenta who heretofore was searching for Adam’s ale with “Kuffour Gallons” is now having the commodity flowing through their taps and showers with pressure capable of causing injury to the human head in the process of bathing. I just can’t think near needless to talk of far!

The National Democratic Congress started taking the heat from their world bank which disappointed with low number of votes like a well-established financial institution with low patronage in the period of economic growth. The voters from the world bank were languid and the number of votes to cushion and voyage to victory was sure to precipitate! The people were angry, dissatisfied and felt maltreated by their amigo whom they have had a maximum number of votes affair with since 1992. Truth be told, history repeated itself from 2008 when the current victors lost the harmonious association with the grassroots of their stronghold, the Ashanti Region.

When they are surfeited with villainy, it is manifested on the election day, albeit, they will always give you a chirpy welcome and dance to “Nana y3 winner” or “Mahama paper” because they can’t jilt a friend because of a changed attitude. My elders put it bluntly, you don’t reject your friend because of changed attitude but you only revise your relationship with him. With a flame of anger burning in them, they will still wear a smile and dance to your obeisance and even hold the party paraphernalia up in the sky with their thumbs and index fingers and wait to vote against you on the election day with their heads.

It is weighty to reminisce that the wind of change started blowing from the English speaking West African countries, from Nigeria to Gambia where a ruler on the throne for the past twenty-two years lost to an opposition coalition. Pertinent to this revolution of change, one could have predicted with some level of dogmatism that the wind of change was going to blow H.E John Mahama and his white doves out of the flagstaff house regardless of their weight in kilograms. You may dissent because liberty is yours!

Enough of these sentences about these two political parties! Who made sure the game of no draw didn’t transmogrify into a game of fisticuffs? Who was the moderator? Who was the referee? Who declared the results and brought a moment of gratification? The answer is conspicuous even to a kindergarten kid, Madam Charlotte Osei! The woman has adduced sufficient evidence for my sentence into a prison of feminist activism in the offing. She disappointed the naysayer and made the yea-sayer proud. She is overly intrepid. I hope to marry her replica tomorrow, yes and I mean it! She passed the test with distinction which begun with the transmutation of the commission.

I nearly took a selfie with my smartphone of the newly branded voting booth. I was apathetic initially like a voter from the world bank of the current losers but I couldn’t resist the allurement of the voting booth. At some point, I thought of dognapping the voting booth instead of the ballot box. What! What about the period to period press briefings and the unbreakable smaller machine which continued to say “verified” without getting too enervated unlike in 2012? I can boundlessly write about her commission. I am not saying she is unblemished but she has chalked a major milepost in our electoral proceedings culminating into consolidation of our democratic gains. Simply put, Mama Charlotte was the victor, the feminine with masculine features!

The seventh parliament is a place to put a magnifying glass on for the next four years with the kvetching opposition and the mollified rulers. Oppong Nkrumah is in parliament with Ofoase Ayirebi’s seat. Anthony Karbo has finally effectuated his aim of entering parliament by causing a political tsunami at Lawra Constituency. Equally did the constituents of Kwabre East give their mandate to the 22-year-old whippersnapper. The veteran Ambrose Derry is back to represent Nandom!

It is self-evident that more “babies with sharp teeth” have entered parliament on the ticket of the National Democratic Congress ready to bite hard on the ‘one this, one that’ utopian promises of the Akuffo Addo led administration. I hope Suhuyini will speak big sensible grammar on the floor of the house unlike his foreganger who was silent like someone who believed in the saying that “silence is golden”. Ras Mubarak also made it to parliament with the seat of Kumbungu, I hope he distinguish between being a reggae presenter and an aldermember! ‘‘Osu Lagartha’’ dumbstruck Philip Addison and pulled the Klottey-Korle’s seat along with her to parliament. I nearly forgot that E.T Mensah met his waterloo and unwillingly gave his throne to Sam Dzata George who ensuingly won the ultimate prize. What about the Communication Specialist turned politician previously at the Energy Ministry, Edward Abambire Bawa? an augment to the communication machinery of the opposition, I guess. Isaac Adongo cannot wait to perlustrate the budget of the Akuffo led government.

“God did not create us on this rich land to be poor”. The elector said yes in accord and voted. I wish H.E Akufo-Addo well. I hope our change will not be unfavourable like in other jurisdictions where the economy has slipped into downturn. The ship must not sink! Because the Ghanaian elector will not tergiversate to jettison the captain on December 7th, 2020 in much same way one captain was jettisoned. To those mulling on how to rig elections in the future, Kindly recalibrate your notes before trailing a course on election rigging because technology will not sit with arms akimbo and aloof. It will expose you!

With my polished shoes looking up to God and my pair of ironed khaki trousers on every Monday morning, I can’t wait to manage one of the factories after graduation in 2018!

Don’t fear only Delegates but fear also the imperium of the thumb. Something to chew on!

“I know I am intelligent because I know I know nothing” [Socrates].