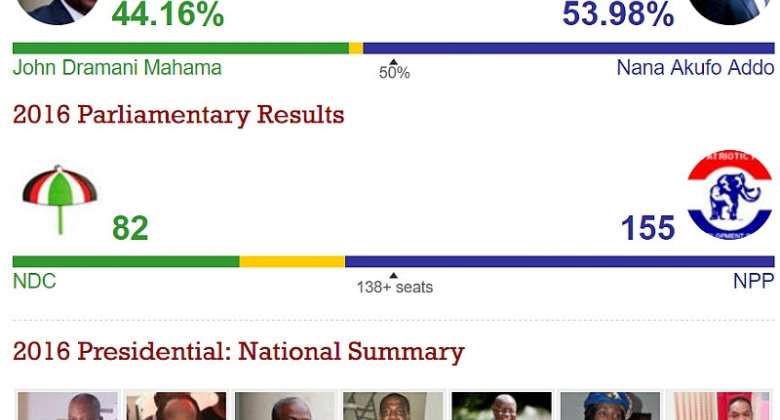 Introduction
As was communicated to the nation in the pre-election statement on Tuesday, December 6, 2016, the Coalition of Domestic Election Observers (CODEO) employed the Parallel Vote Tabulation (PVT) methodology to observe the 2016 presidential and parliamentary elections, just as it did in 2008 and 2012. CODEO employed the PVT to independently verify the accuracy of the presidential election results as declared by the Electoral Commission (EC). As of midnight on Election Day, Wednesday December 7, 2016, CODEO was in the position to verify if the presidential results reflected the ballots cast at polling stations.

The PVT Methodology
The PVT is an advanced and scientific election observation technique that employs well- established statistical principles and utilizes Information Communication Technology (ICT) to observe elections. The PVT involves deploying trained accredited observers to a representative random sample of polling stations starting at 6:00AM. Throughout the day they observed the process and transmitted reports in real-time about the conduct of voting and counting as well as the official vote count to a central election observation point using text messaging.

The PVT technique has been deployed successfully around the world to promote electoral integrity and help defend the rights of citizens to vote and to protect such rights when exercised. The first PVT was conducted in the Philippines in 1986. Since then, the methodology has been deployed in election observation in Bulgaria, Chile, Croatia, Guyana, Indonesia, Montenegro, Nicaragua, Panama, Peru and Ukraine. In Africa, the methodology has been deployed successfully in Madagascar, Malawi, Uganda, Sierra Leone, Zambia, Ghana, Nigeria, Zimbabwe, Burkina Faso, Cote d'Ivoire, Kenya and Tunisia.

Unlike pre-election surveys (which tracks intentions) or exit polls (which tracks recollections), the PVT is based on the actual behavior of electorates in an election. In other words, PVT Observers do not speak to voters about the choices they made at the polls to predict the outcome of an election. Rather after watching the entire voting and counting process, PVT Observers simply record the official vote count as announced by election officials at polling stations and rapidly transmit this information to an observation center via coded text message. Consequently, the PVT data is collected directly from polling stations.

The 2016 PVT Findings
The findings presented in this statement are based on information received from 1,491 PVT Observers located in all the 275 constituencies (including Jaman North constituency) by midnight on Thursday December 8, 2016. All PVT data was thoroughly checked for accuracy and internal consistency. A total of 553,872 Ghanaians cast their ballots at sampled PVT polling stations. The Election Commission's official results are based on 271 constituencies that had been announced as of Friday December 9, 2016.

The percentages of the valid votes garnered by each of the seven presidential candidates as announced by the Electoral Commission compared to the PVT estimates are as follows:

For each candidate the official result closely match the PVT estimates. In general, the PVT ranking of the presidential candidates based on their share of the votes is largely similar to what was put out by the Electoral Commission.

Voter turnout rate as estimated by the PVT is 69.33% with a ±0.48% margin of error. This is very close to the 68.62% announced by the Electoral Commission. The official turnout is slightly outside the PVT estimate, but the turnout figures are consistent.

Finally, the PVT estimated rejected ballots stood at 1.60%, with a ±0.09% margin of error, is also quite close to the Electoral Commission's figure of 1.54%.

Conclusions
Given that the official result announced by the Electoral Commission for each candidate falls within their respective PVT estimated confidence ranges, CODEO can confidently confirm that its PVT estimates are consistent with the official presidential results.

Further, evidence from CODEO's PVT Observers showed that voting and counting were conducted in accordance with CI.94, the electoral laws, and the Constitution.

CODEO also commends, His Excellency, John Dramani Mahama, and all other contestants for the presidential elections for conceding defeat, and congratulating the president elect, Nana Addo Dankwa Akuffo-Addo for his victory.

CODEO further commends the maturity Ghanaians have shown by remaining calm and peaceful throughout the voting, counting and collating processes.

CODEO reiterates its earlier call for the need for political parties, their leaders and the entire political class to take adequate measures to bridge political polarization that characterized the 2016 election campaign, especially between the NDC and the NPP, and to reduce the winner- takes-all tendencies in our politics. We need to do this for the sake of peace, unity, good governance and sustained socio-economic development of our dear country.

On behalf of the Advisory Board of CODEO and all its member organizations, we would like to thank the thousands of Ghanaians across the country that volunteered to serve as nonpartisan election observers and worked tirelessly to protect the integrity of the December 7, 2016 polls.

CODEO also commends the security agencies for their professionalism in maintaining peace during the period of voting, counting and collation of results.

The Coalition of Domestic Election Observers (CODEO) would also like to acknowledge the generous support of the American people through the United States Agency for International Development (USAID) and the Embassy of the Kingdom of Netherlands, which made it possible for the Coalition to observe the December 7, 2016 presidential and general elections.

In this election, it is Ghana and Ghanaians who have WON. It is not an exclusive victory for any political party or candidate.

Table 1: Distribution of sampled polling stations across regions in Ghana

Data for the PVT was collected by 1,500 well-qualified, reliable and experienced Rapid Response Observers (RROs) out of 7,000 stationary CODEO observers deployed on the Election Day. CODEO observers (including those in PVT polling stations) sent reports, including vote count figures from their assigned polling stations using specially coded text messages. These were received directly into the computer database at the CODEO National Information Center (CNIC) at the Kofi Annan International Peacekeeping Training Centre (KAIPTC). Upon receipt of text messages from observers, CODEO trained Data Entry Clerks at the CNIC at KAIPTC called observers to verify and confirm the information received. The vote count figures received into the database were used to estimate candidates' share of the valid vote count to determine the winner of the presidential election.

More Press Statement
ModernGhana Links
Challenging Heights Rescued 153 Children in 2021
Press Statement On Need For Government To Prioritise Science And Technology In 2022
Press statement by the Ghana Agricultural and Rural Development Journalists Association (GARDJA) on what government’s agricultural priorities should be in 2022
APGF: Message of condolence- Archbishop Desmond Tutu
Statement from Mo Ibrahim on the passing of Archbishop Desmond Tutu
Government Must Consider Changing Its Leadership In Parliament -Stranek-Africa
Economic Policy And Financial Statement Of The NPP Government For 2022 Financial Year And Matters Arising
Lawlessness in Parliament by a Speaker in a hurry to Dubai
End violence against women: WHO
TOP STORIES

Call e-levy a VAT increase and stop distorting our well esta...
57 minutes ago