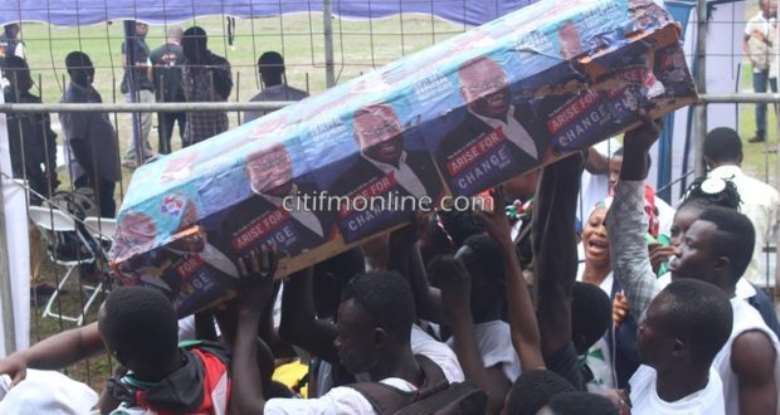 After promising to create employment but rather ending up creating unemployment empire making Ghana a destination for excruciating hardships, the next strategy of the NDC is to have Nana Addo dead.

This latest wish of the NDC took center stage during their empty manifesto launch at Sunyani on the 17th September, 2016.

Hooligans and clearly unemployed members of the NDC were seen carrying a coffin laced with photos of the Presidential Candidate of the NPP.

The unambiguous interpretation of the conduct of those NDC stooges which was not condemned by President Mahama and other leading members of the NDC can only be interpretated to mean one thing; they want Nana Addo dead!

This interpretation is justified because, it is the same NDC fanatics who are generating and sponsoring concocted stories about the health of Nana Addo. The latest story was published by Steven Malory and his African Watch Magazine.

The NDC must be told that Ghanaians know who they will vote for to make life better for them on December 7. No amount of dirty politicking and wishful thinking will give them power.

No wonder their manifesto launch in Sunyani was reduced to needless launch of invectives on Dr Alhaji Mahamudu Bawumia, a distinguished and decent politician.

Why should Ghanaians vote for a party and government that has majored in stealing the policy ideas of its opponent rather than tell Ghanaians what they have done in the past 8 years and want to be reelected?

The very Ghanaians unable to pay the school fees of their children won't go and line up to vote for the same government who is the genesis of their woes.

Is the NDC is not aware that the numerous unemployed and suffering Ghanaians know the NDC is the source of their suffering?

What about the unemployed health professionals and teachers who have been left to waste home after years of studies?

December is time for change. Ghanaians are aware of the massive corruption at every facet of life. They know who took Ford expedition to be influenced by a foreign businessman.

If Nana is unhealthy as the NDC will want Ghanaians to believe, is he the first to be sick? I rest my case.