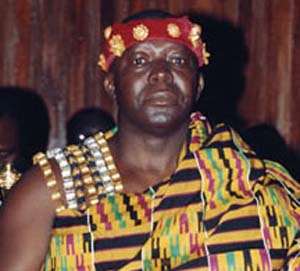 Let's continue from where we left in the first part of the letter: Just this year you have repeated the same gimmicks but in a sneaky form ever! Again you laid down the same criteria but you never followed through. You told many of your closest advisers including the soon-to-be Bantamahene's lobbyists that Mr. Sylvester Asare Owusu might not be eligible to the “Puduo stool” because of his Oyoko pedigree. We know that the Oyoko clan in Asante culture is the group from which Asantehene is drawn. So, on that account you Nana Asantehene reasoned that Bantama stool is not for the Oyoko people on the premise of customary balance and fairness. Nonetheless, you have just selected Mr. Sylvester Asare Owusu as the next Bantamahene to the surprise of almost everyone. Is he still doesn't belong to the Oyoko clan? You always say you heard about everything going on in Kumasi; well, have you heard that majority of people in Bantama do not like your choice for the Bantama stool? If you doubt it find a reliable polling agency to conduct scientific poll across Bantama and other parts in Kumasi and you will realize that people strongly believe you sell traditional stools to enrich yourself. This general belief is an open secret.

Nana Asantehene, let me remind you about another compelling case you made prior to accepting Mr. Sylvester Asare Owusu's bid for the Bantama stool. Aside from his Oyoko lineage, you pointed out it would be highly unfair for Mr. Sylvester Asare Owusu to be chosen the next Bantamahene because that meant he would be succeeding his older brother Nana Baffuor Asare Owusu Amankwatia V who just passed away this year. As you know, the late Baffuor Asare Owusu Amankwatia V and Mr. Sylvester Asare Owusu are from the same father—the late Mr. A. A. Owusu. In that regard, you contended that fairness and peaceful cooperation regarding Asante succession protocols demanded that the selection of a leader/king among the competing families shouldn't be a-one-sided affair. But, that is exactly what you have just done—back to back selection of the late Mr. A.A. Owusu's sons. Now, you have unequivocally established a precedent that Bantama stool belongs only to the children of Mr. A. A. Owusu and people well-connected to you. If that was the criteria, probably you wouldn't be Asantehene today; rather, Nana Akwasi Agyeman would have been picked to become Asantehene because of his strong connection with the then government of President Rawlings.

Nana, most likely I believe your strongest contention will be that you're the “Otumfuo, all-conquering, the immortal, the absolute monarch” so no one dares question your decision making process irrespective of how shady and flawed it may be. Plus, you may also say your forefather—Nana Osei Tutu I— specially created the Bantama stool so you have the sole traditional powers to pick and choose whoever you want as Banatamahene. We get that part.

However, all that some of us are saying is if that is your position all along then don't waste anyone's precious time, resource, and energy, by creating a false sense of hope or fake conditions that you're bent on selecting the well-qualified person and about to do the right for the Bantama stool. Better yet, stop telling the whole world you want “Puduo this or Puduo that” among the contenders, when in actuality you don't mean what say unless someone is well-connected and willing to offer you big-time money.

Nana, it is a shame and a disgrace to the institution of chieftaincy when it loses its moral bearing as it is happening in Ashanti region now because as an Asante overlord tasked to dispense justice and fairness, many of your decisions are inconsistent with truth and fairness. For you, it's all about the money. I'm not surprised if Nana Osei Tutu I (Opemsuo), the most unifying and selfless king the Asantes have ever had is shaking in his grave now, because his name is being dragged in the waters of dishonesty. There comes a time in human life where good name must trump riches. For God's sake, this shady approach to installing chiefs in Ashanti region needs to stop regardless of how wealthy the contestant(s) is!

Joseph Yamin to clear weeds in all abandoned Mahama projects...
24 minutes ago