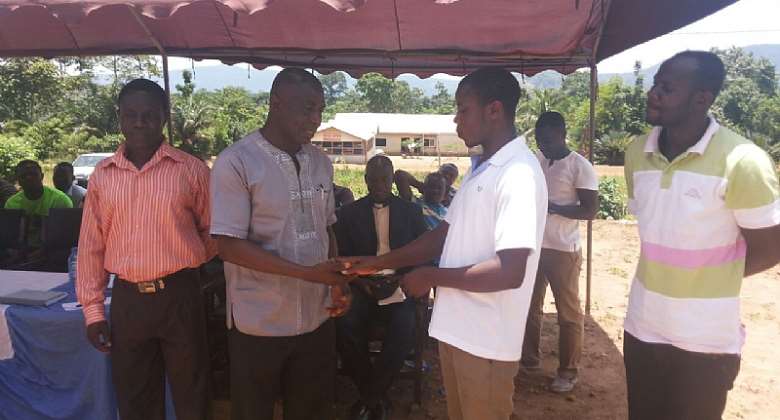 Keys to a one storey 12 unit classroom block were on Monday, April 11 handed over to the headmaster of Dzolo Senior High School at a brief ceremony attended by the Member of Parliament for Ho West constituency, Hon Emmanuel Kwasi Bedzrah, the Ho West District Chief Executive, Hon Sammy Ewoade, management and staff of Dzolo Senior High School, and chiefs and opinion leaders from Dzolo Gbogame.

Eric Monarch on behalf of the project’s consultant handed the keys to Hon Sammy Ewoade after he led the gathering on an inspection tour of the facility, with each of the 12 classrooms furnished with forty sets of students' tables and chairs, a teacher's table and chair, a cupboard and a white board. He added that, it is obligatory for the contractor to return and correct any structural defect that may occur within six months after completion of the project even though the facility has been handed over to the end user. Hon Ewoade thanked the consultant for ensuring the project was delivered within six months after award of the contract. He urged all contractors working on various government projects in the district to endeavour to abide by time schedules assigned to their projects. Hon Ewoade thanked the MP for his efforts at ensuring the district benefits from as many as possible school infrastructure projects saying all ( 8 senior high/technical schools and 2 technical institutes) 10 second cycle schools in the district have benefited from at least three government projects through efforts of the MP. He assured the people of his commitment to work hand-in-hand with Hon Bedzrah for speedy development of the district.

On his part, the MP was grateful to Hon Ewoade for not pulling his feet in facilitating the contract award process which made it possible for the project to be completed six months ahead of time. Hon Bedzrah assured the people of Dzolo of his commitment to ensuring the Dzolo Senior High School is provided with the needed infrastructure that will transform the school into a grade “A” senior high school. He said for this to happen, parents and teachers must play their supporting roles to ensure the academic performance of the students improve tremendously. He seized the opportunity to announce the re-award of the construction of the school’s boys’ dormitory to a new contractor who will move to site in earnest to complete work on the project which was started over three years ago. Hon Bedzrah appealed to chiefs to educate the youth – especially those who turned 18 years and are yet to register as voters to take advantage of Electoral Commission’s limited registration exercise scheduled to start on April 28 to register and vote in their numbers in the November general elections to retain him and his presidential candidate, HE John Dramani Mahama in power to enable them to continue to pursue programmes and policies that bring development to their doorsteps.

The chiefs were grateful to the MP and DCE for their commitment to transforming Dzolo Senior High School into a grade “A” school by providing it with modern infrastructure. They promised their continuous support for the NDC government and its candidates in this year’s general elections.