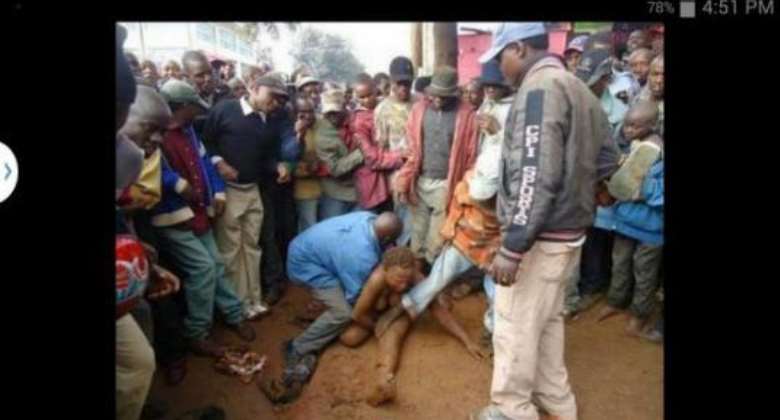 Friends,
Hear me out now. Please don’t undress a woman or man in public just because they’ve stolen something from you or someone else (as I’ve seen in some videos from Uganda). This could be someone’s mother, sister, daughter or wife, and that someone may be a good person who doesn’t deserve to share the embarrassment.

Mob justice is a characteristic of a failed state but the people doing it just make things worse. A nation which prides itself on laws, rationale and evidence has no room for acts such as: undressing women in public, torching thieves on streets, killing protesters in broad day light,e.t.c, and, individually, we all have a responsibility of stopping all these things from happening. The sooner we realise the levels of evils within our own communities the better. Just because you might be young, cool and clever doesn’t mean you don’t have a huge responsibility to guide your family and local elders.

Undressing and killing of petty thieves is something that has been going for a while, and I think a lot of sensitization needs to be done, as I see a lot of people just cheering and looking on while such evilness is taking place.

I am not a thief, though I am guilty of a few peccadilloes when I was so young, but not enough to send me to the Islamic/Catholic version of hell, if we ignore a few philosophical differences, and especially if I repent for my sins before death. However, if you look real close you may find that defining one’s self as a thief and defining others as a thief is merely a matter of degrees in interpretation. Almost everybody commits crimes to some degree, opportunistic or deliberate. Let’s forget the election thieves for now, but how many people do you know that haven’t padded a tax return to their advantage? That is a crime.

How many people speed when they think that no one is looking? That is a crime. How many people commit adultery? How many people use facilities provided by their employer, phone, computer, stationery, etc. These are crimes. I see no difference in a woman stealing food and a businessman lying about a product and charging excess prices. The woman is undressed and possibly goes to jail but the businessman remains free. So basically, people are criminals, it is just a matter of risk and degree. Take away the risk and the degree will immediately increase.

What we must understand is that people do things during bad times that they would never do, or even consider, during good times. The bad guy will take at any and all times, and never feel a hint of remorse. I bet the majority of the people who steal petty things on streets and markets feel extremely guilty about it. And no, I am not saying they do the right thing. Too many are put in circumstances through no fault of their own, that cause them to do things they wouldn’t normally do. I still condemn the thief, but I understand the “why”.

Personally, I believe most people are good at heart at the very least, and they should be given a chance to rehabilitate themselves. If you take away fear of lawful retribution, the fear of personal retribution, then what remains is just conscience.

I think that far more people would commit crimes if conscience was their only deterrent. Sometimes at our lowest moments when we feel most helpless, we need a hand to help in guiding us to the truth, and that hand could be you. Today’s thief may turn out to be a respectable member of the society tomorrow by the grace of God. If you can treat wrong doers with dignity, please do; it doesn’t matter if others approve it or not and it doesn’t matter if you are praised or not.