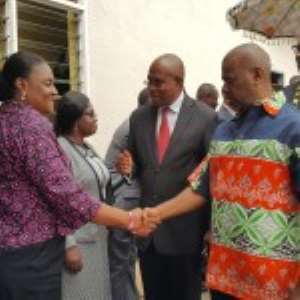 Mayor of Newark City, Ras Baraka exchanging pleasantries with Mama Julie, a top official of the KMA during his visit

He expressed delight that Kumasi and Newark had finally agreed to work together for the mutual benefit of people of the two cities.

Mr. Baraka made the disclosure on Tuesday when he paid a courtesy call on Kojo Bonsu, Chief Executive of the Kumasi Metropolitan Assembly (KMA) in Kumasi.

The Mayor of Newark City stressed the need for Kumasi and Newark City to work together to promote their developmental agenda.

“We have to build relationships to help each other find solutions to problems facing us,” Mr. Baraka stated and expressed his joy over the agreement reached.

He said both Kumasi and Newark City stand the chance of developing economically, politically, socially and culturally through the relationship.

Kojo Bonsu also lauded the sister-city project, stressing that both cities would transform tremendously in a short period.

.
He said KMA could tap the knowledge of Newark City, especially in the areas of technology and waste management which had become a challenge in the city.

The Mayor of Newark City, who is expected to spend three days in Kumasi, also visited the Komfo Anokye Teaching Hospital to assess the medical facility.

Mr. Baraka, who is passionate about education, also visited educational institutions in the city, including the Opoku Ware and St Louis Senior High Schools.

The Newark City Mayor also visited historical places like the Elmina Castle at Cape Coast and other places in Accra.

'Akufo-Addo's people not talking to me anymore because of my...
53 minutes ago