Daniel Obinim: The Spiritual Dog In A Quack Republic 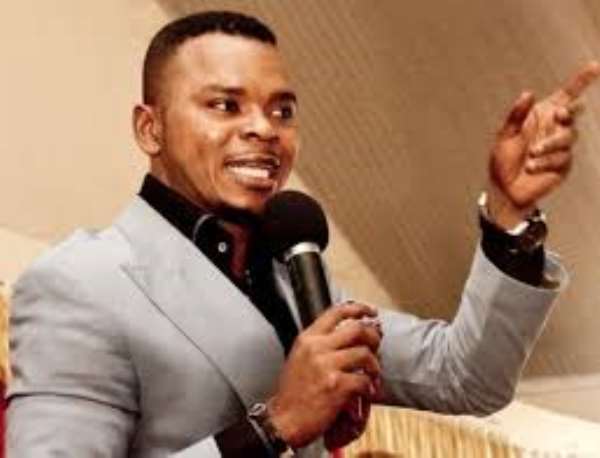 So after several curses and insults at his critics, Obinim has descended to the spiritual gutters to reveal his full stature? The viral video of Bishop Obinim is no news to me and if you are an avid reader of the bible, you will not be surprised either. He leads the pack of scandals in the religious industry ever since he came on the scene.

Though I am nowhere near spiritual expertise, I am shocked that Cwesi Oteng naively defended the flamboyant preacher who peddles gimmickry and scandals than he preaches the gospel. Cwesi tweeted that it is possible for a man of God to transform into anything since magic men do same. Mercy!

But thank God there has not been a unanimous defence or silence from Christians. Since social media became awash with the video, the magic-making pastor has largely been criticized by Christians and I’m learning that Bishop Charles AgyineAsare has described Obinim’s operations as “sorcery hiding behind church”.

Forewarned is forearmed, that is why Jesus who knew the list of fake prophets that would parade the various corridors of religion forewarned the world to “Beware of false prophets, which come to you in sheep’s clothing but inwardly are ravenous wolves”. And how about Apostle Paul’s admonishing in Philippians 3? “Beware of dogs…for their god is their belly”. So it is scriptural that Obinim is a dog―spiritually.

Bishop Obinim, you have not shocked any sane believer. You are really what you say you are—at least, spiritually. I am sure the devil is not happy to transform himself into an animal anymore that, perhaps, is why the bible foretold us that the devil pretends to be ‘an angel of light’ (see 2cor 11:14).So I don’t believe any preacher of Christ will transform into a spiritual bottom feeder, probably to scavenge the refuse dumps, biting and doing the dirty works.

The bible and science are clear on the classification of humans as higher class beings —if you would allow me. That is why I cringed with a ‘borborigmic’ pain when I watched the video and promised not to watch the crap again. I was in a company with friends on the streets of Navrongo when some very dirty pigs were crossing the road and one friend exclaimed, “wait Charlie, these pigs could be Obinim and his junior pastors, just let them pass…hahahaha”. So I asked what the mischievous joke meant and I was shown the video. I have since come across a BECE question on peacefmonline.com making mockery of the pastor. This means he has elevated his status to a trivia for gossip sites and news portals, and more so, an examinable content or a case study for theological discourse. Also, the ‘showboy’ has updated the boring Religious and Moral Education syllabus for our kids. He will be a good icebreaker for teachers during lessons since he likes the song our children dance to: “Osofo w) krom, mi w) krom”.

You see, transfiguration took place in the bible but hey, Jesus transformed himself into a heavenly being of glory on the mount of transfiguration not into a lower class animal. No! Another scene of transfiguration was King Nebuchadnezzar in the book of Daniel. The king was punished by God because of arrogance. Was Obinim punished by God? Unlike Obinim who claims he transforms himself into snake , dog and any animal as a privilege for which he boasts, Nebuchadnezzar recognized his experience as a demeaning experience for which he repented. So? So Obinim’s powers are in so much doubt. And Moses? It was a rod that changed into a snake and not Moses himself. You see, God can breathe life into a non-living rod so it becomes a living thing and that’s a miracle. On the other hand, the devil can also change you into dirty animals because he wants to debase you.

HOW DID ALL THESE COME ABOUT?
It all started because we are taught not to question spiritual things. If you dare question you are considered a spiritual weakling as they are quick to quote “touch not my anointed…” as if the anointing is for a sacred few. Such scriptures have become the shield for many pastors who are drifting from the core message of salvation. It is therefore no wonder how people like Obinim would virtually turn humans into dummies: stepping on them, biting, and kicking the womb of pregnant women as acts of healing. I do not see almighty Jesus stepping on humans. I just can’t fathom it—or can you?

It all started because we are a quack people who are easily deceived. How many times haven’t the police arrested fake police officers, doctors, teachers, fake businessmen like owners of Little Drops and DKMs and so on? We have watched a fake Nobel Prize scientist on our national television.

Go to the streets and see how many young people are wielding ‘rich’ business cards pretending to have big connections when all they do is cyber fraud. And then the politician who comes in the name of everything we ever want and after four years leaves things worse. We are surrounded by sham religions which profess peace but take to machetes, guns and clubs over issues concerning graveyard. We are a people who take anything.