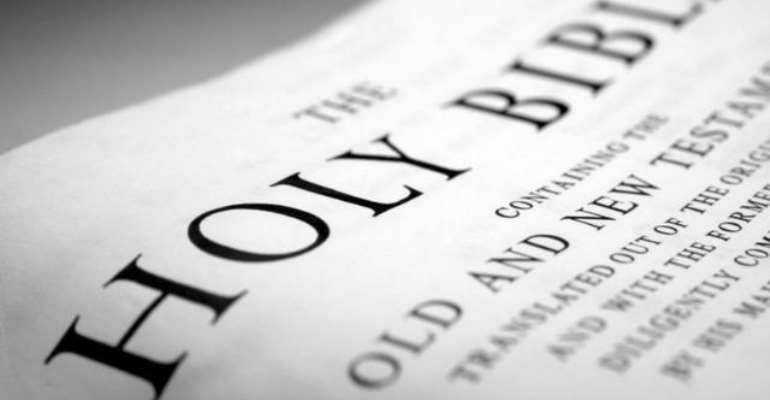 Dear Max, thank you for the comments you have made about my article—Hurray! The Name JESUS CHRIST Finally Deleted In Latest King James Version Bible!!—which was published in the Modern Ghana website not long ago. I would like to respond to them by publishing this letter in the same website so that many more readers may also be blessed by my response.

May Elohiym be praised, and you too thanked for saying: “I hundred percent agree with you that ‘Christian’ and for that matter ‘Christianity’ is the creation of human beings. The New Testament believers did not describe themselves as ‘Christians’! It was at Antioch, far away from Israel the origin of salvation, that the disciples were first described as Christians (Acts 11: 26). The term ‘Christian’ was then, a derogatory jargon, used [by others] to describe the disciples”—words in parenthesis are mine.

I am sad that these facts that you express are unknown to today’s twenty-first century breed of Christians! I cannot comprehend why mankind today, who prides himself as being much more knowledgeable and sophisticated than his kinsmen of the fourth century—the time Christianity first came into being—is proud in calling himself “Christian”, an uncomplimentary and highly derogatory term of his primitive past!

And dear Max, as you also rightly said, that Christianity is the creation of human beings, why do people today believe in Christianity as if it was created by Elohiym to save them? And if Christianity does not originate from Elohiym, why do Christians naively think and believe its teachings would enable them get to be with Him in Shamayim (Heaven?).

In stating that both Christianity and the Christian personality are the inventions of human beings, you sadly fell short of stating the obvious—that the name JESUS CHRIST, which is the driving force in every Christian, is also man-made and, therefore, bereft of saving power!

That would have added a huge backing and force to my article under reference and stirred up Christians to rethink their faith, and more so, at such a time that the name JESUS CHRIST has been struck out of the King James Version (KJV) Bible—one of the first to introduce the English name JESUS CHRIST to a highly gullible and unsuspecting mankind as belonging the Ivri-born Savior.

By deleting the name JESUS CHRIST from the KJV and replacing it with Yahushua, the publishers of this Bible admit error and take blame for deceiving their readers since its first publication in 1611 CE. They now seek to mitigate the effect of their deception by their Restored Names King James Version Bible in which they have restored the true Ivri names—Elohiym and Yahushua—by which the Almighty and His Son were respectively known in the Ivrit Holy Scriptures!!

My article under reference sought to draw the attention of Christians to this and warn them of what the name JESUS CHRIST portends for them, and also to bring them up to speed with current trends in mankind’s search for the true saving Word of Elohiym.

Let me turn to the issues with names that you raised by first quoting your own words for you: “My brother, anyone who calls the name Yahushua with the Son of God in mind will be saved but if the name is mentioned in vain, nothing will happen”.

Of course, this is a correct statement because anyone’s thoughts and actions must be in sync for that person to get good results! And in this case, because the correct name of the Son of Elohiym is Yahushua, which He has given by His own authority and power to His Son, when you rightly call out this name intending for him to save you, he will do so because you honor Elohiym by calling on the right name of His Son.

You see, the Son of Elohiym himself, knowing what true name his Father has given to him, can only respond to Yahushua, and is under no obligation to you to respond to any other name by which you choose to call him or seek to compel him to respond to—JESUS CHRIST included!!

In this, your knowledge and faith in the name Yahushua and your corresponding actions, which are your calling of the name Yahushua, rightly, would get you the attention and the salvation you are requesting from the power of that name. Remember Acts 4:10-12—for there is no other name under Shamayim by which sinners can be saved except the name Yahushua!

So then, if you call the wrong name “JESUS”, all because some bible translator has deceived you to never know the name Yahushua or misled you to swap Yahushua with “JESUS”, you will definitely NOT get any response from Yahushua, simply because your mind and your actions are out of sync. Nobody responds to a name which is not his own!

So, because the Son of Elohiym was never called JESUS by his Father, he is under no obligation to respond to it. In fact, all who call on the name JESUS do not have faith in Elohiym because you can only have faith in Him based on what words He speaks or utters to your hearing. Remember Romans 10:17?

Did Elohiym ever mention JESUS to your hearing? No and never! It is bible translators who did; utterly deceiving you! When you act on the word of translators, you may even be acting on deceptions or falsehoods and on the instructions of Lucifer unaware; and, thus, you will not be acting in faith!

All who act on JESUS have no faith at all in Elohiym, but in translators! And if translators were ever, per chance, misled in their work by Lucifer the master corrupter of the Word of Elohiym, and in their evolution of the name JESUS in particular, then all and every believer in the name JESUS only acts on the falsehood and deception of Lucifer!

Do you think that Elohiym must honor such a misled and deceived person who calls on the name JESUS by granting Him His salvation, simply because, when he was calling the name JESUS, he had a strong conviction in his mind that he was addressing the Son of Elohiym in so doing?? This should not be; for you get what you ask for, order or demand, and not what you think you ordered!!

Dear Max, did you really mean this, that, “It is not the name Yahushua the makes the Son of God who He is. It is He who makes the name what it is. He existed long before the name”?

No! This cannot be!! Every name, like any noun, is a thing of substance that is visible and tangible! A person’s name encapsulates him—his very being, origin, destiny, character, wisdom, wealth, etc—and makes all know and see him as such! You cannot act differently from what your name is or stands for! That is why the true name of the Most High One is a strong tower that the righteous run into to find safety—cf. Mishle (Proverbs) 18:10.

So then, your name makes you! You become your name!! A childless man who was known by the name Avraham, meaning “The Father of Many Nations”, eventually became a father, as all who addressed him by the name were unwittingly calling on Shamayim to establish and make real or visible for all to see, the destiny of the man encapsulated in and woven into this name of his!

By the way, why do you say the Son of Elohiym existed long before his name Yahushua? That cannot be! What name do you suppose the Father called His Son by when both were in Shamayim, before He sent a malak (angel) to deliver to his would be parents the name by which all on the earth were to forever call His Savior-Son when born?

The name of every person, being a word and thus spirit—cf. YahuKhanan (John) 6:63—exists before that person’s birth; and so the name Yahushua existed in Shamayim before the Savior was born to earth!

By malak GavriEl’s two visits to earth to announce this name, Elohiym intends it to forever be known as such for mankind to express faith in, and that it should be the only name that is legal tender for all transactions between Earth and Shamayim. How could Bible translators change this name to JESUS CHRIST??

Your last comment was: “And Yahuwah? Where did the vowels "a" "u" "a" come from since the original Hebrew text rendered the name YHWH with no vowels?” I am sure every Gentile student of Ivrit knows that words written in Ivrit alephbets do not feature any vowels but that those whose father tongue is Ivri are able to insert vowel sounds as they read along. This is what makes this language special and the only language Elohiym speaks in and out of Shamayim!!

Vowels were introduced by Ivri teachers of Gentiles as they transliterated Ivrit words into Gentile languages to enable their Gentile students learn some rudiments of the lingua franca of Shamayim and the nation of Yisroel!

So, even though all Ivriim (Hebrew men) knew YHWH as Yahuwah but only chose to refer to it as HaShem [meaning the Name], Gentiles had to be helped to pronounce it by the insertion of the appropriate vowel sounds!

Dear Max, I hope this response of mine to your comments will help you see my article under reference in clearer perspectives and aid you in your convictions so that you are now better prepared in your search for TRUTH in the coming year, 2016. Shalom aleikhem.

PS: Should readers of this and any of my articles have serious questions or suggestions, they may contact me via e-mail by clicking on “Contact” on the Home Page of my website, http://sbprabooks.com/BongleBapuohyele. You may also purchase a copy of my book—Beware of This False Doctrine: Of Reciting the Sinners' Prayer for Salvation—via the same web address so, together, we walk the narrow way to the presence of Elohiym.