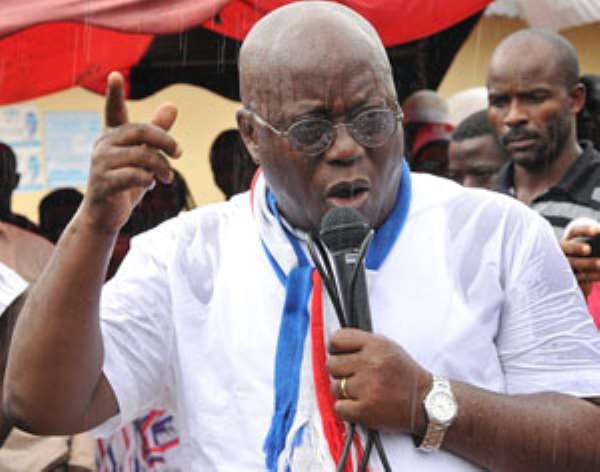 Charity, they say begins at home. Therefore, you cannot claim to be a good father to outsiders when all your children have gone or going wayward. Indeed, you cannot consider yourself as a consensus builder when your mere presence scatters your family members or friends. In the same vein, you can never claim to hold the magic wand to build Ghana when severe fire is raging in the so-called political party you are leading.

Nana Addo Dankwa Akufo-Addo, the 2016 flagbearer of the NPP, has never been a smart politician. Because I stand for nothing but the truth, I have said it multiple times that Akufo-Addo pretends to be smart but in reality, he is not. Those who have misled Akufo-Addo into believing that he is next to God and therefore untouchable and unaccountable to any human being, and are still gradually leading him to his political doom, will never stomach this blunt statement from me, but that is the daylight truth.

We all know that Nana Akufo-Addo was elected the NPPs flagbearer way back in October 2014. At that time, one laughable reason assigned to the early presidential primary was that it would give the winner ample time to campaign relentlessly until the “D-Day” in 2016 presidential election. Nevertheless, we all also know that Akufo-Addo’s terrible ego and pettiness has prevented him from doing anything credible on the campaign trail ever since he was elected the flagbearer.

For one year now, Akufo-Addo has been sitting at his Nima residence, which he claims as the shadow seat of government, just to receive visitors who come to massage his back, whisper untruths about other NPP folks to him, and issues political statements based on the political wind of the day. That is how Akufo-Addo has conducted his political business since he was elected as the flagbearer. Nothing more!

Indeed, with 15 months to go for the 2016 presidential and parliamentary elections, Nana Akufo-Addo’s unofficial 2016 Campaign Manager is his wife Rebecca, who he always travels outside the country with, to raise funds for his stumbling campaign, or attends multiple funerals and parties with in Ghana.

Nana Akufo-Addo, again is traveling with Rebecca in his “Rise and Build Tour”, of the 10 regions of Ghana, when the NPPs front is torn apart with in-fighting, backstabbing, mistrust, accusations of embezzlement and murder, disrespect, the rampant release of multiple tapes discrediting the NPP, and spiced with Akufo-Addo’s behind the scenes scheming and manoeuvring to remove the NPP’s National Chairman and General Secretary from power at all cost.

This is the mark of a terrible politician whose zeal to become president at all cost does not allow him to first “put his house in order”. By saying that Akufo-Addo is not a smart politician, all what I mean is that Akufo-Addo does not believe in numbers. He only believes in his praise worshippers and singers. Anybody outside Akufo-Addo’s myopic political landscape is considered a political enemy and nonentity.

Otherwise, how can somebody who is seriously promising voters everything from total eradication of poverty to building Ghana into becoming a “second heaven” when given the nod, go to war by scheming to side-line his war generals? Never in the history of politics has a flagbearer gone to elections by pushing the party’s national chair and general secretary aside. However, we are seeing that in Ghana for the first time, and this culprit is no other person than Akufo-Addo.

There is chaos everywhere in the NPP. Some of the NPP folks are in denial, but that is the reality. You may still hear and see the NPP hirelings still screaming their heads off on television and radio stations, but they admit privately afterwards that Akufo-Addo is leading the NPP to doom.

How can a serious politician leave the stoking fire in his party behind and get the nerve to say that he’s embarking on a “Rise and Build Tour”? Whom is Akufo-Addo encouraging to rise up? In addition, whom is he going to build with when he has left the NPP more divided than he inherited it as a flagbearer in 2008?

To add insult to injury Akufo-Addo put the cart before the horse. After being hammered severely by people from all sides of the political divide, he finally came out to say that he would do all what he can to unite the NPP. So does that mean that Akufo-Addo knew that the NPP was divided but decided to ignore it and embarked on the tour nonetheless? Akufo-Addo is not a man to be trusted. He always does window dressing when pinned to the wall.

Those who are very close to him will tell you privately that Akufo-Addo is the pettiest unforgiving person you can ever imagine. Once you cross his line, you become his enemy for life.

I have said it before that Akufo-Addo will never be President of Ghana. Nothing has changed. I still stand by my statement. Between Paul Afoko and Kwabena Agyepong, NPPs National Chair and General Secretary respectively, Akufo-Addo is toying with over 60,000 votes or more, enough votes that can send him to become a political nonentity in the 2016 presidential vote.

Currently, there is so much bad blood in the NPP that Akufo-Addo does not have what it takes to bring the warring factions in the party together. Akufo-Addo’s divide and rule tactics, which started back in 1978 when he bolted the Danquah/Busia party to form the United National Convention with his uncle, Paa Willie Ofori Atta has finally caught up with him. No one teaches an old dog any new tricks. And since old habits die hard, and a leopard shall always have spotted skin, Akufo-Addo can never do any make-up to change his old character trait.

Trust me, there can never be any peaceful resolution of the burning fire in the NPP if Akufo-Addo does not humble himself, and truthfully apologize to ex-president JA Kufuor, for all the things Akufo-Addo’s hirelings have hurled at Kufuor. And even if after the apology Kufuor does not accept it with all sincerity, that apology will not count.

Akufo-Addo is his own waterloo and worse nightmare. He behaves as if he’s the monarch of all that he surveys and is no respecter of persons. Therefore, how can we entrust Ghana to somebody like him. Have you ever imagined how a Ghana under Akufo-Addo’s government would look like? Chaos might be an understatement. And jungle warfare might not be a close description.

Nana Addo Dankwa Akufo-Addo, if indeed you really want to rule Ghana, first remove the speck in your eyes by bringing the NPP together before rising with them to help build Ghana. Your eyes are too dim at this time to realize that Ghana indeed needs a unifier than a divider like you.