Beware! The English Bible Is A Forgery!! 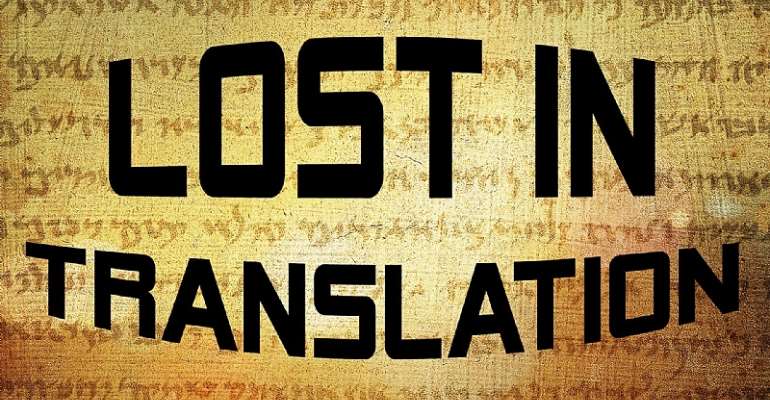 I am a Ghanaian sexagenarian male author resident in Ghana. I have many serious messages for all Bible-believers of the world, one of which I present in this short features article. May it profit all its readers!

My only published book yet—Beware of This False Doctrine: Of Reciting the Sinners’ Prayer for Salvation—had its latest edition (the Elohiym Edition) released by its publishers in the USA on 21st May, 2015. You may want to do a read of a Press Release to this effect via the URL http://www.prlog.org/12457620 .

While working on this edition of my book, which is based solely on my understanding of the English Bible, I discovered that names and titles ascribed to almost all Hebrew players in the biblical narratives were wrong!

All the names and titles belonging to people of Hebrew descent in the Hebrew Scriptures were translated into or rendered as so-called English equivalents by translators, instead of maintaining them in Hebrew as were revealed in the Hebrew text that originally featured them.

In clear distinction, however, all names belonging to non-Hebrew players in the Hebrew Scriptures have been maintained to be same in the English Bible—none of them has been translated or rendered differently.

And so, all Latin, Greek, and other non-Hebrew names were never tampered with: Caesar, Herod, Pontius Pilate, Agrippa, Festus, etc, are same in the English Bible as they are in the Hebrew Scriptures.

This inconsistency in the work of translators, I deem to be in violation of the basic principles of translation. Names and titles, like all other proper nouns, must never be translated but should instead be transliterated and, thus, made to sound exactly as they do in the original languages being translated.

In other words, for example, the typical Ghanaian Akan male name, “Kofi Mensah”, must remain same in all the languages of all the cultures of the world—Hebrew, Dagaare, Xhosa, Fulani, English, Sinhalese, Wangara, etc—in any stories told about him in these non-Akan languages.

This single violation of the principles of translation runs through the works of all Bible translators, down through the ages, and has, thus, consistently, done damage to the truth of the Holy Scriptures.

In our world today, this damage to the truth by this violation seems to have even been willfully magnified by translators in the emerging editions of the English Bible—as seen in their so-called “amplified”, “revised” and “red letter” versions—than in the past. For, who can amplify, revise or echo the Word of the Almighty for Him?

Readers of the English Bible seem, to me, to have been forever and purposefully denied knowledge of the genuine Hebrew names in the Hebrew Scriptures, the meanings of these names and their relevance to the salvation they seek, in their reading of the English Bible simply because these Hebrew names have been rendered into English “equivalents” in it!

In particular, the Hebrew name of the Almighty and that of His Son may never be known by Christians and other zealous users of the English Bible before exiting Earth! How sad and how disappointing!!

The Almighty is neither called by the English name “God”, nor is he called by “Yahweh”, nor by “Jehovah”, as have been wrongly ascribed to Him in the English Bible. Instead, His two principal appellations are Elohiym and Yahuwah; and must remain so, forever and ever, in Shamayim (Heaven) and in all the Earth!

Also, the name and title of His holiest Son are not JESUS and CHRIST, respectively, as they are commonly believed to be in our world today, by Christians and non-Christians alike, but they are Yahushua and HaMashakhYahu, respectively!!

It might interest our world to know that whoever the English Bible calls “Jeremiah” ought to have been called YirmeYahu; that Hezekiah ought to have been KhizkiYahu; Zechariah, ZecharYahu; Matthew, MattitYahu; John, YahuKhanan; and up to some 139 Yahu-prefixed or Yahu-suffixed names belonging to holy Hebrew men who had something to do in the execution of the salvation plan of the Most High One for mankind, all of which are now practically unknown!!

The only true and genuine name of the Savior destined to bring salvation to all—cf. Acts 4:10-12—is not JESUS, as English translators seek to make readers of their Bibles believe, but Yahushua! For, Yahushua is the Hebrew name of the Savior—meaning YAHUWAH saves, YAHUWAH brings salvation, or YAHUWAH is salvation—which a malak (angel) of Elohiym delivered from Him to mankind on two separate occasions—cf. Matthew 1:21, 22; Luke 1:31, 3:21.

The mission of this malak was intended to ensure that the Earth would never make the mistake of ever addressing the Savior by any different name in all of mankind’s history and dealings with Shamayim!! But alas, the English Bible would have mankind believe that the Savior must be called JESUS!!

The fact is that, on the day the Savior was sacrificed, any stranger to Yisroel who found himself on Gulgotha asking the question: “What is the name of this man hanged in between these two other men?” would not have had a single person in Yerushalayim tell him it was “JESUS CHRIST”!! So, what was a lie then remains a lie today, since lies, being spirit, never die out!

By these translations of names, the English Bible gives itself up as being a forgery—for, strange names have been forced into an otherwise pure and holy Hebrew word—and thus, has become incapable of delivering the potent message for mankind’s salvation as is intended by Elohiym!!

I dare say the English Bible is fake, counterfeit, and fraudulent! Its message defrauds mankind of the saving-power in the message Elohiym delivered to mankind in Hebrew! For there is no name under Shamayim by which mankind must be saved but YAHUSHUA; a name sadly nonexistent in English Bibles!!

The world must be delivered from the harm caused it by having a name—JESUS CHRIST—forced upon it as if belonging to the Hebrew-born Savior! At the time the Savior was born and lived, ca. 4 BCE-30 CE, the English race had not yet evolved on Earth and so the English language even in its crudest form was unknown!!

And so, John, Jonah, Joseph, Jerusalem, and all the host of names starting with the letter “J” in the English Bible can neither be considered to be of Hebrew origin nor as belonging to Hebrews. Therefore, if the Hebrew Scriptures had not been translated into English, none of these “jay” names would ever have come into the thinking of salvation seekers, at all! Mankind would then have been better off without all these “jay” names in the English Bible; JESUS included!

All English names in the English Bible that were translated from Hebrew must, therefore, be considered as belonging to people of mistaken identities—for, assuredly, it was not JESUS who was begotten to Yosef and Miriam to die for the salvation of mankind; nor was it John the son begotten to ZecharYahu haKohen (the priest) to later on baptize the Savior, his direct cousin; nor was anyone called EliJah or Jeremiah ever a navi [nabiy] (prophet?) in Yisroel!!

From the foregoing, it is clear that Bible-believers have imbibed a falsehood, unaware, and fed to them by translators! It is simply of evil intent for Bible translators to claim in Acts 26:14-15 that the Savior, in speaking in Hebrew to Sha’ul on the latter’s journey to Damascus, emphatically introduced himself as “JESUS”, an English name—and thus, obviously mixing Hebrew with English—at a time when English was yet to be known by mankind. Absurd, isn’t it?

These kinds of absurdities in the English Bible, many of its readers don’t see; and may never. This is why I write this article cautioning all Christians not to consider the English Bible as “This is what the Almighty says” or swallow it hook, line and sinker!

May this short piece kindle some serious thinking and stir up debates among bible-readers towards arriving at the truth of the Hebrew Holy Scriptures! Shalom aleikhem.

The writer is an author. His website address is: http://sbprabooks.com/BongleBapuohyele