Sodom And Gomorra In America: Together We Fall, Divided We Stand 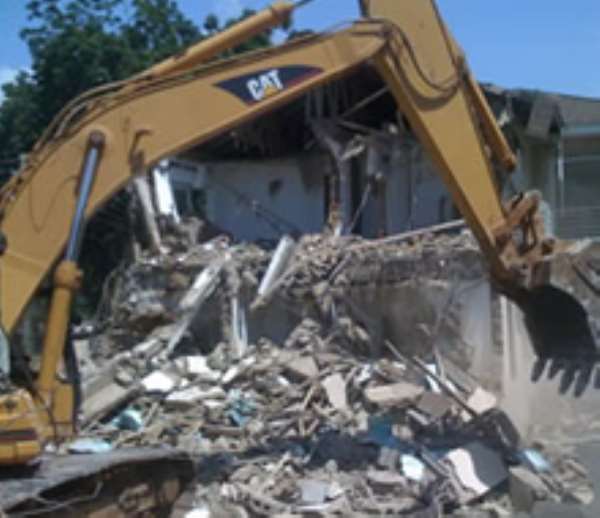 As Ghanaians are destroying Sodom and Gomorra, Americans are busily building the twin evil city. Most Americans have shown to the world that they are turning morality upside down. On Friday, June 26, 2015, the Supreme Court of the United States of America ruled in support of homosexual marriage.

The decision that was closely contested by the nine judges (5 for, and 4 against the practice) marks a major moral shift - a shift for evil - in the history of the United States of America. The ruling of the Supreme Court of the United States brings to the fore that indeed biblical morality is under attack. The ruling also shows that America has reached the acme of moral degeneration.

Africa needs to be watchful. The evil of some citizens of the US is likely to find place in Africa through their NGOs and loans. It is said that when America sneezes, the world catches cold, but this is the time for African leaders to prove to the world that if America sneezes, America would increase her cold, and die out of it if she does not repent. We, Africans, need to work hard to redeem ourselves from progressive retrogression that continually tie us to the apron strings of the so-called developed world. Our leaders and all of us must eschew corruption, nepotism, ethnocentrism, and partisan politics that have militated against our progress as a people, and placed us at the mercy of the so-called developed world. We must assert our political and economic independence, for it is our dependence on the so-called developed world that explains the reason why they have always haboured the desire to shove down our throats their evil policies. The corrupt and depraved culture of the West is forced on Africans because Africans always gone cup-in-hand begging for aid from the West. There is a Wolof saying that, ‘if you borrow someone’s leg to walk, the person directs where you go.’ We have walked with the legs of the West for far too long, and it is time for us to use our own legs to walk. The bible is patently clear that the borrower is a slave to the lender (Proverbs 22:7b). We cannot continue to be at the beck and call of the so-called developed world.

I deprecate the attempt by some Africans who try to romanticize the African past, by saying that homosexuality is foreign to Africans. Homosexuality is never foreign to any culture. From the works of anthropologists, it has come to the attention of the world that depraved cultural practices such as homosexuality had existed in virtually all known human societies. I have interacted with my colleagues from South Africa, Eritrea, Burundi, Ethiopia, and Tanzania, and they have all concurred that homosexuality had existed in pre-colonial societies of their respective countries. What is new is the attempt to legalize what is private as a public practice. Transposing what is private into the public space is what Africans loathe. This is because much as homosexual practices is indigenous to some pre-colonial societies; the practice was the exception rather than the norm. Also, the practice was clandestinely practiced since it was widely seen from a condescending lens.

Some homosexual advocates have mischievously presented some African practices, such as woman-to-woman marriage, which was widely accepted, among groups such as the Igbo of Nigeria, as an example of homosexual practice in Africa. This is absolutely an attempt to spuriously twist a cultural practice to support the evil of homosexuality. Woman-to-woman marriages had nothing to do with homosexuality. It was a social practice in a patriarchal society to ensure the perpetuity of a group. Here is how the practice worked in society: A woman who has money marries another woman by presenting the bridewealth. After the marriage is contracted, the woman gives the woman she has married to a distant male relative to consort with. Children born out of the relationship are considered the children of the woman who presented the bridewealth. This is because in many societies in Africa, it is the bridewealth that gives birth. The woman then becomes the pater of the children. The logic of the practice in patrilineal societies was to make it possible for a family that had only female children to ensure the continuous existence of the family/lineage.

The principle upon which homosexual practice is based is also inconsistent with African cultural norms. Homosexual practices thrives on the assumption of liberalists, who argue that the individual has absolute right to do with his body what he wants to do with it. This dovetails with John Stuart Mill’s assertion that the individual has absolute sovereignty over his body. According to Mill, the individual has the absolute right to do with his body what he wants, especially if by so doing, he does not hurt others. So in the logic of libertarianism, the individual can practice prostitution, homosexuality without any let or hindrance, since such practices do not have any impact on the third party. Jeremy Bentham, who also wrote in support of libertarianism, dismissed the idea of community. According to him, community is simply a fiction. The individual is absolute individual. This conceptualization of a person contradicts the African notion of a person. In Africa, a person is a social being, who finds meaning in life by belonging to a community of another human beings. This understanding of the person finds expression in the Ubuntu philosophy, expressed by John Mbiti as, ‘I am because we, and since we are, therefore, I am.” The sociality of a person is expressed in the Akan proverb as ‘Nip hia moa’, to wit, ‘man needs help.’ Among the Akan, a person is never an island to him/herself.

So, for us as Ghanaians and Africans, homosexuality is an assault on our notion of a person. This is because it gives absolute sovereignty to the individual at the expense of the larger society. While individuals have interests, it is the interest of the community that takes precedence. So, if society proscribes homosexual practice, the individual has no choice except to conform. The argument, then, is who constitutes the community? Yes, this is a logical question, but the point is that society thrives on basic established principles. In most African societies, religion serves as the major source of morality. So, good and bad are largely determined by God, the deities, ancestors, and other benevolent spirits. In other words, to question the origin of collective interest is to question the very foundation of the society.

Thus, for us as Ghanaians and Africans, homosexuality is an affront to our cultural sensibility. It impugns on our cultural values. It is this that emboldens us to fight tooth and nail any attempt by the West to compel us to accept homosexual practices.

The genetic argument for homosexuality can also not be accepted. The genetic argument is that homosexuals are born, not made. This argument is inane and devoid of commonsense. There are lots of practices that are believed to be genetic-related. For instance, it is said that kleptomaniac is genetic, and yet we don’t legalize the practice. If psychologists are right that kleptomaniac is genetic, then we are incriminating people who have no control over their dispositions. Left to depraved man, everything is permissible. Since the fall of Man, our inclinations have always reflected our total depravity. So, if we are to follow our inclinations, everything will be permitted, and at the end, communal life will be impossible. We have laws and values because we want to checkmate on the expression of our undesirable inclinations, and to enforce communal living. In consequence, the argument that homosexual practice is consistence with genetics is not supported by commonsense.

Lastly, as Christians, we believe that the bible is categorically against homosexuality. Since our worldview and point of reference is the bible, we resist homosexuality because our God reprimands it. So, homosexuality is unacceptable, because the bible says God is against it.

I end by saying that while I loathe homosexuality, I am also against any attempt to kill, maim, or discriminate against homosexuals. Judgment belongs to the Lord. My duty is to voice the concerns of God using the bible as the foundation, but judgment, however, is in the hands of God. It is not my duty as a Christian to kill, maim, or/and discriminate against homosexuality. My noble duty is to tell them the truth in love and allow the Holy Spirit to do the work of conviction.