The Hidden History of US Credit Card Empire 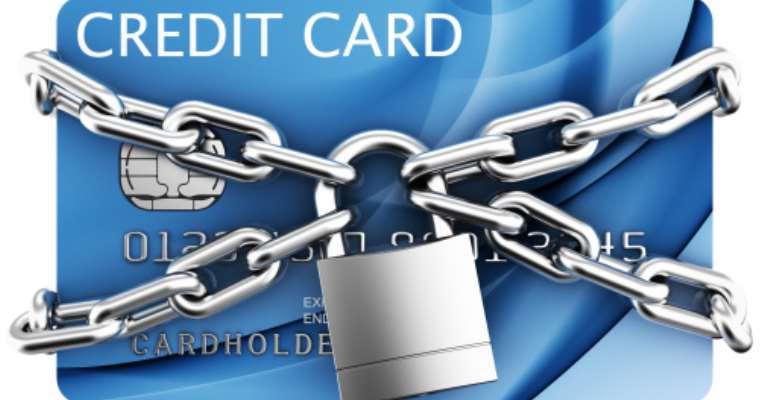 ‘’Even if you make your credit card payments on time, the bank or credit card issuer can raise your interest rate automatically, if you're late on payments elsewhere. Such as on another credit card or on a phone, car, or house payment, or simply because the bank feels you have taken on too much debt’’.

Africans!. Be Warned of Credit Card Culture
I decided to write about this topic because lately banks have started dishing out debit and credit cards to Africans. Unfortunately, Africans from Nigeria to Kenya to Ghana e.t.c seems to be ignorant of the negative side of this new way of spending money.

Before I go on, let me say this piece isn't about US or Americans but about Africans. I have nothing against the US or Americans, but must tell the truth to my African people as the wind of credit culture is now blowing our way. I need do this because the heinous crime of exploitation and slavery happened to us Africans, and not to Americans. Because the slaves were not yet American citizens until they were freed. Hopefully, this truth will set one or two people free no matter what location they may be in the world.

The Credit card bait
African bankers and African population, I want you to listen and listen very attentively. This's a warning!.

You may think credit card is a good thing but it's not. Credit culture is an ancient western capitalist trap to prey on those who do not understand the workings of the evil system of things of this world and the wicked forces of about 147 companies and their capitalist network that control the world's economy.

Do not take credit card offers. Do not use credit cards, unless it's a debit card you've prepaid for. Avoid anything that will lure you into a lifestyle of living on credit. Because once you begin taking credits there's no going back as you can hardly do without it. This happens because you'll see it as a habit and you'll get used to living on credit for things you'll normally afford, if you didn't begin the life of credit. This lifestyle leads into buying things you don't even really need because with credit card the process of payment is made fun and easy and it makes you not feel the pain of payment. Credit card removes the feeling of pain tied with cash payment. It literally makes you constantly tell yourself ''after all I have lines of credit''. Eventually, over the years, you'll take credits beyond your income and you wouldn't be able to pay all your bills. This will make you become a slave working from pay cheque to pay cheque just to pay off your stockpile of debts. This's why the US economy is in a mess now because the US masses couldn't pay their debts. That's ultimately why the 2008 global economic depression happened, and that's why Americans are poor today.

Are you aware a good number of Americans can't afford to buy an iPhone without borrowing money from the bank?.

Are you aware 90% of Americans can't afford to buy a car and pay for it immediately?.

Be warned!.
The link between credit card and slavery
Slavery happened for over 400 years both in Africa and in America, and for all this years African slaves in America had to eat. They also had to buy soap, cocking oil, clothes, cocking pots, all groceries. As human beings they had the same need like every other living person. Therefore, they must buy groceries and whatever they needed at a store. But, there were no stores then as we know it today. The only stores available to them were the ones within the plantation premises.

In order to keep the slaves within the plantation premises and farmland where they worked, the slave owners/masters also doubled as merchants who sell daily commodities, including groceries to the slave population. Each of the slave owners owned a store within the plantation premises. This was the only place slaves could purchase their daily need. I mean, each of the cotton and tobacco plantations spread in Southern US states around Mississippi, New Orleans, Louisiana, Alabama e.t.c also had stores within the premises where slaves had to purchase their groceries. While the slaves worked they could not buy foods, groceries, or any other commodity elsewhere, unless from the store within the masters plantation. This in itself was a method of keeping the slaves within range and not have them go long distance in search of food since there were frequent cases of slaves running away at the slightest opportunity or committing suicide instead of living a life of suffering.

So, basically slaves will go to the masters store within the plantation (merchant stores) to purchase whatever commodity they needed. After purchase completed, the sales person at the store will record the transaction but the slaves will normally not pay immediately. They will pay at the end of the harvest season when they (slaves) get paid.This was the birth of credit in America. But, I must add here the slaves were never being paid initially. This arrangement of paying them came earlier after agitations for freedom and frequent absconding, and suicide by slaves.

Artificial credit card debt scheme
One bad thing that happened though was that even as they (slaves) began receiving salaries but the wages was extremely low. I've heard of slaves getting paid 1cent or thereabout for a week job!. Making matters worse was the merchants would deceive the slaves by manipulating their credit records for the past farming season. The store keepers will manipulate the record such that they (slaves) still owed some money to the store, even when they owed nothing. This scheme was invented by the plantation owners cum store owners to hook the slaves in debt forever by having them roll over their debt from one farming season to the next. Same way credit debts today could be rolled over from January to February to March to April……. and so on. This’s called debt revolving. Revolvers are bank customers who roll over credit balances from month to month, never paying in full. It’s not a new thing people!.

Unfortunately, this was successful because it gave perpetual grace period for loan repayment but it also made it impossible for the slaves to have some savings, or have some sort of economic freedom, or be able to leave the plantation because they were forever indebted to their masters. This's what it means to be a slave!. Remember, there were no deadbeats because no matter how hard they worked they remained debtors by the next farming season. This plot which modern day credit companies call over-charge is still serving it's original purpose till today. This's why I believe US citizens are slaves (both white and black) because the machinery of slavery and exploitation set in motion centuries ago in the plantations of Southern US states is still in operation and serving it's original purpose with no end in sight. Though this was originally designed to keep slaves dependent on their masters forever but the US economy unexpectedly inherited it. It seems to me that's why it's a top secret. And I can comfortably prophesy that within the next 100 years the whole of US wealth and economy will be in the hands of less than 500 companies. US population will get so poor then that the depression of all depression will happen. This looming depression will make the 2008 economic depression a joke.

Credit card enterprise is a legitimate scam, it's an enterprise of the prey and the predator. Eventually, everybody would have to work (just like plantation slaves) in order to keep paying their unending debts. Whether this will mark the end of capitalism I have no idea. But, if the US people will listen to someone like Noam Chomsky this looming economic collapse may be extended but not averted, cause really that's the destiny of capitalism. The destiny of capitalism is that eventually less than 500 companies will own the world's resources. I find it hard to believe Americans themselves remains blind and complacent about this things. Exactly how Rome, United Kingdom, and every other previous world power felt just before their fall.

Honestly, there’s no need of being optimistic about it cause that’s imminent.

Back to topic......
The Rothschilds, Lemans, e.t.c all began business back in the plantations of Southern US cause they were the original owners of the plantation stores. By the end of slavery around 1865 those little plantation stores have become big businesses on it's own right. The stores had turned to mega stores for the public, it have spread across southern US as departmental/chain stores in Mississippi, Louisiana, Georgia, Alabama, New Orleans, Texas, and has become the only place to buy stuffs by the general population (both whites and blacks). This was literally also the birth of departmental stores which are still present all over the US today. These businesses grew larger and larger and went on to form banks and insurance companies.

But things were yet to take a new turn. Between 1865 - 1877 there was a severe economic backlash as a direct result of the freedom of slaves and their withdrawal from farmlands and also a political upheaval as a result of disputed elections results. Plantations began to grow fallow as there was nobody to grow cotton and enough food for the US nation. So, whites began plotting how to lure slaves back to the plantations. On February 26th 1877 a meeting was called between US political parties to discuss the economic crises. The meeting held in Washington DC, and a congressman known as William Levi, a Jewish was a key architect of it all. At the end of the meeting it was agreed that blacks be returned to the plantations to continue growing cotton and food, else the US economy would inevitably shut down. Former slave owners had to resort to writing very beautiful letters to former slaves, begging them to come back to the plantation for a better pay. Whether some returned to the plantation or not I have no idea but here's a reply to such letters by a former slave named Jourdon Anderson to his former master.

Africa have fed kings and queens in Europe and America for too long. Refuse to be enslaved or colonized ever again!.

Conclusion
Desist from credit cards. It's an instrument of luring people to poverty. It's an instrument that will ultimately lead to worldwide poverty and a one world economy. This one world economy predicted in the book of revelation will not happen because people are happy or living good. Rather, it will happen because everybody in the world would be owing serious (debt) money to less than 500 network of companies. These companies would be very organized and so rich and powerful that they would own every business stake in the world, and they would decide who be the president of every single country in the world. They could also stop you from buying or selling no matter your location in the world, unless you receive a mark 666, a mark of enslavement.