NPP’s Political Suicide Waiting To Happen: The Devil(S) Within! 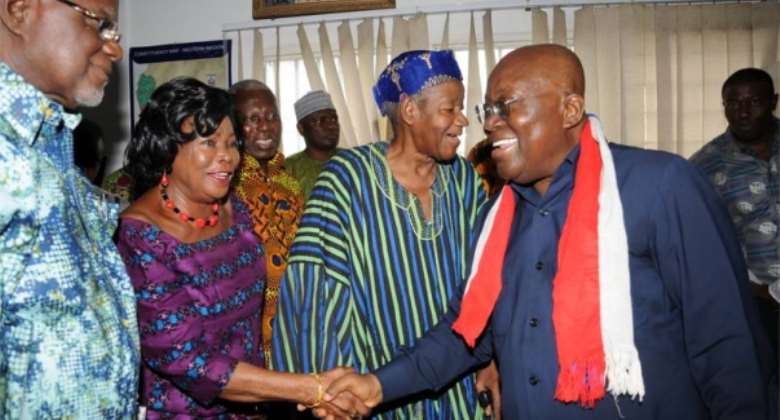 As of now, the NPP appears to be in organizational disarray with sectarian cracks within the façade of its foundational structure. Solid internal unity, cohesion, and a sense of purpose, that help carry a viable political party to electoral victory seem to be slipping away, if not already gone from the party’s grips, come 2016 presidential elections.

Obviously, there may be deniers, as well as some “feel-gooders” in and outside the party who will receive these grim but frank assessments with skepticisms. Yet, the recent chain of events within the party clearly indicates that NPP is in severe trouble as far as presenting any formidable challenge to the ruling NDC government in the upcoming 2016 general elections.

If the Mahama-led administration wins reelections in 2016, it is not because of the government’s competency. Certainly, the most likely storyline will be that the NPP was busy engaging in petty infighting and self-defeatist campaigning rather than taking time to offer any far-reaching policy alternative to help the Dumsor-weary Ghanaians solve the recurring energy crises and other socioeconomic issues facing the country.

The question is: how does the NPP end up in this potentially suicidal electoral mess? Several factors might have conspired to fuel these political imbroglios but among the most likely culprit is the NPP’s outmoded constitutional structure. The party’s constitution needs to undergo reconfiguration based more on inclusivity devoid of any vestiges of exclusivity or entitlement.

If I’m not mistaken, the foundations of the NPP’s current constitution was laid down in the late 1980s and finalized in the early 1990s when I happened to be a foot-soldier (youth organizer) at the Manhyia Constituency in Kumasi when Dr. Kwame Addo Kufuor (ex-Defence Minister) was then the candidate for MP. Since then many things have changed. Ghana has witnessed seismic shifts in demographics as the population keeps growing exponentially. This means well-organized and future-oriented political parties adapt to the changing times.

As far as many of us know, the party has not seen any major amendment made to its constitution that reflects the realities of the ever-changing times—especially given that many Ghanaians are becoming politically literate unlike in the early 1990s when the social media/Internet were not omnipresent in Ghanaian politics. We live in an information age now, where production and consumption of news media occur in nanoseconds. This is why any serious observer or the various media outlets can access all the parties’ constitutions or operations and dissect their entrails for all to see.

Anyone familiar with NPP’s current constitution will realize that the Article 3, Section 5 clearly spells out who is a “true member” or just a “card-carrying” member of the party. The article in question states: “There shall be three categories of membership: Founding Members, Patrons, and Members.” Why is this particular emphasis of party membership categories necessary in a modern democratic party striving to cast its net wide enough to attract as many members as possible into its camp to win general elections? The preceding three class of members as enshrined in the party’s constitution assumes that unless one is either a founding member or a patron, then merely “card-carrying membership” does not mean much as far as the party is concerned.

Looking dispassionately at the unfolding saga involving Messrs. Paul Afoko and Kwabena Agyapong, the NPP’s national chairman and general secretary respectively, it is clear the two officials’ self-serving behaviors so far have constitutional underpinnings laid down by the party itself that is coming back to bite its fingers off. Keep in mind the two embattled NPP executives sought the party’s mandates to hold their respective current office and the party members elected them for a period of time. Although from all indications NPP is in bad shape at this crucial point under the two infamous leaders, yet they legitimately but selfishly argue that they have constitutional obligations to finish their respective terms of office as stipulated by the party. Sure, Messrs Afoko and Agyapong have a point here: Constitutional imperatives must but be allowed to run its course; but, at what cost? In many civilized human settings there comes a time when morality and “good names” become far superior to power and riches leading decent people to give up power or shallow fame in a dignified manner.

In other words, at what point do selfless and savvy politicians choose true love of liberal democracy, integrity, moral compunction, and a sense of human dignity over sheer pettiness, bloated egos, power-drunkenness, vanities, or empty deifications? All legal abstractions aside, given the prior bellicose contact and murky circumstances surrounding the gruesome death of the late Alhaji Adams Mahama, ex-Chair of the NPP in the Upper East Region, any right-thinking observer will likely draw a strong circumstantial case casting long shadows on Messrs Paul Afoko and Kwabena Agyapong.

In fact, we all make sense of our world through comparisons and associations. If this sickening acid-pouring incident in the Upper East Region had happened in the United States or Britain, the national chairperson or its secretary would have resigned or stepped aside long time ago in the supreme interest of the party, given that the two officials’ names keep popping up. But it looks like that is not the routes these two shameless and power-consumed gentlemen—Afoko & Agyapong—are considering at this pivotal period in the NPP’s political trajectory.

After all these castes of the so-called “Founding members or Patrons” which more likely Messrs. Afoko and Agyapong are part of, regard themselves as “untouchables” in the party. The NPP’s constitution claims they are “Those persons who took part in bringing the Party into being and paid the prescribed fee” or the Patrons are “Members who undertake to contribute to the national fund of the Party for the support of the Party’s organization such extra levies as the Party may impose from time to time” (see: Article 3, Section 5, NPP Constitution). As a result, many of these “owners” don’t care about the feelings and the interest of the party’s grassroots. That is why these two guys will stay put even in the face of NPP’s potentially implosion in 2016.

Simply put, if the NPP leaders want Ghanaians to take them more seriously, they must start acting as trendsetters as well as forward-looking party willing to reevaluate some parts of their constitution to see if some contemporary changes need to be applied. Currently, some sections of the party’s constitution make some officials have a sense of entitlement and ownership of the party. All card-carrying members must be made to feel equal within the party. Modern political parties are not operated based on “founding membership” concept. More so, as soon as a party chooses its presidential candidate, he or she must be allowed to call the shots of the party till the general elections are over. The other party executives only form the backline behind the flag-bearer.

This is why the Party Elders must united and put pressure on inward-looking Paul Afoko and Kwabena Agyapong to temporarily step aside till the legal process in court determines the real culprits of Mr. Adam Mahama’s barbaric murder. Remember temporarily stepping aside is not an acknowledgement of culpability or guilt of any crime but for the party’s healing process. For now, whether all the party members agree or disagree with Nana Akufo Addo is irrelevant. The smart thing to do is to present a strong united front behind the party’s current leader and contest every vote out there instead of allowing the two superego party executives—Afoko and Agyapong—keep jeopardizing the NPP’s chances next year.

Bernard Asubonteng is based in the United States.He teaches political science and media influences on American culture at the university level. He can be reached at: [email protected]