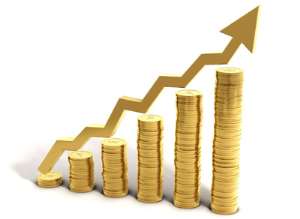 FINANCIAL INSTITUTIONS
The financial services industry is one of the consistent success stories of Ghana, attracting talent and investment both locally and internationally and posing robust growth year after year. Total assets of the banking industry grew on an annual basis by 46.2% to GHC 7,807 million as of January, 2014 compared with 38.1% growth for the same in 2013. As of January, 2014, net loans and advances had reached GHC 3,868.7 million recording an annual growth of 59.2% compared with growth of 37.6% in 2013.

A CALL
The Chief Executive of Progeny Ventures, Dr Kofi Amoah, has called on Parliament and the Bank of Ghana to enact laws that limit commercial banks' investment in treasury bills. That, he said, would help free up funds to support a fast-track private sector growth, create jobs and increase exports. Commercial banks' interest rates currently average between 30 and 33 per cent, while that of microfinance companies range between 70 and 75 per cent per annum. However, bank depositors attract an average spread of between four and eight per cent on their deposits. The minister for Trade and Industries Hon. Ekwow Spio Garbrah has made a similar call to drive down high interest rates.

I vehemently support the call by Dr. Kofi Amoah, Hon. Ekwow Spio Garbrah and the many experts calling for interest rate decline. Ghana has about twenty-eight universal banks; some are foreign owned others locally owned. It is no secret that the foreign banks rub shoulders against local banks because of their capital and assets. Recent report by the Central Bank reviewed that, Ecobank is the biggest bank in Ghana in terms of assets and profits.

COST OF CREDIT
Ghana as a sovereign state manages her own monetary and fiscal policy geared toward prudent economic management. Interest-rate targets are a vital tool of monetary policy and are taken into account when dealing with variables like investment , inflation , and unemployment . Monetary authority is an institution that manages a state's currency , money supply , and interest rates and in Ghana's case, the monetary policy committee chaired by Central Bank governor set monetary policies to control money supply, inflation, exchange rate among others. MPC also uses reserve requirement to control money supply in an economy.

The reserve requirement is a central bank regulation employed by most, but not all, of the world's central banks, that sets the minimum fraction of customer deposits and notes that each commercial bank must hold as reserves (rather than lend out). These required reserves are normally in the form of deposits made with a central bank, or cash stored physically in the bank vault . The table below shows interest rates of some selected countries.

The story is different in Ghana. With current policy rate of 25%. There is a corridor of 300 basis points above the policy rate for any transactions between central bank and the commercial banks. So if we want to tighten policy we increase the rates. It means the banks will also increase their lending rates and therefore it's expected to reduce credit.

The big question we must ask managers of our economy is that, are we running an expansionary or contractionary monetary policy and is that in consonance with our fiscal policy?

Expansionary policy is traditionally used to try to combat unemployment in a recession by lowering interest rates in the hope that easy credit will entice businesses into expanding. Contractionary policy is intended to slow inflation in order to avoid the resulting distortions and deterioration of asset values.

AGI REPORT
According to the AGI Business Barometer 1st Quarter 2015, the challenges of businesses in Ghana include but not limited to;

Inadequate power supply
Ghana has an installed power capacity of about 2414 MW but in recent times faced some serious energy deficits which has led to what is popularly called 'Dumsor'. Currently, VRA, GRIDCO and ECG are shedding between 400MW and 600MW making it very difficult for industries and households to meet their energy demands. How can there be economic growth without sufficient energy supply?

Depreciation of the cedi
A snapshot of how the Cedi has performed against the major trading currencies from the beginning of the year. Last year, the Ghanaian Cedi and Zambian Kwacha were the worst performing currencies in the world. Are we going to see that again this year? The cedi has depreciated about 20% against US Dollar from January to May this year.

Access to credit
The Bank of Ghana has served notice of government's intention to borrow GHȻ25.42 billion from the domestic market within the first six months of the year. The amount is twice the GHȻ12.72 billion the government borrowed through the issuance of government's securities in the same period last year. Government's exponential borrowing from the domestic market is the threat of crowding out it poses to SME businesses - which are already facing a credit squeeze and will have to compete with government for investors' money. As of April this year commercial banks held 2.46 billion of government's 91-day bill.

With current policy rate of 25%. There is a corridor of 300 basis points above the policy rate for any transactions between central bank and the commercial banks. So if we want to tighten monetary policy we increase the rates. It means the banks will also increase their lending rates and therefore it's expected to reduce credit.

According to the Bank of Ghana, the banking sector's total deposits, liabilities as at end December,2014 was GHC 32.43 billion while their investment portfolio (bills and securities) increased in year-on-year terms, by 11.2% to reach GHC12.096 billion—more than half of the GHC 22.22 billion the banking sector recorded as loans and advances.

Delayed payments
One of the challenges as reported by the Association for Ghana Industries is the delay in payments by debtors and to a large extent government. There are a lot of arrears that need to be cleared to enable the industries stay in business.

Unfair competition on the on Markets
One of the challenges African businesses in general and Ghanaian industries in particular face is the unfair competition that has characterised trade in this part of the world. How can industries with inadequate power supply, high cost of credit, loose borders, unfair trade terms among others compete effectively with their foreign counterparts?

Again, Banking Act, 2004 states the functions of the Bank of Ghana to be;

2. (1) The Bank of Ghana shall have an overall supervisory and regulatory authority

(a) Promoting an effective banking system;
(b) Dealing with any unlawful or improper practices of banks, and

(c) Considering and proposing reforms of the laws relating to banking business.

Consequently, the central bank should increase the minimum capital for operating a universal bank. This will lead to banks merging to increase their capital and human resource base. Virtually all the banks are offering the same products and services with less specialization in the industry. There are more banks but less capital. A limit in the number of banks will enable efficiency, innovation and increase in assets and profits in the financial industry. An economy of 26 million people with Gross Domestic Product of $38.58 billion in 2014 with 28 universal banks but still the unbanked in Ghana is still high. Prudent economic management must be underpinned by sound fiscal and monetary policy.