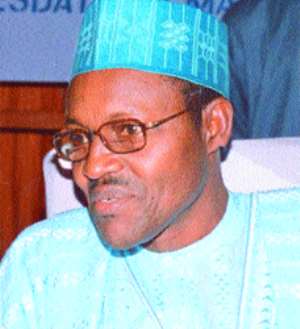 “……… I intend to keep my oath and serve as President to all Nigerians. I belong to everybody and I belong to nobody.”

- President Mohammadu Buhari “He who must come to equity, must do so with clean hands.”

- Judicial aphorism `Nothing is politically right which is morally wrong.'

- Daniel O'Connell. The major platform of the All Progressives Congress (APC) is the fight against corruption. It is the pitch with which the candidacy of General Mohammadu Buhari was sold to Nigerians. The fight against corruption is the fulcrum that fueled the groundswell that swept former President Goodluck Jonathan out of office and the APC rightly used this, among other reasons, as the raison d’être why it must be given the reign of power at the center.

Now Buhari is President. One has just finished reading his inaugural speech. Though, the speech is not that inspiring, it is very encouraging. But what the heck is the value of an inspiring speech that is never followed by any inspiring action that can move forward a country. Reading the inaugural speech of President Buhari, one could not but be concerned about the conflicting message he was trying to pass across in relation to corruption. Corruption, this has to be stressed, is the main reason many millions of Nigerians supported him despite their misgivings about him. Nigerians want an end to this malaise.

The quotation above in which President Buhari promised to “keep” his “oath” and “serve as President to all Nigerians” is an encouraging one. But even more encouraging is the statement “I belong to everybody and I belong to nobody.” One’s take on these statements is that he would not remain a hostage to any political clique for any reason other than being a president of all Nigerians in fair and square manner. It is one’s hope that he would be able to live up to this promise.

However, it is very troubling for President Buhari not to be clear about how he intends to fight the hydra-headed monster of corruption which remains the MAIN REASON his candidacy was supported by millions of Nigeria. No clear outlines. No guidelines. No delineation of what would be acceptable going forward or not. No concept about how to clean the house so that the past would not drag us behind or hold us stagnant. President Buhari had said inter alia:

“A few people have privately voiced fears that on coming back to office I shall go after them. These fears are groundless. There will be no paying off old scores. The past is prologue.”

If it is true that President Buhari actually “belongs to everybody and belongs to nobody,” then he has to come out smoking against what Nigerians consider the most troubling malaise for the country – corruption. He has a duty to the country and Nigerians who put him power. Anyone who has any reason to be afraid should better be afraid if he has stolen our commonwealth. President Buhari should not lose sleep over going after them because that is what they would deserve after looting our resources and making the country a laughing stock. Yes, the past may be a “prologue” as President Buhari calls it, but it should be a prologue that is a klieg light to the path leading to progress and the future that we all dream of.

Some have argued that such an exercise - holding accountable those who have stolen in the past - would make him lose focus and he would not be able to deliver on other promises that could put Nigeria on a better footing moving forward. One disagrees completely. This kind of argument is an apology for the tolerance of corruption in another garb. If no one ever paid any price for stealing from the commonwealth, exercises that has brought Nigeria to precipice, then Buhari would have failed woefully in his presidency. It would have confirmed the fears of cynics like this writer who argued that Buhari did not and still does not have what it takes to turn Nigeria around.

If President Buhari fails to wage sincere war against corruption, not a war against his enemies, but a war against corruption, regardless whose ox is gored, he would have succeeded in putting a final nail on the coffin of Nigeria. This is not about “old scores,” it is about justice catching up with those criminal elements amongst us who have raped this country. It is a battle against the “Ali Baba” type of politicians and civil servants who have destroyed our institutions through the legitimization of corruption. It is about a reset for a country that is seeking to be sane and anxious to take its place in the comity of nations.

Before the inauguration, one had expected that President Buhari would have had a blue print on how he planned to fight corruption. His speech at the inauguration showed that he has not done his homework. One’s own suggestions are as follows:

1. To further build confidence in his administration locally and internationally, he has to declare his assets as soon as possible and make his aides and anyone who would be working in his government to do the same.

2. It is important that because of the conventional belief in the judicial principle of “He who must come to equity, must do so with clean hands,” President Buhari has to clear up the past and make public pronouncements on some of the issues of corruption that have been associated with his name in the past and they include:

a) The 2.8 billion saga that disappeared under his tutelage

d) Abacha's loot controversy e) He should clear up the issue of 25 million naira loan with which he picked APC presidential form and how he planned to pay pack this loan.

After this is done, he has to come up with general and specific guidelines on how to look into some special cases of corruption. One is not sure if the EFCC could be used for this kind of task because of its contamination as well as demonstration of incapacity to fight corruption in high places. If this is deemed the case, a neutral Commission to be headed by a fearless and taintless personality that is fully empowered to pursue the following cases in all ramifications within the confines of the laws of the land should be constituted:

1. How former President Goodluck Jonathan and his Prime Minister, Mrs. Ngozi Okonjo-Iweala managed or mismanaged over $50 billion foreign reserve of the country.

3. Where did former Head of State, General Abdulsalaam Abubakar get the $10 million he donated to a Chicago university in the United States. Is this from his salary or inheritance?

4. What happened to the Billions of Naira allocated to the Energy sector under President Olusegun Obasanjo?

5. What transpired under the Privatization Project of Vice President Abubakar Atiku under the Presidency of Olusegun Obasanjo, especially the sale of NITEL and NEPA?

6. How was the alleged Murtala Nyako heist conducted successfully against the people of Adamawa State to the point that years of salaries of the civil servant disappeared?

7. What informed the rationale of $18million jet purchased with public money by Governor Rotimi Amaechi of Rivers State?

8. The Speakers Dimeji Bankole and Aminu Tambuwal alleged fraudulent loan of 10billion naira on behalf of the National Assembly?

9. The Sanusi Lamido Sanusi donations of billions to some Universities in Nigeria: Where did the billions come from? Is this from his salaries or from his inheritance? Or is this from our commonwealth? If so, does he have statutory powers to spend such money?

10. The Sanusi Lamido Sanusi unaccounted for 640 billion expenditures in the Central Bank of Nigeria needs to be explained to Nigerians.

11. How did Diezani Allison –Madueke run the Petroleum Ministry to the ground?

The list above is not exhaustive. But it cuts across political parties and ethnic nationalities. It affects some of his friends and some who are not his friends. It makes the fight against corruption for President Buhari a very complicated challenge. He has to start from himself as pointed above and then go after the Augean stable to cleanse it. President Buhari cannot investigate every corruption case that has happened in Nigeria. But if he could tackle the above list to its logical conclusions and send those guilty to jail, Nigerians would see the need to recommit to the country.

There is the psychological need for Nigerians to believe that “sinners” would not go “unpunished.” Some people have to be made scapegoats. But if he avoids responsibility to tackle corruption, refuses to make a scapegoat of some or all of these highly placed people if they are found guilty under the garb of not settling “old scores,” then, he would have given a rebirth and a new lease of life to corruption in Nigeria. Any failure to bring to book some of those who have stolen from our commonwealth is a clear invitation to others to thread the same path in the immediate future.

“In the long history of the world, only a few generations have been granted the role of defending freedom in its hour of maximum danger. I do not shrink from this responsibility – I welcome it.”