Nana Akufo-Addo Must Resign First For Others To Follow 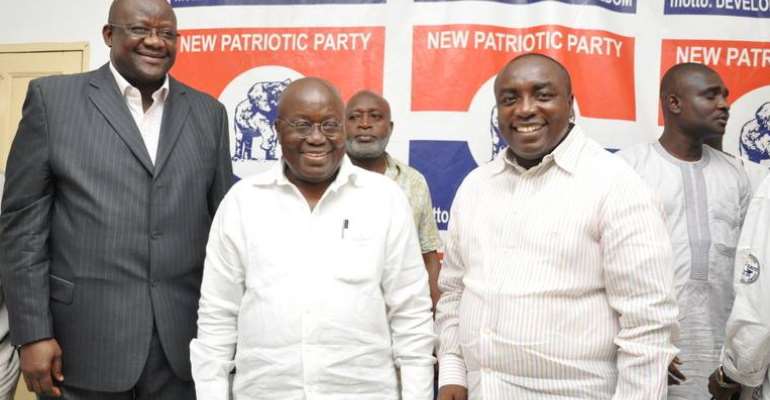 This seeming internal wrangling in the NPP is not new in partisan politics considering the involvement of human beings and contests. It happened under Prof. Albert Adu-Boahen's and John Agyekum Kufuor's tenures as leaders of the NPP. Even in the NDC, all cannot be said to be well. In 1998, some people even approached Kufuor to step down after he was successfully elected as the Flagbearer of the party.

However, due to the exemplary leadership qualities exhibited by Adu Boahen and Kufuor, the politics of violence and insults was not characterised by the NPP. Kufuor, for instance, reached out to his political opponents such as Nana Addo and Kwabena Agyei Agyepong. He did this because he knew the supreme interest of the party far outweighed individual interests.

Kufuor realised elections could only be won by valid votes so every single vote was crucial to him. In short, Kufuor worked with his perceived enemies even in government with some boasting of such portfolios as former Attorney-Generals, and Foreign Affairs.

Fast forward in 2015, National Executive Members are being chased out of their offices with machetes, sticks, and cutlasses. They are being insulted left, right, center. Unnecessary meetings are being held in their absence and the appointments they make are thrown in the bin by the Flagbearer. They make their way to the Upper East Region and thugs prevent them from carrying out their political activities. Afoko and Kwabena have not seen peace since their election as Chairman and Secretary of the NPP respectively. What is worse is the fathom "Agenda 2020" tag put on these two fine gentlemen by some childish minds.

But, in all these unfortunate things, you have a Flagbearer who claims to be the leader of the party doing absolutely nothing about party internal cohesion. He flies to Europe to give political lectures as if Ghanaians in Europe would be voting for the NPP in 2016.

Where is the political leadership from Nana Akufo-Addo, if I may ask? If you can't manage a small entity like the NPP, how would you do so for over 25m Ghanaians? How would you tolerate the NDC, when elected as the president of Ghana?

For me, I expect Nana Addo to make the party's internal cohesion practical and not rhetorical. The usual statement of "Let's work together for victory" etc is not the way forward. Any Flagbearer can complain about fuel price increases, economic hardship etc as being done by Nana Addo. This is not the reason why we elected you. You were elected as the Flagbearer to unite us, strategise for victory, and use that power to improve our lives.

Therefore, the call for the resignation of Afoko and Kwabena by some illiterate minds in the party is meaningless, unless it is linked up with a complete overhaul of the party hierarchy, including the flag-bearer and Minority leader. If there is a failure, all of them have failed us and Nana Addo must take the biggest share of the blame.