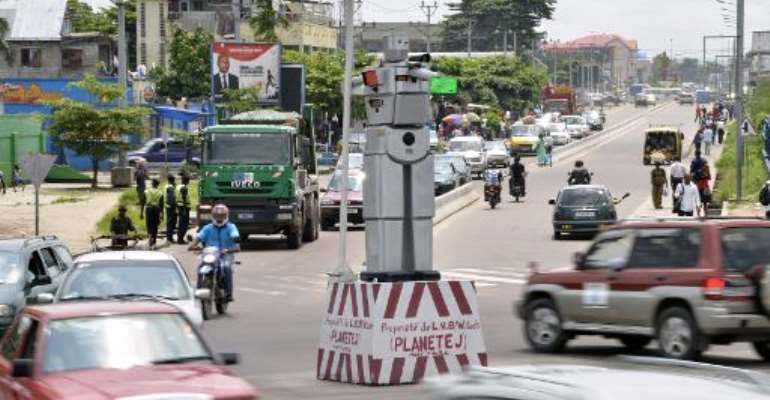 Kinshasa (AFP) - In the teeming capital of DR Congo, where drivers often flout traffic rules, five chunky, arm-waving robots equipped with cameras and lights have been set up to watch over the roads.

The solar-powered aluminium robots are huge, towering over the jammed streets of Kinshasa, as cars and motorcyles jostle for road room, their horns blasting.

Each hand on the odd-looking machines -- built to withstand the year-round hot climate -- is fitted with green and red lights that regulate the flow of traffic in the sprawling city of nine million.

The robots are also equipped with rotating chests and surveillance cameras that record the flow of traffic and send real-time images to the police station.

Although the humanoids look more like giant toys than real policemen, motorists have given them a thumbs up.

"There are certain drivers who don't respect the traffic police. But with the robot it will be different. We should respect the robot," taxi driver Poro Zidane told AFP.

"We're very happy about it," he said, his taxi packed with passengers as drivers around him honked their horns in a desperate bid to cut through the traffic jam.

Of the five robots set up across the capital, two have been regulating traffic since 2013.

On Tuesday, three new and improved robots developed by a Congolese association of women engineers were set up across the city.

Therese Izay, president of Women's Technology, the group behind the robots, believes the invention will help make it far more difficult for motorists in Kinshasa to get away with traffic violations.

"In our city, someone can commit an offence and run away, and say that no one saw him. But now, day or night, we'll be able to see him in real time and he will pay his fine like in all the serious countries of the world," she said.

The new robots "react much more quickly" than the older models, she said.

"The electronic components work much better now than the ones from the first generation," she said, adding that she had submitted a proposal for the authorities to purchase 30 more robots to watch over the country's highways.

Five of the machines have already been sent to Katanga province, in the southeast of the country.

General Celestin Kanyama, chief of Kinshasa's police force, said the new electronic cops were a welcome addition in a city where 2,276 people have died in traffic accidents since 2007.

"These robots will be an important asset for the police," he told AFP.

But Kinshasa governor Andre Kimbuta said that while the machines could regulate traffic, they were no match for real policemen who could chase motorists who jump red lights and raise civic awareness.

"We should congratulate our Congolese engineers, but policemen also need to do their job," he said.