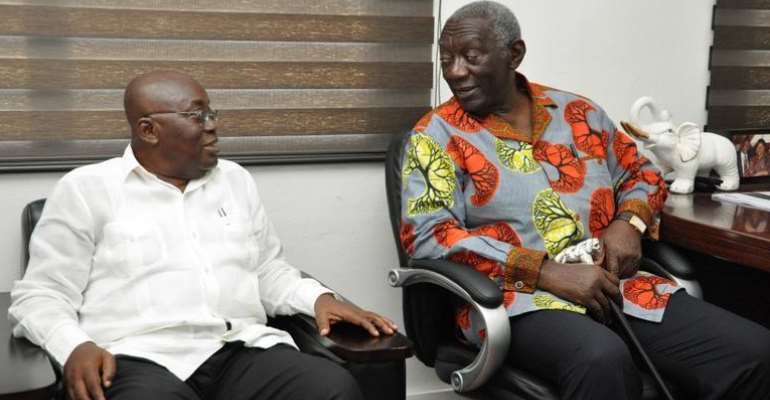 The choice of Nana Addo as the flag bearer of the New Patriotic Party (NPP) for the 2016 election bring into fore issues that question the party's ability to win the presidency of Ghana after two unsuccessful previous attempts.

The purpose of this write up is to discuss the probability of both Nana Addo and NPP's chances of winning election 2016. More often than not critics point to the challenges facing the Mahama Administration as the source for an alternate party to form the next government after the 2016 election.

According to Dr Amoako-Baah, Head of Political Studies Department of the Kwame Nkrumah University of Science and Technology (KNUST), “…the current economic conditions in the country point to this fact which is the NDC would lose if elections were held today…”.

This presumption ignores the real fact on the ground: that Ghanaians do not vote on economic conditions and infrastructural developments. Nii Armah Akomfrah of the Convention People's Party (CPP) explained in his party's performance of the 2012 elections that whilst the campaign itself was issue driven, the votes were not based on issues.For if this was the case the NPP would still be in power. NPP's eight-year rule under President Kuffour (JAK) witnessed a period of relative socio-economic improvement in the lives of the average Ghanaian. Yet at the end of his reign NPP lost power to its arch rival -- National Democratic Congress (NDC).

Others point to NDC's loss of power to NPP in 2000 on similar socio-economic situation as basis for which NPP will come back to power again. What such people fail to realize is that Rawlings as president at the time had before then ruled Ghana for almost 20 years. Ghanaians had become fed up with anything related to him. Thus if the same yardstick holds then the nearest time NPP will be back in power will be 2028 -- that is after another 20 years of NDC's rule.

Another argument for Nana Addo's victory in 2016 is the idea that Ghanaians were sympathetic to Prof. Mills of NDC after he had ran for the presidency on his third attempt and so they will extend similar courtesy to him. This argument is hollow on the premise that Nana Addo does not have the same fate as Prof. Mills as reflected in the Akan proverb:“akokɔ nini kraa ne obrekuo deɛnsɛ”. On Prof. Mills' third attempt, then President Kuffour was not seeking reelection. His term had ended. On the other hand Nana Addo is making a third attempt against an incumbent President Mahama who is seeking reelection.

In Ghana's history no president had been defeated in an election while he is seeking reelection. Rawlings never lost any election till his term was over. JAK beat Prof. Mills in 2000 and 2004. Prof. Mills did not finish his first term as a result of his untimely death in 2012 while still in office. Mahama won the presidency as an interim president. He would not like to be the first president to lose reelection as evidenced in his statement“The transformation agenda cannot be achieved in two years and so any actions we'll start with regards to negotiations with the IMF will go beyond the election cycle…My eye is beyond 2016...” The notion that Ghanaians will accept 2016 as Mahama's 2nd term may be erroneous propaganda that inures only to NDC's benefit; NPP will underrate this notion at its own risk.

Most disturbing isNPP's inability to discern NDC's propaganda from fact. Over the years NDC has erroneously but repeatedly branded NPP as an Akan party with special reference to Asante and Akyem. NDC's propaganda machinery is in full gear when you hear President Mahama say in Kumasi that the hen cannot dance to the satisfaction of the crow. It is a repetition of Rawlings'mantra and NDC's appearance of hate for the region. NDC's intention is to get NPP to behave in the direction of Nana Ampadu's song. 'se otwe awu ampa anka wobehu se wama ne nan so ha wafee nese.” – the death of the deer is proven by the deer raising its leg and showing its teeth. Just at the end of the statement the 'dead' deer lifted its leg and revealed its teeth. That's what NDC has got NPP to do -- if you think you are not Akan Party just prove it.

Surprisingly, NPP has fallen for this bait and is preoccupied to dissociateitself from it. Eric Bawah,one of the prolific writers for NPP wrote in one of his pieces that “Only an unperceptive person will still insist that the New Patriotic Party is an Akan party.Today Mr. Paul Afoko, a northerner, is the National Chairman of the party with yet another northerner in the person of Madam Afiko Afisa Djaba as the NPP National Women's Organizer.” Nana Addo has complemented this assertion by hisinsistence and persistency in nominating and maintaining Dr. Bawumia as his running mate. With Mahama as the President of Ghana and on NDC's ticket for reelection, this is not the right time to bring in any Northern Elite to contest for either the presidency or vice-president position.

There are a number of reasons why Northerners will not abandon the presidency for the vice president position. Just as the Asante's say 'deɛ ɔpɛ adeɛ akɔ Kɔtɔkɔ no ɔyɛ no abrɔ' with the Ewe's 'nyɛbrɔ'; Brong's 'kyɛpim' and Prof. Mills' adze wofie na oye' mantra so does the Grusi talk of 'yiri yalema so yinga yalema.' “Esremfuo nso yɛ persons”. They also want power, fame and the opportunity to shape the future of our country and society.It is really a prestige, an honor to become the president of a country as the highest official and most powerful person in the country, being the chief executive, commander-in-chief of the Ghana Armed Forces, highest diplomatic official, and a revered leader who appoints the highest functionaries in the government.

The first vice president of US, John Adams, famously described the job as “the most insignificant office that ever the invention of man contrived”. In fact some northerners even consider it as an insult to their intelligence for NPP to tell them to vote for Bawumia as vice president instead of President Mahama as reflected in a friend's statement 'Nana kaesɛ yagyimi'.

Among other things one of the reasons why Justice Atuguba's court would not rule for the plaintiff (NPP) in the election petition of 2013 is the painful negative impression that other Ghanaians associate the Northerners with: that they were not smart enough to allow Rawlings to use them to overthrow their own kin from the position of power. It could be seen that most of the military personnel involved in the January 31, 1981 coup were from the north and the coup was against Sisala's own Dr. Hilla Limann who was then the president of Ghana. In this regard Northerners will like to shout loud the Akan proverb “yentia kwasea dua so mprenu” – once bitten twice shy. This is their real chance of getting the opportunity to be in control of affairs in the country.

NDC's propaganda is for a purpose -- to get NPP to loosen its strangle hold on its juicy and enviable core constituency to chase ghost voters elsewhere while NDC steps behind them for the kill. This is what is happening in NPP's stronghold-Ashanti region where the so called Akyem mafia and Kuffour's faction are at each other's throat. This is evidenced in the 2014 primaries where Alan John Kwadwo Kyeremateng of Kuffour's faction wasperceived to have been subjected to the most viral attack by Nana's supporters. Thiswrong impression has succeeded in increasingthe wedge of hostilities among voters in the Ashanti region. While this is going on NDC is gradually but steadily moving into take the middle portion of the warring parties - weakening NPP's hold in the Ashanti region in the process.

Why NPP is falling heads over heels to supposedly clean itself of “Akan Party” syndrome begs the question. A glance through the voting partings of Ghanaians indicate that on two occasions (2000: 80.5% and 2004: 76.97%) when NPP maintained a minimum of 75% of votes from the Ashanti region the party won. Nana Addo lost the presidency when he garnered (2008) 72.53% and (2012) 70.86% of votes from the Ashanti region. Instead of finding a way to increase its votes in the Ashanti region, NPP is seeking votes from the north to replace what it has lost; wrong move. The north does not have the numbers. If the whole thing is to get votes,then NPP's attempt to respond to NDC's propaganda is strategically weak.

Is associating with the north the only way to prove that NPP is not an Akan party? If NPP is responding to NDC's propaganda, why is Nana not looking at the Nkranfuo? They are not Akans. They have the numbers. NDC has never ruled with any of them. After all NDC has proven through the choice of Kwesi Amissah-Arthur as vice presidential candidate that the individual does not have to be popular. His choice was for political expediency, not propaganda. NPP can explore other areas for votes to win election 2016other than concentrating on the north at this wrong time.

While NDC has succeeded in weakening NPP's hold in the Ashanti region it is at the same time protecting its “world bank” with iron clad hands. For whatever reason(s), NPP is scared stiff to fight in the Volta region. This should have informed NPP not to lose hold on Ashanti region. No matter NDC's propaganda a member of Kuffour's faction should always be on NPP's ticket to win an election. On four occasions 1979 (Paa Willie), 1992 (Prof. Adu Boahene), 2008 and 2012 (Nana Addo) Akyems contested for the presidency and lost. On the other hand when Asante ran for the same position in 1979 (Victor Owusu) and 1996, 2000 and 2004 (JAK) they won two. Why cannot NPP put the two on the same ticket and see the effect of such a combination? This Akyem mafia and Kuffour's faction nonsense is killing the party. It cost the Popular Front Party (PFP) the 1979 elections and it is not helping in 2016 either.

Has someone looked at Brong Ahafo? Until JAK left the scene, the Brong's had always been with NPP. Right now NPP does not have personnel like Prof. Busia, JH Mensah and others whom the Brong votes revolved around to get them to vote NPP. NDC took advantage of this 'vacuum' and brought in the loquacious and ubiquitous Asiedu Nketia and Barfour Gyan to secure them their votes.Asiedu Nketia has 'tapped all the palm trees' in Brong Ahafo to the detriment of NPP. In 2012 Nana Addo lost the Brong votesto NDC because NPP did not pay attention to the emerging problem. This is the type of strategic planning NPP should be doing instead of spending resources to respond to NDC's cheap propaganda. NPP has two years from now till the 2016 election to critically develop a model that will bring them the votes in Greater Accra and the Western regions.

One particular problem that needs NPP's attention is the issue of rejected votes. During the first round of presidential elections in 2008, a total of 205,438 votes out of 8,671,272 ballots cast were rejected. Nana Addo then needed only some 40,000 votes to become the president of Ghana. At the 2014 primaries to elect a presidential candidate for the New Patriotic Party (NPP), 1,277ballot papers were rejected. This compelled one Stephen Atta Owusu to lament that it is very frustrating to know that those who took part in the election were made up of a selected few who are very experienced, knowledgeable, educated and yet could make such mistakes in the voting. NPP can tackle this issue by training its own personnel to embark on massive house to house education and campaign.