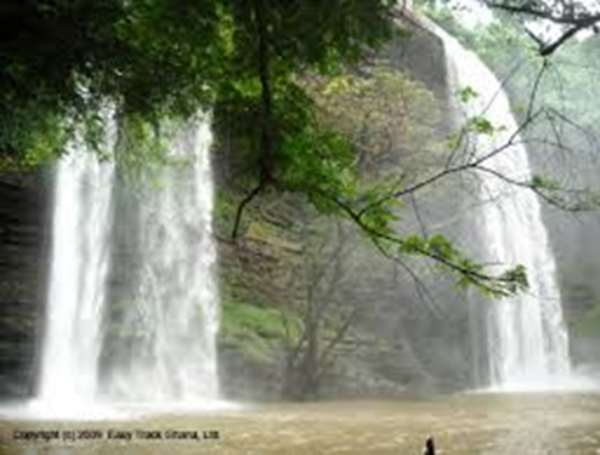 The Tsenku Waterfalls is located in the Dodowa Forest. This beautiful waterfalls drop from a height of about 250 feet, running on stratified rocks into a cool, clean and clear pool with a large tilapia population.

The Tsenku stream is joined by two other streams "Sanyade" and "Popotsi" before meandering into the sea.This falls which we have visited is not a big thing, and there are no large tilapia fish in the plunge pool - only some little fishes.

What is impressive about this falls; also called Wuruduwurudu Falls are the huge, exposed rocks within the valley of the small Po stream.

Then we saw a beautiful rock wall with a little cave under. This rock wall displays vividly the principle of cyncline/anticline folds that indicative of the massive forces that twisted the rocks during their formative years.

Another interesting plus is the Trekking Route from Obosomase to Dodowa, along ancient trade paths.

Nature presents us with a tremendous variety of waterfall in Ghana and in Dodowa a town located in the Greater Accra Region, the district capital of ShaiOsu-Doku District. The city is 39km from the capital city of Accra is Tsenku Waterfall, the only waterfall in the Region.

The enchanted Dodowa forest is the battle-field of the Kantamanso war which ended in 1826. The defeat of the Great Ashanti domination of the then Gold Coast.

The giant Boabab tree at the edge of Dodowa is where the ceremony was held to mark the end of conflict. After about 45 minute, hike in the forest, you will come to this beautiful Tsenku Waterfall we are talking about which drops from a height of about 250 feet, running on a stratified rocks into a cool, clean and clear pool with a large tilapia population.

It is a tourist attraction where people come to visit during holidays especially the Republic Day, July 1st and the annual Ngmayem festival celebrated by the people of Dodowa and its environs. It is estimated that about five hundred people combined of tourist and non-tourist visited the waterfall during that particular period.

THE CHALLENGES FOR TSENKU WATERFALLS
Little is known about the Tsenku Waterfall due to the lack of proper maintenance of the sites and the road network to the place.

We therefore challenged the ShaiOsu-Doku District Assembly in a matter of urgency to take full management control from individual peoples who are claiming the ownership of the waterfall and making huge amount of Ghana cedis whenever there is an occasions in the town and people visits there. We all know that every natural resource, found in Ghana belongs to the state and no individuals can claim ownership of that resources.

The District Assembly can develop the sites to it befitting attraction like the Boti Waterfall in the Eastern Region since the Tsenku Waterfall is the only waterfall in Accra and can save people from travelling long journey.

Developing the sites can generate fund for the assembly from people who visits there and create jobs for the youth in Dodowa.

HEALTH BENEFIT
Now we have had skeptics and gung ho pro-capitalist confront us about what waterfalls are good for.

Unfortunately for nature, the benefit ( especially health-related ) are not immediately apparent and they often do not outweigh the potential financial windfall that decision maker often face. Waterfall improved mood result from the fact that waterfall tend to have aesthetic qualities, exercise, good respiration , and optimization of limited time on earth.

TOURISM
Tourism attraction allows the world to see what that particular country or community has to offer for immigrants, visitors and the likes. It put money into local economy or the District. It can also promotes the district and possibly contribute to increasing revenue and investments in the district.

This is not one of the articles looking for responsibility, but a call to responsibly from the ShaiOsu-Doku Assembly and the Ghana Tourist Board.

Let us all fight to preserve what we were given for our children to also enjoy and pass it on to their children. God bless Se state.