Christianity Yet to Save Its First Soul for Elohim’s Kingdom! (Part 3 of 3) 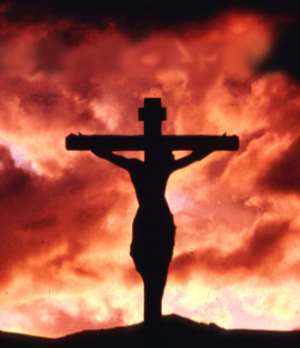 The name CHRIST, which is at the center of Christianity, is derived from the Greek word “CHRISTOS” which is also derived from the root Greek word, crestes, meaning “to smear with grease or oil, or to anoint” according to their industrial-military practices, social habits, general daily lifestyles, religion, mythology, etc.

Sacrilegiously equating CHRISTOS to the holy Ivri title of the Savior—HaMashiach, which means “The Anointed One”—it was, therefore, easy for English translators to come up with the combined name “JESUS CHRIST” which has become so popular and highly revered by the whole Earth, as if it were the true name of Elohim's holiest Son!! It is therefore no wonder that “the Olam Hazeh (whole world) lies under Hasatan”; words in parenthesis are mine—cf. Yochanan Alef (First John) 5:19; Orthodox Jewish Bible (OJB). How sad!!

Since the name JESUS CHRIST has come from Lucifer to mankind, it is only a product of his deception techniques!! Worship of the name JESUS CHRIST is simply worship of Lucifer. Prayers made in the name “JESUS CHRIST” are, contrary to the expectation of CHRISTIANS, not directed to Shamayim, but rather to LUCIFER!! In all this we must remember the “fourth beast” in Daniel's end-time nevu'ah (prophecy), which says of this beast, thus: “and think to change times and law”—cf. Daniel 7:25, OJB and thereby seek to overturn all what Elohim has made and set by His authority. That this beast has long been at this work is simply frightening!!

Now that the whole world has been tricked to worship JESUS CHRIST as if he is the Son of Elohim, Lucifer is happy and beaming with smiles while receiving praise and worship from all inhabitants of the Earth in the name JESUS CHRIST—his dreams of taking worship from Elohim to himself having, thus, come true!!—cf. Second Thessalonians 2:3-9

In his position and power as having one-third of the original number of loyal malakim of Shamayim with him in his fallen state on Earth, Lucifer can do a lot of things for CHRISTIANS that every one of them, in their various denominations of differing beliefs and practices, crave for—which are wealth, health, and fame.

In fact, Lucifer as the de facto ruler of the Earth can and does give these three main cravings of all CHRISTIANS easily to them, in counterfeit miracles and prayers they make in the name “JESUS” which he (Lucifer) readily answers, while making them seem to be goodies handed to CHRISTIANS by and from Elohim!!

Remember that, the core mandate given to YESHUA by Elohim in his coming to Earth as its Savior is to bring salvation from the dominion of LUCIFER and sin to all the inhabitants of the Earth; and this is what all men ought to crave for.

But alas, faith and comfort in the name JESUS CHRIST will not bring salvation to even one single CHRISTIAN as they have been misled to believe that it would—the very obvious reason why NO single CHRISTIAN is delivered from the power of the committing of sin!! Ultimately, all CHRISTIANS would be proven to be, after all, “tares”, and not “wheat”, and therefore only worthy of Hell fire—cf. Mattityahu (Matthew) 13:24-30, 36-43!!

If CHRISTIANS ever go knocking on Sha'arei HaShamayim (Gates of Heaven) shouting out the name JESUS CHRIST in quest for admission, then will the Prince of Shamayim—YESHUA HaMashiach—come out to tell them to leave his gates because they are workers of iniquity—cf. Mattityahu (Matthew) 7:21-27—and that no JESUS CHRIST resides within his gates. As these disappointed CHRISTIAN faithful are turned away from the face of the Prince of Shamayim, they slip effortlessly into the waiting arms of LUCIFER to be escorted into Hell to begin their life sentences throughout Eternity!!

Dear reader, this is just the gist of a huge message that Elohim has placed in my spirit to warn this generation about, and I hope you clearly see its weight and value, and its relevance to your own salvation and desire to enter Sha'arei HaShamayim! For me, like the trumpet blower of Elohim in Yechezkel (Ezekiel) 33:6, I am duty-bound to the holy Kingdom of Heaven to bring this revelation to this generation. Woe is me if I do not blow the trumpet in warning to you!!

Christianity came into being in the fourth century but it was only in the year 1517 CE that one of its monks and high rank leader by name Martin Luther, diagnosed and revealed to the whole world the futility of the religion he led for decades in being able to give salvation to mankind! Luther saw enough evil within Christianity, and must have understood it neither came from Elohim, nor had it any power for the salvation of mankind in its teachings!! Under his lens, Luther counted as many as ninety-five evils within Christianity!!

Many Christians of Luther's day joined him to break away to form what was called The Reformation Movement; an organization they believed had been purged of all evil and, therefore, was safe for them to live by unto salvation! Whether Luther's purging of Christianity was minded by the Creator or not, successful or otherwise, may be judged based on how pure his Movement was, its ephemeral uniqueness, and ever-shifting focus!

Relics of Luther's Reformation Movement are today's Protestant Churches. These Churches comprise every one of the non-original denomination of Christianity—the Roman Catholic Church. And so, all that hydra-headed conglomerate of churches that outwardly seems non-Catholic—visibly disunited in their faiths, doctrines, and practices, to the extent of even abhorring and envying one another—is all what remains of Luther's initial homogeneous Movement.

Today, almost five hundred years after its inception, Luther's Reformation continues to reform into varieties of faiths and practices, with no end to its reforms in sight!! Maybe, Luther should have sought out more than the ninety-five evils he identified in Christianity of his day, to expunge from it, to render his ensuing Movement purer, holier, and beneficial, salvation-wise!

I dare say that, had Elohim been involved in Luther's “Reformation” bid, He would have led him to seek a “Restoration” instead, and then showed him the way back to the saving-faith of the followers of Yeshua HaMashiach of the immediate post-ascension era, abandoning Christianity completely since evil was inextricably fused into it from its inception!

Luther did not know Christianity was never the faith of the first century followers of Yeshua—for they never heard of it to even consider it for salvation! Luther seemed unaware that in the days of the shlichim (sent ones, emissaries, or “apostles”) of Yeshua HaMashiach, nobody preached Christianity. Also, because “Christianity” is not mentioned even once in the entire English Bible, it means that it does not originate from Elohim, neither does it have in it any saving power for sinful mankind!!

The Ivri Holy Scriptures reveals no word translatable as “Christianity”!! This is because, Elohim, in delivering His Word to mankind in Ivrit, did not express in Ivrit one single idea or thought of semblance to what the world has termed Christianity and is living by!

Bible translators, working without Elohim's mandate, forced the word “Christianity” into the minds of their unsuspecting readers by bringing into their Bibles the non-Ivri names JESUS CHRIST, ostensibly meant to belong to the Ivri-born Savior!

Because Christianity has not come from Elohim, it is not His revelation and inspiration for man's salvation! Christianity is a man-made religion, or more appropriately, Lucifer-crafted, and thus, without Elohim's blessings for mankind's salvation!! Christianity cannot save and so, must soon go away!! Just beware!

And in all of this, I dare say that Christianity is yet to save its first soul for the Kingdom of Elohim!! If so, then when? Shalom Aleikhem—May the peace of Elohim be upon you.

Ghana’s economic woes has nothing to do with E-Levy; just st...
18 minutes ago