Nana Akufo-Addo will Lead NPP to the Slaughterhouse in 2016! 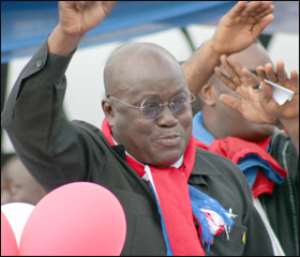 Bizarre as it seems but not surprising, Nana Akufo-Addo, the twice-defeated presidential candidate of the main opposition party (NPP) in Ghana has been able to mesmerize almost all the full line-up of the top-ranking and their die-hard members of the party behind him like the herds of cattle readying for the slaughterhouse. Given the prevailing poor state of Ghana's economy, the NPP has a good chance of dislodging the Mahama-led ruling National Democratic Party (NDC) from power in 2016; but, the arms-twisting and the “Anointed One” practices stacked in favor of Nana Akufo-Addo will definitely spell doom for the party come 2016. Eventually, the NPP's chances of taking back power in 2016 will evaporate into the thin air if the party's apparatchiks do not change course quickly regarding its 2016 flag-bearer. NPP must put a stop to the coronation rituals lurking within the party's higher ranks in an effort to favor Nana Akufo-Addo's insatiable quest to become president at all cost.

Clearly, Nana Akufo-Addo is true warrior and a vanguard of Danquah-Busia tradition in Ghana politics. Aside from his excellent political pedigree in Ghana political history, Nana Addo has championed countless human rights causes, in addition to heading various high positions in government. Thus, in recognition of his sterling political accomplishments and many other contributions to his party and Ghana as a whole, the NPP nominated him two times as the party's presidential candidate, but in each two occasions he was trounced by NDC.

For example, in the 2008 presidential elections with no incumbent contesting, Nana Addo lost to the late John Atta Mills. Again in 2012 general elections, Nana Akufo-Addo was clobbered by the Mahama-led NDC in what appeared to be a close contest, resulting in the former challenging the election results in Ghana's Supreme Court. We all know what the Court's verdict turned out to be. At any rate, here is the puzzle: if Nana Akufo-Addo could not even win in 2008 presidential election where almost all the state apparatus were accessible to the then NPP-led government, what make him and all his backers in the main opposition party so convinced that things will be different this time?

Now, the 2016 presidential election is right around the corner and somehow Nana Addo is almost finished persuading himself as usual, and more importantly, managed to sweet-talk the majority of his party followers that he again is the only person who can win back the elusive presidency for NPP. One wonders if many of these party stalwarts truly understand that one person's messianic ambitions must always be subservient to the party's overall future prospects. The earlier Nana Akufo-Addo and his fawning supporters within NPP come to the realization that in contemporary democratic calculus, one cannot keep crunching the same old tired figures and expect different outcomes.

Down deep in his conscience, Nana Akufo-Addo has to know that he is an unsellable commodity regardless of his excellent contributions to Ghana politics. Probably he must be wondering why with all his knowledge and lifetime political experience Ghanaians had rejected him twice in the polls. Indeed, it happens like that in human life all the time because life as we know it can be cruel and unfair. Plus, not all of us are born to become a president no matter our personal achievements in our country of birth. Nana Addo must come to grips with this reality assuming he doesn't already know this, and try to eschew any self-serving ambition he may harbor and pave the way for a more sellable candidate for the good of NPP. How about throwing his full support behind his running-mate?

Nana Akufo-Addo has taken his party to electoral slaughterhouse two times in a row; yet, a sizable number of NPP members want to reward him the third consecutive time for his defeatist performances at the polls. Justifying their unflinching endorsement for his candidacy, the supporters point to his show of “magnanimity and statesmanship” in accepting the Supreme Court's ruling against NPP vis-à-vis the disputed 2012 presidential election results. Indeed, given African politicians' lamentable track record of resorting to violence to settle electoral issues, the NPP led by Nana Akufo-Addo, exhibited high-mindedness and lived up to democratic ideals for which the Busia-Danquah tradition has championed over the past decades in Ghana political landscape.

In the same vein, though, we can make a case that as plaintiff (Nana Akufo-Addo, et al) there is nothing “statesmanship” about accepting the Supreme Court verdict. This is because if the Ghanaian justice system cannot be trusted to dispense fairness in the interpretation of the law, why did Nana Akufo-Addo agreed to go to court to seek redress in the first place? Besides, as an unapologetic student of representative democracy, the right place for Nana Akufo-Addo to resolve problems pertaining to election is the court of law. This, therefore, should not be the necessary and sufficient condition for the party to deify Nana Akufo-Addo to the point of nominating him the third time for another defeat in 2016 presidential elections. Simply put, Nana Akufo-Addo's campaign messages and political persona do not resonate well with the so-called floating voters in Ghana.

In the final analysis, let me remind all the NPP members the argument Nana Akufo-Addo made at the party's Congress in Sunyani in 1998 in his opposition to giving candidate John Agyekum Kufuor the second chance after losing to Rawlings in 1996. Here was Nana Akufo: “I call on members of the party [NPP] to embrace change in leadership of the party. Such changes are far from harming the fortunes of the party. Change improves the chances of political parties as a new face eventually means new ideas, new methods and new strategies…any candidate elected as the NPP's flag-bearer has already secured 30% of the total valid votes. Failure to garner the remaining 20% plus 1 means the candidate has failed, and therefore must be changed” (ref: Ghana Daily Graphic, October 8, 1998). If John Kufuor back then did not deserve to be nominated for the second consecutive time, why is it okay now for Nana Akufo-Addo to seek the party's nomination the third consecutive time, having led NPP to two painful electoral defeats in 2008 and 2012? Well, it seems like Nana Akufo-Addo is getting ready to take NPP to the electoral slaughterhouse in 2016 all over again. Let the self-denials ignore the warnings!

Bernard Asubonteng was a former Manhyia-Kumasi NPP Youth Organizer in the early 1990s. Currently, he is a blogger and media analyst based in Atlanta, GA. He can be reached at: [email protected] or visit his weblog: www.globalpulpit.com