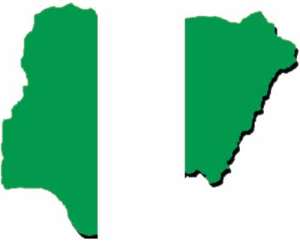 Although a British concoction and contraption which had no original form, Nigeria had a beginning which seemed awesome and promising in the eyes of the world, especially America, some European nations, when Sir Abubakar Tafawa Balewa, then Prime Minister of Nigeria (1963 to 1966) visited USA, etc. after independence of 1960. Dr. Nnamdi Azikiwe was, of course the president, though ceremonial in capacity. These outsiders, everyday citizens in particular, though many are better informed today weren't abreast of the ethnic composition of Nigeria, the selfish and oppressive mentality of the ruling ethnic groups toward those who weren't of same group with them.

It's a wrong and bad foundation laid mostly in the interest of the ruling ethnic groups, namely: Hausa-Fulani, Yoruba and Igbo. Today many are talking about national character and pride as a way to diffusing ethnic recognition, de-emphasizing ethnic politics and tension, etc., but forgot how the beginners laid this self-serving structure, which didn't respect nor consider other ethnic groups misnamed minorities as equals. The tripartite design locked First republic actors above in a tensed power struggle that turned deadly, hence the first coup of 1966 which altered what many calls a great foundation that never was. This trend and coup also helped prepare grounds for the ugly civil war of 1967 to 1970 which claimed about 3 million lives.

Although not too late, it will have been better to encourage national character, spirit and pride from the First republic by respecting and treating all ethnic groups as equals thus served justice to all. Evidently, the beginners were mostly ethnocentric than not. Not only were those in power from Hausa-Fulani, Yoruba and Igbo ardent, even inimical competitors for central power. The country was partitioned and faction into three regions with these ethnic groups in control. Hausa-Fulani was in charge of Northern region; Yoruba, Western region, and Igbo, Eastern region.

They're inconsiderate as those who came after them. As a result they didn't see the necessity for a Southern region which could have accommodated many of the so-called minorities in today's Niger delta or South-South Geopolitical zone. Meaning, as we may all know, they had North, West and East without Southern region, even though the obvious divide was considered North and South as it still is today. Those misnamed minorities were boxed into these three regions as appendage or like slaves who deserved nothing better.

Instead of creating the Southern region they created the Midwestern region, which was the first and only legislatively established area (including states) in 1963. The so-called minority fears and question, which reverberated before and at the Sir Henry Willink Commission (1957, 1958) of Inquiry, and haven't ceased to reverberate were ignored by these groups, which thought and still believe they're more human and ethnic than the others.

Also, the national parties then followed the tripartite arrangement above. Hausa-Fulani controlled the Northern Political Council (NPC), Yoruba controlled the Action Group (AG) and Igbo controlled the National Council of Nigeria and the Cameroons (NCNC), which changed to National Council of Nigeria (NCN). When the Midwest got created, NCNC became its party. Aside of the fact that Dr. Azikiwe, an Igbo, was the nation's president and Sir Balewa, Hausa-Fulani, was the Prime Minister who had power or control than the president. The premiers of these regions were also of the cited ethnic

groups.
Amadu Bello, who was the Sarduana of Sokoto was Northern Premier; Chief Obafemi Awolowo and Michael Okpara were Premiers for Western and Eastern regions respectively. Dennis Osadebey became the Premier of Midwest when it got created; and Richard Akintola took Awolowo's position when the latter was arrested and charged for sedition, which reportedly resulted from his disagreement and anger with the way things were arranged at the center.

By this, I mean the hegemonic tendencies and actions of the Hausa-Fulani (Northern), which Premier Bello reportedly gave added impetus due to his methodology and influence. Hausa-Fulani pre-domination was also said to have been caused by the British colonialists favoring the NPC and people of Hausa extraction.

It's therefore clear that the First republic politicians laid the foundation for ethnic dominance, unsavory competition and bigotry, tension, in addition to grossly oppressing all other groups tagged 'minorities' who have been forced to live alongside these other groups against their wish. Of course, these three groups used their struggles and control to create opportunities for and develop themselves yet, it seems they aren't satisfied with their own grand designs when considering current angst and marginalization complaints amongst or by them. As the report goes, back then the North in particular took undue advantage of the so-called First Nigerian National Development Plan (FNNDP); most federal projects including military establishments went to the north.

Special training and investments were reportedly designed for them. Both unqualified and under-qualified persons were used to fill most federal offices, agencies and parastatals. The reasons, according to reports, the North/Hausa-Fulanis claimed to be responsible for their action was because the West and East have economic and other advantages. The heated, far from national and unprofessional disagreement, competition, bigotry and advantage-taken contributed largely to the first military coup of 1966 mentioned earlier. It's led mostly by Southerners hence brought in Major General Aguyi Ironsi as Military Head of State.

The Northern Premier, Bello, who was a powerful figure believed to be running the country as regional Premier via proxy (Balewa, the Prime Minister), Akintola believed to have been an Allie of Bello and Balewa were killed in said coup. Azikiwe, who was away from the country was the one important actor spared. Different accounts or theories exists as to why he wasn't killed, but obviously he wasn't in the country and this also made some believe he's hinted to leave.

To further trace the dominance of these three ethnic groups, during military rule, which lasted about 33 years (1966 to 1999 despite Alhaji S. Shagari civil tenure), the heads of states, next in command and other key principal officers/civilian positions were largely given to Hausa-Fulani, Yoruba and Igbo ethnic groups. We can now see how the ethnic political struggles of the First republic shaped current struggle between same three ethnic groups at the center, though there now is a new hand in twist with the former, in the person of Goodluck Jonathan who has no option due to his political and leadership deficiency qualified for bankruptcy to dance to their dictates. As it's known, the current president, Jonathan is an Ijaw of the Niger delta listed as one of the minority regions and was written off as an aspect of the country which has no will or force to threaten the unity or economic life of the country despite its exploitation and oppression.

Long story short, Nigeria is a unitary system that is composed of ethnic groups or nationalities. These ethnic nations which include the oppressive three were independent before the colonial masters came. Nigeria is therefore not like America mostly created as a mix-bag of people from all works of life. It's a country forcefully housing distinct and indigenous peoples/nations, thus must be seen and respected as such, even though a transformational trend that may properly melt all groups into one united, progressive and strong nation could be possible, where all groups, individuals are treated with consideration, as equals yet different and justice served. The fact that Nigeria is a multi-ethnic country must not and can't be speculated otherwise.

The more those in power refuse to depart from the ethnocentric and oppressive foundation laid at independence, the deeper groups ignored, marginalized or oppressed will identify with their ethnic groups which must not be wished away, because doing so will amount to destroying their identity.

Nigeria can jettison the erroneous foundation, which imposes curse on the people. It can choose to become a nation-state with balanced regional units or move fast as it seems to divorce. Furthermore, if it must survive, it can and should de-emphasize ethnic politics, bigotry and oppression which translates into conflict, by returning to regional government, which comes with balanced and fiscal federalism and shall leverage the playing field with visible and not theoretical or imagined development, and opportunities that will empower and make everyone and ethnic group feel a sense of belonging and pride as Nigerians.

The above postulation therefore demands a critical look into the history of the negative, oppressive and failing foundation, ethnicity and why no ethnic group should be disrespected and undermined, rather hold high and protected as the basis on which Nigeria exist. Although there is need to emphasize and embrace national, state or regional politics exists, thus the absolute need to de-emphasize ethnic politics and embrace national character and pride, with opportunities created for equal access, competition and success into any office in the country by all groups.

Clamoring against ethnic identity and spirit will mean fighting against nature and the spirit of Nigeria. It will imply fighting national unity and stability, because no reasonable people (ethnic nation) will deny their originality: identity, culture, tradition-heritage and pride-which is their existence.