'Homophobia Is A Choice, Not Homosexuality': Inter-Faith Message 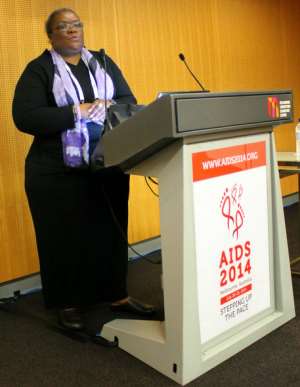 For believers of God, religious faith has a paramount influence on their lives. At XX International AIDS Conference (AIDS 2014) in the inter-faith session the message was loud and clear from different religious leaders: homophobia is a choice, not homosexuality; and religious scriptures teach us to be compassionate, non-judgmental and accept everyone else in totality without prejudice.

'There is a link between HIV stigma and issue of sexuality. In our training we try to help religious leaders understand that sexual orientation does not mean that it is against the will of God. Sexuality is to our bodies what spirituality is to our souls.'

'INERLA is inter-faith: we also work with other African traditional religions. In Africa we have so many countries that have criminalized homosexuality. Message within religious books is that we all have been created in the image of God and nobody has the right to judge or discriminate against any other person' stressed Rev Phumzile.

Despite humungous efforts to combat HIV related stigma and discrimination, it still lurks around us and continues to not only block access to HIV related prevention, treatment, care and support services, but also fuels shame which majorly impacts quality of life and survival. When it comes to key populations such as men who have sex with men (MSM), transgender, people who use drugs (PWUDs) or sex workers, HIV related stigma grows exponentially.

Eliot Albers, Executive Director, International Network of People Who use Drugs (INPUD), said: 'Stigma leads to self-hatred and self-denial. Stigma kills. The flipside of stigma is that you have to look to your own community of PWUDs for comfort, solidarity and kindness.'

Rev Phumzile added: 'Within our religions we have promoted hetero-normativity over centuries. Homophobia is driven with ignorance and prejudice. In Africa, the more we criminalize same sex behaviour, more the problem intensifies because such punitive laws makes people even more vulnerable to HIV as they are afraid to seek help, care and support. INERELA+ asks you to live your own life in fullness without the fear of being discriminated. We equip you with skills to reply to those who stigmatise and discriminate against us using religious scriptures such as Bible. Let us use Bible to respond back as Bible teaches us compassion, non-judgement and accepting people in totality.'

Roy Wadia, Vice-Chair of Asia Pacific Coalition on Male Sexual Health (APCOM) said to Citizen News Service (CNS): 'It is really a critical time in fight against homophobia. That is why APCOM thought that we should partner with other entities such as faith-based organizations and other faith-practitioners around the world to sensitize other faith-leaders about HIV.' A 2013 discussion paper on 'Islam, sexual diversity and access to health services' was also disseminated by APCOM at AIDS 2014.

Rev JP Mokgethi-Health from Sweden said: 'No sacred text can justify persecution and violence against anyone. Homophobia is a choice, not homosexuality.'

He further said that in many ways transsexual and transgender people are better reflections of the image of God. He argued that when the word homosexuality was created in 1830 and Bible was written ages ago, how can reference to homosexuality be in Bible? He stressed that reference to homosexuality in Bible is planted or misinterpreted and we should not be misled. He questioned 'why do we use sacred text to say negative things about sexuality? Sexuality is not something to be feared but celebrated and enjoyed to the glory of God.'

Dede Oetomo, Chair of APCOM, said: 'Like anything in the universe, Islam is also diverse. There are orthodox (absolutist, remedialist), progressive (passivist, reformist) and alternate (humanist, radicalist, arbitrator) people. Work around sexual and reproductive health and rights (SRHR) is possible within Islam by progressive and humanist people because the basic principle is that Islam is a blessing to all in the universe (ar rahmatan lil alamin).'

Dede argued that perhaps interpretation of religious texts is what creates difference in opinion. He said that most traditional interpreters were perhaps men and proponents of heterosexuality that is why when feminist women interpret Islam, interpretation often comes out different.

Rev Phumzile also mentioned about a 'SAVE' Prevention Toolkit launched by Archbishop Desmond Tutu. This toolkit stands apart because it not only talks about 'ABC' approach to HIV prevention (A - abstinence, B - be faithful, and C - condoms). SAVE toolkit talks about: S - safer practices; A - access to treatment; V - voluntary counselling and testing of HIV; and E - empowerment.

Shale Ahmed, Executive Director, Bandhu Social Welfare Society, Bangladesh, said that 'forced, compulsory marriages are affecting the lives of MSM and transgender persons as it perpetuates not only unfaithfulness in relationships but also increases the burden of sexually transmitted infections (STIs) and HIV. There exists huge amount of misconceptions around gender and sexual diversity amongst religious people. Interpretation of religious scriptures on sexuality related issues is often different among religious scholars.' Shale said that Muslim scholars seem to be more accepting and less judgmental of transgender people than MSM. Also some Muslim leaders are often willing to speak about HIV but less willing to speak about homosexuality.

Laxmi Narayan Tripathi, a transgender leader who leads Astitva in Mumbai and Asia Pacific Transgender Network (APTN) said that 'the word 'Hijra' means 'Kinnar' in religious texts so we are more divine than any man because it is in Hindu scriptures. Even in Islam third gender is always mentioned. Right from my childhood I have been with religious Gurus. People may hate or love me, but I have complete faith that my Almighty loves me'

Some very significant trends come up in a study done by Positive Rainbow group in Indonesia. Erman Varella of Positive Rainbow said the study found out that: 'Muslim MSM felt sinful and dirty after sex even before they knew their HIV status. Almost all Muslim MSM did not have sex in the first six months after getting diagnosed with HIV due to fear of God, lack of self-confidence and other reasons. Only few MSM ever approach religious leaders when they are diagnosed positive with HIV. MSM respondents felt that religious leaders view HIV differently from other disease: HIV is viewed as a disease of 'sinners'.'

It is important to note, many MSM respondents said in this survey that 'Even before they got diagnosed positive with HIV, they had felt as if they were committing a sin during sex. So they were bathing many times after sex. Many HIV positive MSM felt that their infection is a 'curse' which makes many of them feel sinful and worthless.' Alarmingly high degrees of deep-seated shame is evident which if left unaddressed end up with serious manifestations such as depression, aggression, self-harm or suicide.

Rev Phumzile's concluding remarks sums up the essence of this inter-faith session so well: 'My faith and spirituality is very important for me in my journey. I am created in the image of God, and God wants me to live a full life and therefore anti-retroviral therapy (ART) is going to work on me. Drugs alone will not help beyond a point. We need to see spirituality as a positive force.'