Confirmed! Asamoah Gyan Was With Castro To Spend Weekend 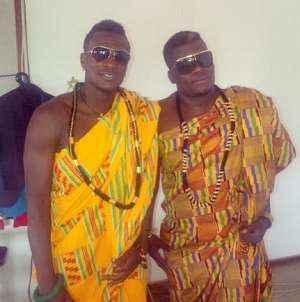 Unconfirmed reports reaching Graphic.com.gh indicates that hiplife artiste,Theophilus Tagoe aka Castro, may has died in a boat accident at Ada.

Sources say he drowned in the Volta Lake while on a weekend getaway with Black Stars striker, Asamoah Gyan.

Gyan was taking his friends a boat cruise in Ada, when the accident occurred Sunday afternoon, according to the reports.

The Black Stars Captain usually rents out a yacht to accommodate close family members and friends whenever he is in town for holidays. However, according to a reports, the said yacht was unavailable this time around, as it had been sent out for repairs.

The group, therefore, resorted to using ski boats.
Castro was said to have taken one of the boats out on a cruise on the Volta Lake alongside his girlfriend, while the others continued with their relaxation at shore.

According to the reports, the lady, who was not wearing a life jacket, suddenly fell into the lake, prompting Castro to try to rescue her.

As Castro attempted to rescue the lady, the ski boat left them in the water, according to the reports.

However, the body of the lady has yet to be recovered.

The reports have not been independently verified.
Castro, who hails from Takoradi, was born in 1982 to Lydia Tagoe, a trader, and Mr Coffie, an accountant, at the Takoradi Harbour. He attended Anglican Primary and J.S.S in Takoradi.

Before he launched his debut album in 2003, he had featured on hip-life group 4x4 hit track, 'sikletele' which officially introduced him into the local music scene.