The Demise of Mr. P.V. Obeng; Symptomatic of a failed state 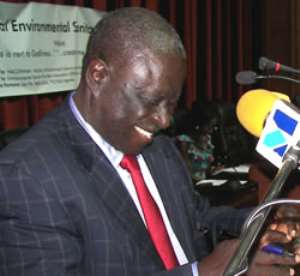 According Sunday, 18th May, 2014 edition of [email protected], the late Mr. P.V. Obeng must have suffered a heart attack while driving to Tema on the Spintex road with his car packed in the middle of the road while people simply passed-by and carried-on with their business, until a 'Good Samaritan' taxi driver got curious, got closer and noticed a distressed person in the packed with its engine still running.

This 'Good Samaritan' taxi driver forced open the car door, took the occupant into his taxi and rushed him to LEKMA general hospital where he was pronounced dead on arrival. Later, the management of the hospital, through one of their senior emergency unit staff nurses, came out with an official account of how Mr. P.V. Obeng was brought to the facility in a taxi by a 'Good Samaritan' taxi driver.

Our health delivery system
The late Mr. P. V. Obeng was someone I had known, personally, since the days of PNDC because I lived in the same neighborhood with him at Tema community-2(Konduah Flats) near 'Agba Maame' restaurant. We had a neighborhood residents' association and Mr. P.V. Obeng was our chairman where he used to organize Christmas parties for us. He also allowed any of us into his well-fortified home when we had something pressing to discuss with him.Indeed,he was a good man who did a lot of good to many people and it is very sad he died with none of those he had assisted in the past was there to help him too.

Now, the fact that nobody was there to help him out since he had helped so many people during his life-time, doesn't mean the state of Ghana should have equally left him to die such a lonely death.Ghana, a well-endowed nation by way of massive natural and human resources, has now been reduced to a begging nation with its once proud people reduced to a bunch of hopeless paupers.

For example, yesterday, the people of Switzerland voted in a referendum and raised the minimum wage to $25/hr, which makes it the highest in the world. I have lived in this country before and the only industries they depend on are banking and chocolate manufacturing, even-though they don't know what a cocoa tree looks like. It is also the cleanest place I have ever been in my travels around the world.

Conversely, Ghana has cocoa,bauxite,diamond,manganese,salt,timber,gold,oil,massive water bodies, vast arable lands, and above all, a highly enterprising human resource.However,our leaders have had to gather at 'Senchi' to engage in a uselessly useless uselessness of a 'talk-shop' before our totally broken economy can be fixed.

The P(NDC) which the late Mr. P.V. Obeng belonged and served with diligence, has been in power for close to 27years out of our nation's post-independence existence but each time these people have had the opportunity to govern, they have ended up messing up whatever they came to meet, through naked corruption. They exited power in the year 2000 after managing the state of affairs of Ghana for close to 2-decades, uninterruptedly, but ended up bequeathing to the good people of Ghana, a shameful legacy of HIPC.

NPP,under the stewardship of John Agyekum Kufour took over the reins of a broken nation,socio-economically,in january,2001,and after 7years,turned the fortunes of our dear nation around, actualized noble social interventionist policy alternatives as NATIONAL AMBULANCE SERVICE,NHIS,NYEP,MMT,LEAP,SCHOOL FEEDING,CAPITATION GRANT,FREE MATERNAL CARE,COCOA SPRAYING, not forgetting gargantuan achievements as TETTEH-QUASHIE-MALLAM-YAMORANSA SUPER-HIGHWAY,BUI DAM AND DISCOVERY OF OIL IN COMMERCIAL QUANTITIES.

Under normal circumstance, the Atta Mills- John Dramani Mahama- Paa Kwesi Amissah-Arthur NDC,after taking over governance of our dear nation, once again in 2008,should have just continued from where NPP left off,but,because this group of people,unfortunately,have never had any love for Ghana but only their personal aggrandizement, simply forgot about the prime responsibilities of a government, which is suppose to focus on welfare of ordinary citizens, and rather started their characteristic "CREATE,LOOT AND SHARE".

In any serious nation, the ambulance service instituted by Kufour should have been improved upon by way of more well-equipped vehicles, quality personnel and a clear-cut emergency help-line which any citizen could easily dial and get professional assistance in time of distress. And here I would love to give a personal testimony;

I used to live in Great Britain, Milton Keynes to be precise. i was on my way to work one early winter morning, on a bicycle. It was snowing and the ground was slippery and in my attempt to negotiate a sharp curve, skidded-off the road and went sprawling on the titan bicycle lane. I got injured, simply reached for my cell-phone, dialed the emergency ambulance number, told them my location, and within a matter of a few minutes, an ambulance came to pick me up to Milton Keynes general hospital.

And when the ambulance arrived, I wasn't just bundled-up into the vehicle and driven to the hospital; i was first asked if i had any pains anywhere in my body, a full-body examination was conducted on me,a lip cut i had suffered was treated and bandaged in the ambulance while i was being conveyed to the hospital.

Now, here i was, a complete foreigner who hadn't even contributed enough to the Britain society by way of enough taxes because i had started working for barely 6months,being given a first-class emergency medical care. But a whole top-ranked government official suffers a distress in his car and it had to take a 'Good Samaritan' taxi driver to single-handedly convey him to hospital.

Indeed, if this case of Mr. P.V. Obeng had happened in any of these civilized nations, the taxi driver would have simply dialed the ambulance emergency number and the man would have been taken care of, professionally, by well-qualified medical personnel before being conveyed to hospital since he possibly wasn't dead at the time he was discovered in his car on the Spintex road.

The Ghanaian media
The media, which is popularly referred to as the 4th estate of the realm and whose core mandate is to provide ordinary citizens with a voice and act as gate-keepers by keeping check on political officialdom, has woefully failed. Anytime there is an serious matter of impropriety involving a top government official and a journalist gets the opportunity to scrutinize such an individual, all you see is the usual back-slapping and uncontrollable laughter, with core topic on the table always getting lost.

The media does this because it is clear greater majority of its practitioners have been compromised so matters concerning massive corruption by political office holders are always kept under wraps while ordinary citizens continue to suffer the ill-effects of such wickedness.

Just a couple of weeks ago, the whole nation's attention was focused on SUBAH,GYEEDA,SADA etc.Now,all these issues are still hanging but the nation's attention, this morning, has been directed to Mr. P.V. Obeng's untimely demise.

When you talk about much pressing issues as Economic Partnership Agreement, Genetically Modified Foods, horrific levels of Maternal Mortality, Severe Energy/Water Crisis and mountains of filth engulfing our nation's capital city because there is no land-fill site to dump our waste, one will never hear our media talking about it. But when someone goes to steal a goat or a chief fights with his subject, you'll see massive amount of airtime being dedicated to talk about it.

Indeed, our dear nation has now become a haven of mindless talkertives with absolutely no sense of direction; and this sad state of affairs is effectively being spear-headed by the media whose duty it is to set positive nationalistic agenda.

Lessons
There is one very important thing I have learned from Mr. P.V. Obeng's untimely demise; as we speak, we all have a clear idea as to events leading to his death because the taxi driver who spotted him on the Spintex road and conveyed him to LEKMA, has spoken. Again, there has been official communication from LEKMA as to who brought Mr. P.V. Obeng to the facility, the state in which he was and what exactly happened thereafter.

On the other hand, we were here when a sitting president Atta Mills died at the seat of government, but as we speak, the mysteriously mysterious mystery which surrounds when, where, why and how he died, still lingers on. JUST THINK ABOUT IT.

Akufo-Addo going to IMF is not victory, it's a day of sadnes...
19 minutes ago