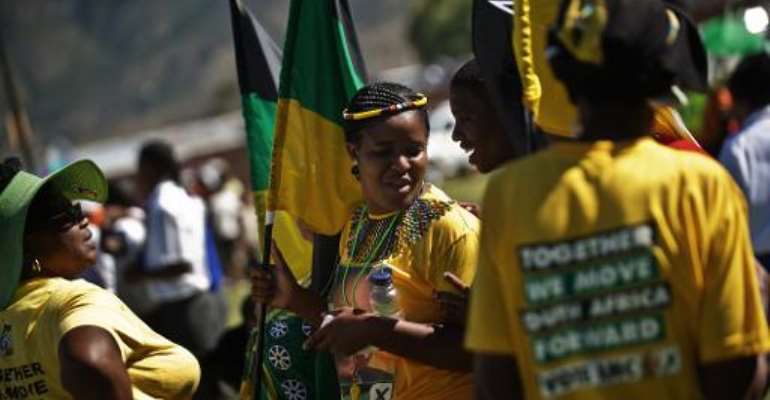 Rampant corruption and a failure to erase apartheid's enduring legacy of abject poverty have sown social and political discontent in what is one of the most unequal nations on earth.

Rocked by scandal and bereft of the iconic Mandela after his death in December, the African National Congress (ANC)is still expected to win the elections easily but could see its majority trimmed.

A group of formerly stalwart ANC supporters led by high-profile former intelligence minister Ronnie Kasrils last week urged voters to signal their disappointment by voting for one of several small opposition parties or spoiling their ballots.

At the heart of that campaign is outrage over the spending of some $22 million (16 million euros) of taxpayers' money on "security upgrades" for President Jacob Zuma's rural homestead at a time when millions of South Africans remain desperately poor.

Kasrils, who describes the campaign as "tough love" for his old party, called the spending "obscene".

But the latest opinion poll, conducted for the Sunday Times at the weekend, suggests the scandal has had little effect on ordinary ANC voters.

It predicts the party will actually increase its tally from 64.9 percent of the vote in the last elections in 2009 to 65.5 percent, although that runs counter to forecasts by many analysts who see the ANC losing at least a few percentage points.

The ANC's continued popularity reflects the fact that life feels incomparably better for many South Africans than it did under the white minority's racist apartheid system.

The government says it has built 3.7 million houses since the advent of democracy 20 years ago, giving millions of people their first modern homes, while some 15 million people receive government social grants.

Yet economic inequality persists and has seen poor South Africans take their anger to the streets, protesting over a lack of basic services like water, sanitation, electricity and housing.

A recent survey showed 46 percent of the population of 50 million living in poverty. Unemployment stands at around 25 percent, according to official statistics.

Racial divisions have proved hard to overcome. White South Africans -- around 10 percent of the population -- remain in the driving seat of the economy -- dominating the high-end job market.

A study released in 2012 showed that blacks hold 21 percent of shares in the top 100 companies listed on the Johannesburg Stock Exchange, Africa's biggest bourse.

Ashwin Desai, a sociologist at the University of Johannesburg says democracy has failed South Africans because the majority are still "mired in poverty in the face of burgeoning wealth on the other side".

"Democracy should mean more than freedom, it needs to translate to the improvement of lives," he said.

But Professor Steven Friedman, head of the Centre for the Study of Democracy at Rhodes University and the University of Johannesburg, told AFP: "Democracy has not failed. South Africa is more prosperous than 20 years ago.

"The majority of people are now free to live and work without restriction, a new black middle class has emerged and people are free to express themselves.

"Yes, corruption is a problem and government does not run as well as it could. But citizens know about corruption now because democracy ensures that a free media and opposition political parties can reveal it."

Transparency International's Corruption Perceptions Index last year ranked South Africa at 72 out of 177 countries -- tied with Brazil, just behind Italy at 69 and better than Greece at 80.

Land ownership is also still largely in white hands. The latest official statistics show that 4.4 million hectares of land have been redistributed since 1994 -- roughly five percent of white-owned land.

Political economist Kwandile Kondlo believes that the gains registered in the past 20 years ring hollow without the land issue being addressed.

"Black people are beginning to feel that they have been hard done by as far as land ownership is concerned," he said. "We can't honestly claim success if we have not made progress in that area."

He promises expropriation of land from whites without compensation and the nationalisation of the mines and banks.

With his red beret and fiery rhetoric, Malema draws thousands to his rallies, and the Sunday Times poll predicts the EFF will take four percent of the vote.

"Such voices were bound to come up given the state's track record," said Kondlo. "We are sitting on a time bomb."

The main opposition party, the Democratic Alliance, a successor to a series of reincarnated white liberal parties has growing black leadership and support and is expected to boost its share of the vote from 16.6 percent in 2009 to 23.1 percent, according to the poll.