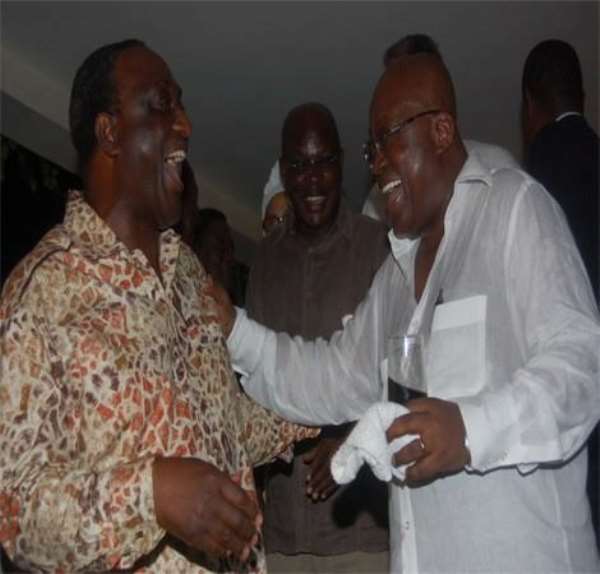 I do not hold an NPP membership card; however, I am attracted by the party's philosophy of equal opportunity, private enterprise, freedom in development, rule of law and social justice. I am excited that the new national executive includes two gentlemen I know very well in the persons of Mr Kwabena Agyepong (my course mate at KNUST) and Mr. Abankwa Yeboah (a fellow Royal from KNUST).

I am exasperated that instead of the NPP capitalising on the abysmal performance and the sometimes sheer incompetence displayed by the Mahama government, irrational power play seems to be the order of the day in the party. If what is happening on Facebook and other social media platforms are anything to by, there is a gathering groundswell of support from young and up and coming Ghanaian professionals that the party can harness in 2016. The current infighting, which has spilled into the public domain, is threatening to throw all this overboard unless urgent action is taken by the party's elders.

I am unabashedly convinced that the NPP will bring more competence and seriousness to attend national issues than the current bunch in government; yet the party's actors cannot see the bigger picture, which ought to be Ghana-focused and nothing else. I writing this article as an observer from afar who is increasingly troubled by what is happening and what that means for Ghana's future.

I fail to see why the NPP would be preoccupied now of all times by who should be its flagbearer – something which is tearing the party apart at the seams. These are not ordinary times in Ghana. The nation is contending with high fiscal and current account deficits. The currency is falling at an accelerating rate and there are murmurings of us going to the IMF for a bailout. The current government's attempt to dealing problems has all but failed and this the time that you are fighting among yourselves? It is like a team, which on being awarded a penalty, spending a lot of time to rather argue about who the captain should be for the following season. Is it not about time the NPP let Ghanaians know its plans for dealing with the problems confronting the nation?

To win the 2016 elections, the NPP requires both discipline and humility. When discipline is mentioned, people often tend to think of party communicators, something for which Sir John has paid a very high price. However, I think the NPP's bane has not been only these but also the so-called 'bigwigs' and 'founding fathers' who need to, for once, hold their tongues and pens!

Yes it is true that a political party thrives on vigorous internal debates but a political party also operates with majority decisions. If your side of the argument does not prevail, there are three courses of action: you go along with and support the majority decision; you keep quiet; or if on a matter of principle, you resign your membership. It is gross usurpation of democracy if you lost the argument but still want your views to prevail.

If the NPP is to present a united front to the electorate, those highly-opinionated bigwigs must learn to trust, respect and use the party's internal grievance channels to resolve differences. These individuals could even be proactive in pursuing some of the changes they are calling for, if such actions do not conflict with what the party has resolved to do. For instance you hear a lot these days that the party has not researched into why it lost two successive elections. If some feel so much about this, why can't they fund an independent research as their contribution rather than using it as some sort of a stick to beat the party in public?

It is high time also that those harbouring flagbearer ambitions act to restrain the boisterous young men who profess to speak on their behalf. They are only widening the cracks between different factions in the party by what they say on radio and what they write on numerous social media platforms. The pity is that, in defending their patrons, these young men are not even arguing about policy directions but rather personalities. This serves to give the impression that extreme personal ambition, rather than Ghana, is the driver behind the clamour to lead the party for Election 2016.

Those who front the party and speak on its behalf must demonstrate extreme humility. You cannot take voters for granted and hope to win elections. The NPP will do well, from now till the elections are held in 2016, to avoid the oft heard claims that Ghanaians would be making a mistake if for one reason or the other they failed to vote for them. They should also avoid being lulled into thinking that Ghanaians are somewhat expectantly waiting for the NPP to come to their rescue. This is too presumptuous and smacks of arrogance. The party should always learn to defer to the 'good judgement' of Ghanaian voters and to appreciate that, in a democracy, they alone have the power to hire and fire.

The bickering should stop now if the NPP wants to win the 2016 elections. There are important businesses to see to, not least among them, electoral reforms. The party cannot cede the required reforms to the Electoral Commission alone. The Supreme Court ruling has done a lot of damage to our electoral laws. As such we now do not know whether poll results forms should be signed by both polling agents and presiding officers or just one of them; whether or not polling results forms should have unique identifiers; and whether over-voting occurs only when it is proved that the ballot box was stuffed.

Being the party that found itself at the wrong end of the irregularities of the 2012 elections, the NPP stands to gain a lot if it leads the effort to have the electoral laws, post-petition, clarified. It should be prepared to go back to the Supreme Court for these clarifications that can then find themselves into amended electoral laws. I wonder, however, whether this is the preoccupation of the party now.

I sincerely wish that the NPP sees the bigger picture. Otherwise it is setting itself up for another disastrous defeat in 2016, taking away the hopes of millions of Ghanaians. Until the NPP demonstrates, by its conduct, that its quest is to improve the lot of Ghanaians, who would entrust it with power? I hope reason prevails soon or the so-called bigwigs would forever have to live with the defeat they are frantically snatching from the jaws of victory!