Is The Black Race The Most Religious Of All Races? 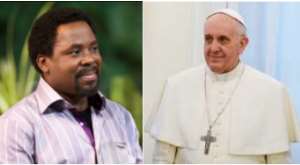 To be described as more catholic than the Pope is not a compliment. It is said that the white man brought Christianity to Africa and they considered it their mission to civilize the black race by converting the heathen to Christianity. Now the "heathen" seem to be more Christian than the one who converted him to the religion.

Are black folks more religious than the other races and why? If you are talking about Christianity, there is evidence to suggest that yes, indeed blacks tend to be more religious. To some lesser extent, the same situation applies to other religions like Islam and the other far Eastern religions and their rapid spread into Africa. As I sat at home this past weekend and listened to or watched the number of church services on our airwaves and on TV, and the overflow of the congregation, a Japanese friend of mine who was visiting couldn't help but to ask "why are Africans so religious?". I think she wanted to be polite as usual because the Japanese are noted for their politeness else she would have put it this way "You (Africans) are the most religious yet the poorest, why?"

I will return to her question later but she was right in asking. In Ghana today, you can hardly walk five blocks without seeing a church. At broad day light on a week day you hear people singing and dancing, beating drums and praying, and you wonder if it is a public holiday but it's not. What happened to work? People go to all night prayer sessions during the week and you expect them to be productive at work the next day. In residential areas, church services usually using loud speakers, drumming and dancing at night disturb the sleep of school kids, their studies, etc. If you question that, they think you are demon possessed and you need deliverance.

Church services in Africa are well attended. Church auditoriums are always filled to capacity with overflowing congregations. Some of the more popular churches, to get a seat in the auditorium, you have to wake up at 4:00 am to arrive at the Church at 5:00 am for a service that will start at 9:00 am. And the service can take the entire day lasting from 8 - 12 hours yet people have patience to sit through the marathon service without complaining. The Crossover watch night service on 31st December are always teeming with crowds of people.

The last time TB Joshua was in Accra, life came to a standstill on the Spintex road, and there was a stampede at his church leading to fatalities. In Europe, North America or Japan, it will be hard to get the numbers you see here for a Church service and they don't last for more than two hours. If you find such numbers majority of them will definitely be black. Lots of the mega churches you see in Europe or North America are black churches.

During uncle Attah's presidency and to a lesser extent the current president too, Christianity and prayers seemed to be the official policy of the state. Instead of careful planning and putting in place policies that can cut down poverty rate, create jobs, improve infrastructure, stabilize the Ghana Cedi, and strengthen the economy, we are simply exhorted to pray so that the economy will be fine. Manna does not fall from heaven anymore, we have to work for it. Actually God expects us to think, plan and implement not resign ourselves to prayer 24/7.

Far from being victims and always playing the victim card, the black race is also a race of fighters. We are fighters and we never give up. It is the race that has produced the likes of Nelson Mandela, Martin Luther King Jnr, Kwame Nkrumah etc. Man's inhumanity towards man has also produced the fighting spirit you see in the black race. That rebellious trait. If you are a fighter, you need a supporter, and we tend to find that in a Supreme Being.

It's natural that when one is in a constant state of struggle for survival against forces that are much more powerful than any you can realistically muster on your own, you seek refuge in a Supreme Being who has an overwhelming power to spiritually help you to overcome the "forces" you are confronted with or so you believe. That Supreme Being is God and that overwhelming power comes from Him.

This Supreme Being is also comforting and He promises you that even if you are not successful in overcoming your earthly struggles, a brand new world of paradise awaits you when you die. Black folks have bought into that more than any other race because of our own peculiar circumstances and the constant struggles we are involved in. Heaven awaits us if we die and our ticket to heaven is being religious and being Christian.

As for black folks being the poorest, well, if you spend 12 hours singing and dancing and listening to your reward is in heaven speeches, how can you compete with someone who uses that 12 hours to work, plan and seek his reward right here on earth?

The writer is a senior socio-political and Economic Analyst based in Tokyo. He welcomes your comments: [email protected]

Carlos Ahenkorah Resigns After 'Roaming' Around With COVID-1...
16 minutes ago