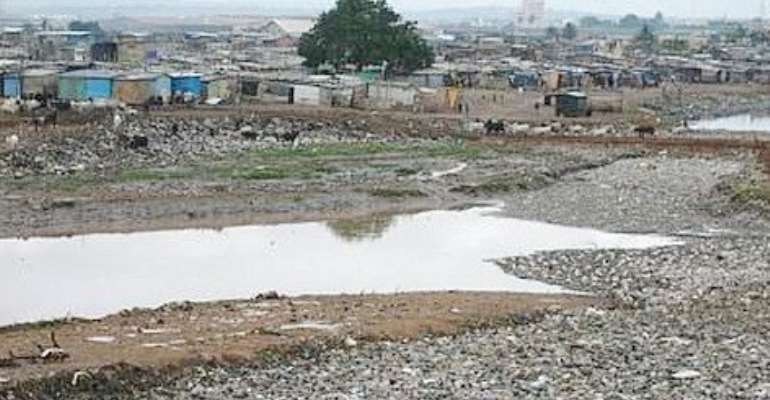 Different people of various backgrounds have lamented over a serious environmental problem that needs attention in Korle Gonno. Indeed, one can infer from someone's face and be able to identify what exactly is the problem before any assistance can be drawn out.

There is no denying the fact that the people of Korle Gonno have been facing a host of perennial problems and that the earlier imperative measures are found to these seemingly insurmountable problems the better.

These roads have terrifically been in a deplorable state for so long that they have become virtually immotorable during the raining season days. These same roads linked to the Tuesday market and the traders have been nagging and begging to the authorities to rectify their problems but all to no avail.For this reason, conveying food-stuffs and other food crops to come and sell at the market have became tricky.Foods crops and other items attract a very paltry prices which encourage consumers to patronized.

Meanwhile, there is shortage of good drinking water in Korle Gonno and nobody seems to be doing anything about it.Most of the people buy pure water sachets and ordinary water from water tankers to ease themselves a bit and to minimized the stress they go through due to the shortage of portable good drinking water , but still complaints are airing due to the exorbitant fees the water tankers charged and the diminutive pure water sachets which have to be purchased copiously before it can suffice household chores.

Furthermore, there is a serious unemployment problem in Korle Gonno . the large number of exuberant young boys and girls do not have jobs to do to make ends meet in Korle Gonno.This has compelled them into fraud browsing business to extort money substantially from other people to do nonsensical things and to celebrate swanky parties.This has affected and resulted as recalcitrant individuals in Korle Gonno.

Consequently, there is a catholic school which depicts Korle Gonno as KORLE GONNO R/C BOYS BASIC SCHOOL.This school is almost located at a site where refuse and waste are dumped including human excreta.

Anytime work is in progress at the waste management center, the entire students and the teachers find it difficult to cope with their studies as the stench emanating from the refuse dump becomes too much to contain.

This bad odour diffused in various classrooms whilst academic teaching is going on is simply disgusting to say the least. This has affected academic performance and prevented the students from coming to school early as possible.

I have a few suggestions for government to consider to rectify the situation.

First, the government as a matter of urgency should embark on massive roads construction works to put the roads linking the Tuesday market into a good shape to make way for more brisk business.

Secondly, there is the need for government and other non-government organisation to come and provide pipe borne water and to repair any pipe tube that has leakages that causes shortage of water and therefore provide jobs for the youth to curtail the night browsing business at internet cafes.