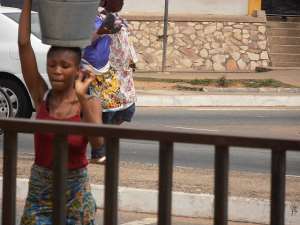 I spent Thursday, the 16th of January 2014 to embark on a long journey to Nsawam Prison, to visit an inmate whose story illustrate the gross miscarriage of justice the majority of Ghanaians live with, in this day and age. The story first got to us as an advocacy group committed to “Defend and Advance the Socio-Eco-Political rights of ECOWAS citizens, locally within Ghana and across West Africa” on Tuesday the 14th of January 2014 by the relative of the victim. The anomalies in the incidence were so difficult to believe that we have to arrange to meet the victim himself in prison to confirm that indeed such person exist and the story was true. We visited the victim as a group and he was indeed serving a sentence of 15 years imprisonment.

What resulted in the young man of 27 years to end up serving 15 years of his life in Nsawam Maximum Prison was an accusation levelled against him by a nine year old girl of “defiling” her. The narrative by the 18 year old brother of the accused person, who is now the bread winner of the family and the one supporting his brother in prison was, his brother was sentenced by a court sitting he was barred from, on the basis of his age. The junior brother holds the belief that only six people were present during all the trials and the pronouncement of the final verdict.

The incident was said to have taken place in Dankuman which is a suburb of Tema New Town, on the 28th of January, 2012. The girl in question was at the time a nine (9) year old, her six (6) year old junior brother, the Accused seven (7) year old junior sister and another girl of thirteen (13) years of age, were watching TV in the accused room. The children were all said to be watching a football match in the accused room. The accused was said to be fast asleep on his bed the same room with a curtain divider separating where the children are seated from the location of the bed.

The nine year old girl after the match was said to be seated in front of their room where she occasionally sit waiting for her mother to return from work. On sighting the mother approaching, the girl run to her mother and told her that she was just raped by the Accuse while they were watching foot ball in the accused room. The girl said she fell asleep while the match was going on to which the Accused pick her up to his secluded section of the room and “defiled” her.

The mother went to report the case to the police and the young man was arrested. Medical report was obtained by the victim's mother on her daughter and this indeed might have confirmed the girl had engaged in sexual activities. The case proceeded to court as expected, with the Accused claiming innocent.

85% individuals accuse of such crime never accept guilt and 20% of such accusation turned out to be hoax in the long run. This therefore means the only place to establish what exactly happened is in the court of law, as the medical report does not include testing the liquid (Semen) sample found on the girl's virginal area, if any. The work of the court of law depends on the professionalism of the police, the judge, medical doctors and the extent to which the evidence are exhausted, if they are available.

The case was adjudicated in the Ashiaman Circuit Court. The court was said to have sat for seven times and on everyone of the sitting, the only ones involve were the police, the accused, the nine year old girl, her mother, the judge and the court clerk. The special nature of the court setting was that it involves a minor, so for all the seven sitting, no witness was introduced to establish what actually happened than the girl who alleged she was raped by the young man.

There was a point in the course of the sitting when the Accused person asked to have the other three children who were present at the time, to give their own account to the court on what exactly happened on the fateful evening but the judge insisted they are juveniles and cannot appear before the court. The plea of the Accused was therefore turned down by the judge and on the seventh trial, the young man was given fifteen years imprisonment.

The twenty seven year old accused person of defiling a girl of nine was at the time of the incidence was a taxi driver. This taxi driver who was renting a room in the same house as the Plaintiff, is said to be living with his younger brother of 15 years and a sister of 7 whom he brought from a village in Aguna Awaduro, to live with him as their parents are all dead. The young taxi driver also had three other siblings back in his village that he supports with his earnings from the taxi driving.

The challenge we have as an Advocacy Group on the right of the Ghanaian is the same to every Ghanaian. We are responsible for every Ghanaian girl child to live free of fear and free of want. We are fully aware that if the state's laws are effective as we are being made to believe, the girl's parents would have had enough to provide TV for their own children to avoid a girl becoming a victim of rape because she visited somebody's room to watch TV. Equally, a responsible law of the state would have cleared all ambiguities that will be creating atmosphere of unsubstantial accusations. Everyone is just a victim in this very case.

In most society, the responsibility of upholding justice is not limited to individuals privately, which was very obvious in this particular case. The state ensures that parents do not leave their children anyhow, just to create an atmosphere of doubtful accusation for which young hard working citizens will be spending their youthful lives in prisons. What has failed in this circumstance is Ghana and not the girl or the young man.

The medical report as a basis for a girl's defilement is not a proof of who defiled the girl. There are several possibilities here. An average girl in Ghana of the age of seven might have been exposed to all sorts of sexual activities due to several factors. The kinds of films our children are exposed to in private and public medium are a serious factor. The economic hardship and the extreme dependence on demands of goods and services, available to the modern man but out of reach of the majority of our population, is pushing the children to explore mot of what they see in the films for financial reasons. The environment where parents are not accountable for what their children experience on hourly basis and the state even worse off in its responsibility to the citizen, are a serious challenge.

So all the above being the case, this particular girl might have been exposed to sexual experiences for the medical report to confirm positive. The concern is, what about if another male in the community defiled the girl at a different point in time and on meeting her mother, she decided to mention this young men's name? What about a case of a woman who inspects her daughter are sexual parts at interval and the girl knowing this, decided to implicate this young man than the person she is infatuated with, but forced to have sex with her? This other man is now at large if that is the case but how was the law able to establish this?

The Accused is now three year old in serving his fifteen year imprisonment at Nsawam. The fifteen year old brother who is now eighteen and happened to be watching the football match with his friends elsewhere at the time of the incidence, is now the taking care of his brother in prison. This eighteen year old has now returned the seven year sister back to the village, where she is serving as a farm hand to sustain herself. Her schooling life being provided by the sentenced Accused brother has now to wait for fifteen years, when she will be 22 years old and her brother out of prison.

The only brother of the Accused said he was never allowed to be at the venue of the seven sittings on the case, on the grounds that he is a minor but this same person is the only one visiting to sustain the brother in prison. This young man is said to be doing menial jobs from which he sustain himself and his imprisoned brother.

The boy has already served three (3) years of the fifteen years but the reviewed case has not established whether the seven years is going to be deducted from the fifteen years or from the seven years. The reviewed verdict from the appeal court has not reflected in the record of the Accused person. In other words, the file containing the reviewed case is still in the Court premises to be forwarded to the prisons to update their records and this has not yet taken place three months after the case because, there is a charge of GHC1000.00 (One Thousand Cedis) to be paid to the court to transfer the file.

The younger brother is now running helter skater to raise the GHC1, 000.00 to pay the court for the file to get to the prison for the records to be updated.

These are the challenges of the ECOWAS Citizens Right Advocates (ECRA). Our problem is not the GHC1, 000:00 needed to get the updated record of the young man to the prison. It is just strange that the very court of justice's judgement that put a person in prison in the first place, is now struggling to foot the bill of justice in Ghana? The court in Ghana or employees of the court are now asking inmate to pay for transferring the verdict of the court to the records in prison. If the court is demanding GHC1, 000.00 officially or unofficially from a prisoner to get his record updated, then what other official and unofficial costs were not met by the law that resulted in this type of justice? Is this the justice that is going to develop Ghana? Who is also waiting to be the next victim of this kind of justice? How many people are victims already? Must you wait to be the next?