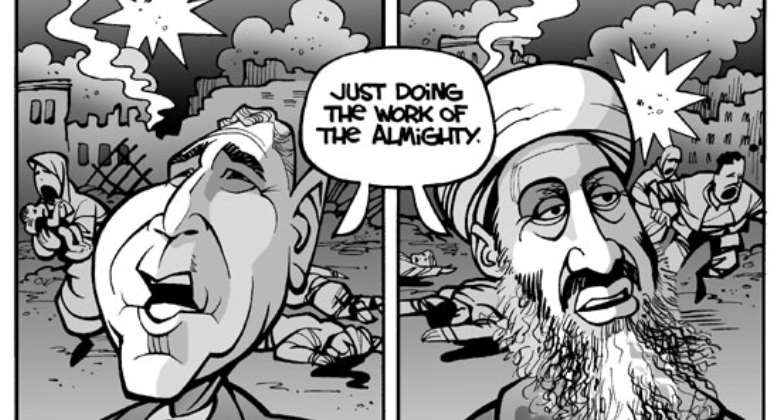 Fundamentalism is a widespread problem. It often manifests in a religious context - making it highly visible - but there are plenty of secular fundamentalists too. If we are to understand fundamentalism we should not view it as a religious problem: It is a psychological one.

What is a fundamentalist? A fundamentalist is usually considered to be a person who adheres strictly to a doctrine, viewpoint or set of principles that are considered original and 'pure'; this doctrine might be theological in nature. For the fundamentalist, many of their beliefs and the behaviours that arise from them will, at least in theory, be derivative of their fundamental doctrine. For the fundamentalist, there is no room to consider views that are at variance with their accepted doctrine and contrary views will usually either be dismissed out-of-hand or resisted with considerable vigour and, often, violence.

In contrast to the fundamentalist, a person who is 'open-minded' may still hold strong views and perhaps even have a strong conscientious position on certain issues. They will usually behave in accordance with those views and their conscience. However, despite this, they will usually also demonstrate a willingness to seriously contemplate an alternative view or course of action before discarding it. Moreover, they are likely to accept suffering, in one form or another, as the outcome of their conscientious position; they are unlikely to use violence to 'defend' it.

Fundamentalism, in a religious guise, is both widespread and problematic.

variety) drives attitudes towards women and foreign policies in countries such as Saudi Arabia, Hindu fundamentalism manifests as a form of religious nationalism in India, and Buddhist fundamentalism is driving the violence against the Rohingya (Muslim) population in Burma.

While religious fundamentalism is recognisable to most people, fundamentalism has many non-religious manifestations as well. These are widespread, even if they often occur in less readily identifiable ways.

Moreover, fundamentalist behaviour is readily observed in individuals as well as in groups. One example of fundamentalist behaviour is the parent or teacher who believes that obedience is an unquestionably desirable trait, that all commands, rules and laws are right beyond question, and that children and students should be admonished to obey all of these unthinkingly. Another example is the wealthy person who believes that money is the measure of all that has value and is quite unable to share any of their wealth.

violence) the child into believing/adopting a particular set of values and beliefs, and behaving in a particular manner. It is the intensity of their fear of being judged 'wrong', and the violence they will suffer if they are so judged, that makes the child hold, with phenomenal tenacity, to the 'approved doctrine' with which they are presented. It is this intense fear of being wrong that marks out the fundamentalist from the person who is open-minded and/or conscientious.

Fundamentalism is a significant social problem, particularly in some contexts. And to fix it, we need to recognise its psychological origin.

Unfortunately, however, this is not easy to do because the terror that holds their value and belief system in place, and drives their behaviour, is deeply hidden within the individual's psyche.

In theory, it is possible to liberate a fundamentalist from their terror, which will open their mind to other possibilities, by listening to them, deeply, while they talk about their childhood experience and feel the feelings - the fear, pain, self-hatred, powerlessness and anger particularly - that they have suppressed since childhood. See 'Why Violence?' http://tinyurl.com/whyviolence and 'Fearless Psychology and Fearful Psychology: Principles and Practice'

In practice, regrettably, few of these individuals are likely to have the courage to feel their own terror and other suppressed feelings. This means that nonviolent strategies to resist the violent behaviours of fundamentalists are important and necessary too.

If you wish to join the worldwide movement to end all violence, in whatever form it manifests, you can sign online 'The People's Charter to Create a Nonviolent World'

http://thepeoplesnonviolencecharter.wordpress.com
Biodata: Robert J. Burrowes has a lifetime commitment to understanding and ending human violence. He has done extensive research since 1966 in an effort to understand why human beings are violent and has been a nonviolent activist since 1981. He is the author of 'Why Violence?'

http://tinyurl.com/whyviolence His email address is [email protected] and his website is at http://robertjburrowes.wordpress.com

More Feature Article
ModernGhana Links
How the ancient Bono people fought disease outbreaks
"Bite" And I Will "Sting": Open Letter To Johnnie Beresford Hughes
If I were Martin Amidu (Hon)……
My candid opinion on the arrest of broadcaster Captain Smart ofOnua Radio/TV Station
Who is the Most Defeated Presidential Candidate in your Country, Continent, and the World?
Leave The Problems Behind Ghanaians, Take A Positive Step Into The Year 2022
Illegal Approval Of An Illegally Rejected Budget; Another Nullity Or Legality?
Free Speech Is Not Tantamount To Irresponsible And Foul Language
True values, beliefs and integrity matter little in a career political party-based system of democracy in Ghana
TOP STORIES