Nunoo Mensah Is Right—K B Asante 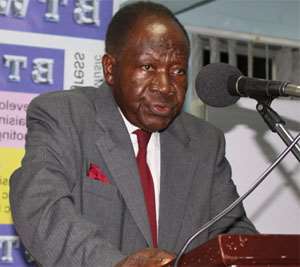 He believes the Retired army General has genuine concerns about the lack of patriotism on the part of public workers.

K. B. Asante, who spoke on his programme 'Time with K. B. Asante' on the XYZ breakfast show on Monday said the attitude of public workers leave much to be desired.

Nunoo Mensah recently lashed out at organised labour for their unending strikes and asked them to “get out of the country if the kitchen is too hot” for them.

He wondered why public sector workers are not sacrificing for the interest of the country, but always threatening strikes.

There's been an avalanche of flak against him from people like Chief Policy Analyst at the Ghana Institute of Public Policy Options, Dr. Charles Wereko-Brobbey as well as various groups including the main opposition New Patriotic Party which as described the comments as “reckless” and branded the retired army Officer as an “incompetent” person.

Labour groups including the Ghana Medical Association (GMA) as well as the Civil and Local Government Staff Association of Ghana (CLOGSAG), have also joined the condemnation bandwagon.

K. B. Asante however differs in his analysis of Nunoo Mensah's comments.

“Yes I agree with what he said but I think we should go into the matter in depth and find out why they are on strike…yes he is right in his comment and we should address the problem”, he noted.

He said public sector workers are part of the problem and must share the blame.

“Very often we try to blame a Government but we, public officers, are part of the problem”, he argued.