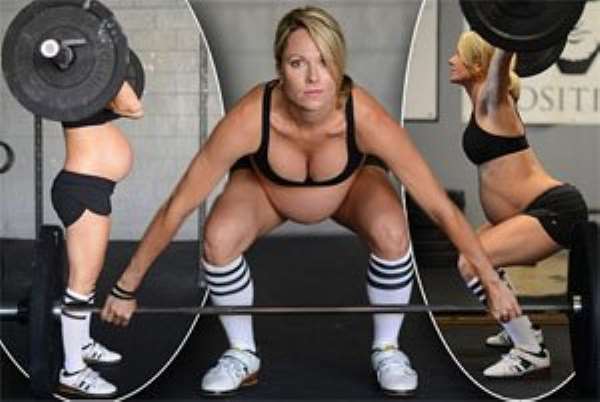 For most women, being eight and a half months pregnant means taking it easy, sitting back and hoping that Junior will put in an appearance before too long.

Not Lea-Anne Ellison. The 35-year-old bodybuilder from Los Angeles has sparked an online storm after posting photos of herself lifting heavy weights on Facebook – with her due date just two weeks away.

Elllison's photo has already had more than 16,000 comments posted beneath it since it first appeared on 15 September – and the feedback has been very mixed.

While some appeared to support her decision, including several who claimed to be doctors, others were horrified.

'This is actually sickening,' wrote Amanda Cinq-Mars. 'I hope pregnant [women] around the world do not do this kind of cr**.

'I am a crossfit enthusiast but I DO NOT recommend this at all. Doctors always strongly suggest to not lift heavy because you can sever your placenta and cause major damage an early labour and miscarriage …. 'Posting this picture goes people the wrong message that this is OKAY when it's not!!!!'

Another, Josh Giannapolous, wrote: 'Cross fit? This goes way beyond a way of life, and right into an obsession.

'She is very selfish for endangering a life for her own personal gains and achievements. This is not a proud picture to post.

'That amount of weight lifted above the head is extremely dangerous while pregnant. Cross fit is a hobby, not a necessity to life. It's becoming unconscious to the dangers of reality.'

Others sprang to her defence, with Katy McNiff Nicholas writing: 'You go girl! Looking great!!! Much better than a lot of obese pregnant ladies with high blood pressure and diabetes who get short of breath walking up a flight of steps.'

Ellison also took to Facebook herself, commenting:  ' I want to thank everyone for their kind and supportive responses!

'Haters will hate and it's ok. My life is not their life thank goodness! Lol! Again, thank you! It means so much to feel this much love from a community I adore.'

Her comments echo previous remarks made on her profile page on the website Bodybuilders.com.

On it, Ellison, who also has a son aged eight and a daughter aged 12, says:  ' I have always loved athletics and fitness.