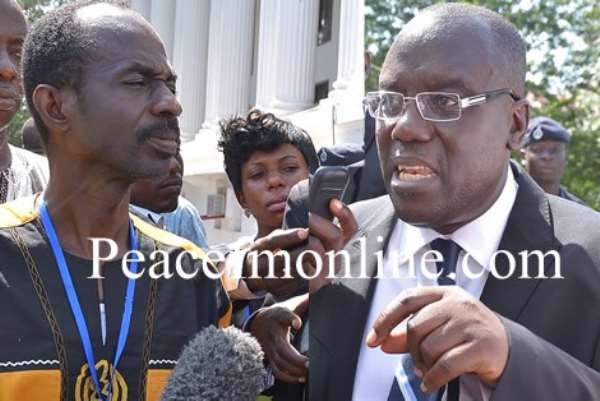 In fact, if the NPP were to properly learn the lessons of their electoral defeat, Ghana's elections will never be the same again. The 'campaign' for votes through 'trokosi' and 'cow herd' insults, as well as the 'we Akans' and 'all die be die' would all disappear! Elections would be festive, entertaining, and there would be less tension. It is about time that things change for the better. Peace-loving Ghanaians are sick and tired of the fact that each time Ghana is going into elections, one feels as though our nation is preparing for a civil war. That is why it is very important to help them to learn their lessons. One way of doing so ought to be a zero tolerance for the irresponsible utterances from their elected officers. We need, as a people, to make such reckless comments a thing of the past. If we want peace to reign in Ghana, these are the little things we must pay attention to.

I was indeed very surprised to read today, Friday, 30th August, 2013, just a day after the Supreme Court had delivered their verdict dismissing the Akufo-Addo-led petition, the irresponsible utterances are beginning to show their ugly heads, once more. Newspaper reports indicate that the General Secretary of the New Patriotic Party (NPP), Kwadwo Owusu Afriyie, "has insinuated that President John Mahama and the vice president may have known the election petition verdict ahead of the pronouncement by the Supreme Court on Thursday." See: Sir John: Why did Mahama wear white on judgment day? | General News 2013-08-30 Source: radioxyzonline.com,

Sir John needs to be reminded that he could be hauled again before the court to give "further and better particulars" regarding the insinuation "that President John Mahama and the vice president may have known the election petition verdict ahead of the pronouncement by the Supreme Court on Thursday," simply because they were both dressed in white clothes before the verdict was announced! Sir John told XYZ Breakfast Show host Moro Awudu on Friday August 30, 2013 that:

'He knows best what went into all this. Indeed it amazes me that he and his vice president and all the people around him wore white even in the morning before the verdict came'. Sir John, therefore, wondered if the president and the governing National Democratic Congress were privy to some information about the verdict which the rest of the country did not know.

This is not just nonsensical. This is bad behaviour especially coming from someone who has been made to sign a bond of good behaviour! Since "you and I were not there" when the Justices of the Supreme Court arrived at their judgements, there is a strong inference that the insinuation of Sir John is a direct attack on the integrity of the Justices of the Supreme Court who are the only people supposed to keep custody of their judgement.

The best way to maintain the peace and stability of Ghana does not include tolerating bad behaviour from someone who is already under judicial bond to behave himself! The statement is particularly unfortunate, since the only people who could have supposedly divulged such information to the Presidency would have to be the Justices of the Supreme Court! Since such an act would clearly be deemed wrong by any right thinking Ghanaian, is Sir John not by this assertion, directly or indirectly impugning the integrity of the Justices of the Supreme Court?

Is he not frontally attempting to bring the integrity of the Justices of Supreme Court into disrepute? Sir John is no ordinary citizen of the Ghana. Even ordinary voters are supposed to be at least, eighteen years old and of a sound mind! Sir John is not only an elderly person, he is also the General Secretary of the main Opposition party. He is also a lawyer who ought to know better! Of all the troubles our nation is facing, must this be the focus of the General Secretary of the main Opposition party?

What is even most surprising about these utterances is that he has just been convicted of contempt and was supposed to have signed a bond of good behaviour or risk a jail sentence of six months! During his contempt hearing, the President of the panel of Judges expressed some uncertainty about the contrite nature of Sir John when he appeared before them. It was a gesture to peace and tranquillity that Sir John was given the benefit of the doubt and a chance to be of good behaviour.

I was not sure myself if such an apparently incorrigible hard-core adult delinquent of that nature could rise to the occasion, but I understood the wisdom of the court decision. After reading Sir John's latest outbursts, I think otherwise. The whip must crack. That seems to be the only language people like this understand. It looks as though Sir John will never change for the better. My greatest fear is that if he gets off the hook, he would quickly revert to his bad old ways.

As one commentator put it, "He has said all manner of things including saying that the President had a hand in the accident that the running mate had up north. Indeed his wise running make came out boldly debunking this claim of this demented and schizophrenic wreck." What makes this particularly annoying is the fact that Sir John asked NPP supporters to wear white even before the Electoral Commission had finished tallying the 2012 electoral results!

'For somebody who sought to usurp the power of the Electoral Commissioner by pre-emptively announcing to the supporters of NPP to wear white to church on Sunday even before all the results were for the 2012 election were in', commented Che on Ghanaweb, 'Sir John must be living in a fool's paradise for reading all sorts of imports into the President and his vice wearing white while waiting for the results of the NPP court petition.

There is nothing wrong with one having a positive anticipatory result of an awaited pronouncement. In this case the President and his vice were right while sir John's forecast with respect to the 2012 elections were foolishly wrong. Go figure who should be judging the other. Some kind of jealous posture by a misguided mind like that of Sir John.' (Comment: LISTEN TO THE IDIOT, Author: CHE, Date: 2013-08-30 10:03:25, Comment to: Sir John: Why did Mahama wear white on judgment day).

'The Gas wear white to mourn; how about that?' Nana Ansah also wrote as a comment, 'Waving a white flag means accepting defeat world wide. So for this illiterate Kokoase champion to make such a fallacious statement is no wonder because he is a Kokoase Krakye.' (Nana Ansah, Date: 2013-08-30 08:59:10, Comment to: WHY DID NPP WEAR BLACK?) Another commentator wrote: 'But NPP supporters were also dressed in white waiting at the party headquarters. did they know something we did not also know?' (Comment: Nonsense, Author: Sally, UK, Date: 2013-08-30 08:27:51, Comment to: Why did Mahama wear white on judgment day).

It must be instructive that a Law lecturer at the GIMPA Law School, Ernest Kofi Abotsi says one can still fall into the trap of contempt of court even after the judgement on the election petition has been delivered. He said 'the fact that the court's judgement has ended with the slamming of the gavel does not imply that the jurisdiction of the court' to bring contempt proceedings is ousted. Any person who makes comments on the judgment which the court considers scandalous and injurious to its reputation can be cited for contempt and punished, he said. 'When the court speaks and you say things about the court that can be deemed to be scandalizing of the court, or deemed intentional of bringing the administration of justice into disrepute, actually this is the time, in my opinion, when contempt of court may be looming large,' Mr. Abotsi stated. He was a panelist on Joy FM's Super Morning Show discussing the verdict of the Supreme Court on the election petition. (See: Watch! You can still be in contempt after judgment - Law lecturer | Local News, Myjoyonline.com|Malik Abass Daabu, August 29, 2013, 12:50 GMT)

Perhaps the best and the most prophetic comment on this was: 'You wait they will catch him again.'