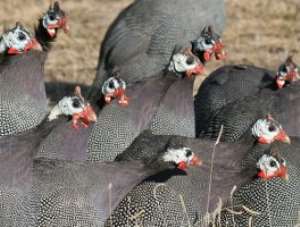 The phenomenon of global warming that is threatening ultimate desertification of countries south of the Sahara, so-called the Sahel Drift is not a conjectured warning but a real happening that is taking place and must be given serious attention. Looking back to Ghana's climate over the past 60 odd years, those of us who have witnessed the past can see a big difference in our vegetation but not so much to the climate, not for the better but for the worst.

With this change that is continuing and deteriorating Ghana's vegetation, as a didymous pair, whatever affects one equally affects the other without sparing people, cattle, wildlife and our rivers. Though it is said that nature repairs her ravages but not all, looking back at the once forested vegetation of my home Wenchi District which once produced several tonnes of cocoa, the damage caused by climate change has seen no such repairs.

What have been left of the past are yawning river valleys and sandy riverbeds as testimonies of past rending, of valleys in which water flowed with abundant aquatic creatures, beautiful flora and strange but not unusual fauna. Some past governments have sought to address these challenges but have not been allowed time and space enough while others that have accrued ample time for themselves have only paid lip-service to challenges that need serious attention for redress.

Mention can be made of the introduction of teak growing to preserve our land and the encouragement and assistance offered by the State. Amongst government programmes that have been nothing but lip-service is the much talked about Savannah Accelerated Development authority –SADA.

If Ghana's vegetation had been all savannah grassland when in 1879 when cocoa was first introduced, the crop would not have thrived to become our economic mainstay to be supplemented with gold and other mineral ore. Today, the size of available land for cocoa cultivation has dwindled dramatically over the years due to climate change.

What currently makes us linger on with cocoa production has been the introduction of new improved hybrid variety into the system and the scientifically improved plant food applied for high yield. Communities that through serendipity originated within the then forest regions had the advantage to be relatively affluent as compared to those in the non-forest regions such as the northern territories.

Governments, past and present have always been aware that our farming systems go no further than subsistence with little or no surplus for even local markets let alone international to garner foreign exchange.

Many people in the north suffer most from poverty because they cannot afford commercial farming of any sort that can create wealth and empower them economically except for local markets. The SADA idea to improve the living standards of communities in the savannah regions was excellent and indeed god given however, it appears that government's tackling of the challenges is without any achievable formula.

Between 1972 and 1978, the SMC I regime embarked on its operation feed yourself programme that sought to identify only some already affluent northern farmers to supply them with combined harvesters for rice production. This programme did not even half acknowledge the plight of majority the indigent northerners who matter most for northern economic empowerment.

What we hear and see today is a Guinea fowl project in the north that costs several millions of US Dollars to empower one and only one person. This indeed is very sad news not just for northerners but for all Ghanaians because the welfare of the northern communities, as has been the objective of many magnanimous Ghanaians is the welfare of all of us

By the doctrine of an un-written social contract, it has become the responsibility of governments to ensure that all persons live within reasonable ambits of the basic necessities of life such as food, clothing and shelter. This has been hard to achieve by any government, not even in Sweden, Japan, Saudi Arabia and the known advanced rich countries of the world, no matter how hard they try. Depending upon a person's lifestyle, socio-spiritual and cultural beliefs, mental and physical capabilities, financial management and some specific disposition towards society, homelessness, mendicancy and indigence are commonplace.

In poor and developing countries especially, several world-wide international agencies such as UNICEF, USAID, etc have set out to combat poverty, infant mortality, malnutrition etc not to eradicate them but to reduce to some minimum level yet little impact is seen to have been achieved due to the size of the challenges facing them.

'Banana Republican' countries pride themselves with self-rule yet remain continually dependent on subventions from donor countries for even basic needs. Ghana is blessed with rich verdant vegetation as well as mineral ore deposits which if properly tapped and managed, could cripple poverty in the country to non-existence level.

This script therefore looks at some of the reasons why the wheels of poverty keep on rolling in Ghana, most especially in communities that fall beyond the Volta River to the north and east where indigence is portrayed as being at its extremities.

It will also provide some useful suggestions as food for thought as to how to scotch poverty to some harmless level in Ghana. Truly Ghana depends much on agriculture therefore with an increasing 'savannarisation' of our land, appropriate crops that attract international taste and flavour must be made available to our savannah-dwelling communities as supplements to cocoa else if climate change does the ultimate damage, there will be no other alternative. We must therefore learn from the Malaysian example.

As soon as Malaysia had her independence, the Prime Minister Right Honourable Alhaj Tanku Abdul Rahman paid a courtesy visit to Ghana. Hither-to, Malaysia depended on rubber production as its main foreign exchange earner. Rubber production has been in the form of state-managed plantations with little individual involvement in production except as paid employees.

Mr Rahman had long acknowledged his country's dependency on a single crop agriculture produce and looked beyond traditional crop production for a crop from which a lot could be derived through added value for export and indeed a crop that individuals could participate in production as a means of economic empowerment for his people.

With this as his prime objective, on his visit to Ghana in 1957, Tanku expressed interest in palm fruit for palm oil production. Today, Malaysia has the world's largest palm oil producing industry for products such as mechanical fuel and oils, margarine and scores of non-industrial benefits and products from the crop. Though not indigenous to their respective countries, like a cocoa farmer in Ghana, the average Malaysian is a proud owner of a sizeable palm oil farm, the proceeds from which the farm owner is reasonably better off.

Ghana poverty is not a phenomenon that is endemic to only the northern communities but spreads across the country however, what is apparent is that whereas most northerners dramatically exhibit and bemoan being poor with well pronounced expression to hopelessness, other communities express indigence with some reservation in reluctance.

There are certain occupations that most non-northerners would hardly do unless under extreme needy pressure either by reason of self-pride, the location of the said job or that they would opt to squatter and serve someone known to them just for the interim whiles adjustments are made for a near-alternative job of same or similar value. Fallen into a similar situation, unfortunately a northerner has no such person to rely on, both at home and 'abroad'. Since people from northern communities migrate to the south ready and prepared to take on whatever comes their way even if deemed as base undignified jobs especially as local authority employees and also as farm labourers, carriers and hewers of wood etc, the perception has been that the southerner-cocoa farmer who offers farm labour job, his family and entire community should be blamed for his employee's misery.

It is so surprising that people especially of northern extraction have not yet realised that so-called socialist governments continue to bask themselves in the habit of taking them to ransom by playing to their extreme poverty situation whereas little or nothing at-all is done in the course of the many continuous years that they have been in office to reduce poverty in the north let alone alleviate it.

Northerners are abused and misused for political dirty-handed jobs by so-called solidarity comrades and dumped afterwards on to be leveraged later when required all by reason of lack of education and a feeling of diffidence.

It is the duty of all governments to ensure fair distribution of economic justice however, this SADA saga has chosen to tackle challenges confronting without any achievable formula. As I write now, I am convinced that Dr Bawumia is privy to an agriculture idea similar to that of Tanku Rahman above that is being experimented in Ghana by me and is proving successful for the entire savannah regions.

Dr Bawumia pairing Nana Addo in governance will transform the north into an enviable economic and business hob through an agricultural revolution. However, if the current on-going Guinea fowl saga can evoke economic empowerment, so be it and all the better yet the government must come out and inform Ghanaians what new innovation there is in Guinea fowl meat and eggs the likes of which both national and international tinge and sapor are craving that makes the project exceptional for SADA.

Finally, if care is not taken and if global warming challenges are not taken on seriously, as stated above, our future generations will inherit a sort of Ghana that will be arid. As part of the SADA programme, the Ghana Forestry Commission must wake up from their slumber and start creating overnight forests in the north and several strategic areas and desist from the Taungya system currently in vogue that has a high percentage of failure.