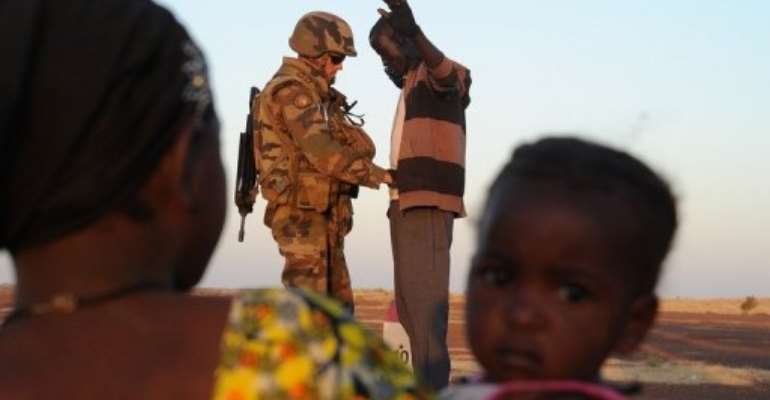 A woman and child watch a French soldier at a check point frisking a man trying to enter Gao, Mali on February 14, 2013. By Pascal Guyot (AFP/File)

BRUSSELS (AFP) - European Union foreign ministers on Monday formally approved the launch of a 500-strong EU military mission to train the Malian army, which has already begun work on the ground.

A first group of 70 EU military arrived in the west African nation 10 days ago, and Monday's ministerial greenlight was the final phase in setting up the European Union Training Mission (EUTM), which has a 15-month mandate to shape up the ramshackle Malian army.

EU foreign policy chief Catherine Ashton said the mission "is going to be of enormous importance in support of the Malian army," a poorly equipped and trained force without the capacity to maintain the country's territorial integrity.

The 27 EU nations first approved the notion of a training mission in December to boost the army's ability to fight Islamist rebels who last year seized control of the country's vast arid north.

But its launch was accelerated after the surprise intervention of France in its former colony on January 11, to stop the insurgents marching south on the capital.

Some 16 countries from the EU as well as Norway have agreed to take part in the EUTM, which will have a 12.3-million-euro budget, with each contributor nation financing its own troops.

Around half of the troops will be trainers, the remainder providing protection and administrative and medical backup.