The ‘Crown’ That May Not Fit 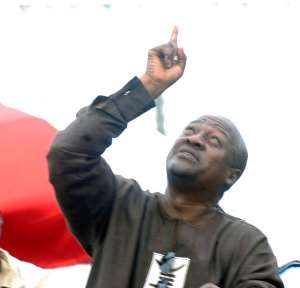 The much awaited 2012 general and Presidential elections seem to have come to a close but not yet concluded. Never in the history of Ghana spaning twenty years of its fourth Republican era have Ghanaians been as enthusiastically appetant to be bold and travelled en masse, walked out of their homes, towns, villages and hamlets, streaming to polling stations to cast their votes aimed particularly at directing their mandate to their preferred leader and members of Parliament for the next four years. For all we know, the messages of the contestants and most especially those of the flagbearers of the two major Parties were more than clear with no words-mincing vocabulary that would require further interpretation. The 'can do' spirited message of Nana Addo doing battle against the 'can't do hebetating counter mseeage without any competing alternative of John Mahamah on free quality education up to SHS dominated the minds of the voting public. This posed as a major onslaught between the two for determination as to whose head would emerge the mandated choice to wear the 'Crown' in the electoral showdown.

Closed but not concluded is apt enough in reference to the 2012 Ghana elections because jaws suddenly dropped when on the night of 9th December the chairman of the Electoral Commission controversially pronounced John Mahama, the can't do hebetating desperate assailant on free quality education as the wearer of the 'Crown'. It was the one announcement that imported a deafening silence across Ghana; a declaration that petrified almost every citizen, winners and losers alike. Yes, this is Ghana in 'Black Africa' where everything is pitch black both on the outside and on the inside because money talks; a place where anything goes; a place where trust and fairness are alien entities yet even if the prevail their emergence is persistently few and far between; a place where the people sloganise Freedom and Justice yet unknown to them as a mere populist deceptive platitude and a place where people clamour for peace and tranquility but alienate justice. As to how John Mahama emerged the jaw-dropping over-all winner, I beg the question and can only sardonically suggest that the 'spontaneous elation' his supporters especially elicited across the country at the breaking of the news told the tale.

On Monday 7th January 2013 John 'Macbeth'-Mahama goes to 'Scone' to be sworn-in, apparently to wear the Presidential 'Crown' not only with the blood of John Evans Atta Mills perpetually staining his hands and robes as it seeks justice but also with the obloquy of detected votes theft and subversion of Ghana's constitution hanging on his neck, as a writ is filed in the Supreme Court for a hearing to determine if he really is the person who truly and most veritably has the mandate of the people to be President of Ghana for the next four years. The desperation and hurry with which the electoral commission beguiled a greater majority of Ghanaians and the world to declare the 'can't do' edebee keke campaigner winner of the election can only be recounted after the matter pending before the Supreme Court of Judicature has come to a final determination. It will be written so much in style à la both Ovid and Hommer put together for education to Ghana's posterity. From this point, it sounds sad to reverberate NDC communicators who have been ingeminating that a person who is not unctioned to wear a Crown but forces to wear it loses it in no time, not realising this Kedjetia thief adage points to their own John Mahama. In effect NDC's John 'Macbeth'- Mahama happens to be desperately and undeservedly clinging on to a crown that he is not unctioned to wear.

Frenetic necromantic invocation of the soul and spirit of murdered Prof JEA Mills, ritual zoothapses of bulls and heifers at the so-called asomdwe/nyaatwim park and vicarious sacrifices in the guise of road accidents involving Presidential convoys and innocent hapless victims to facilitate Mahama win have all been pursued without shame and guilt as equivocators' occultic illusions filled their minds. The oracle's equivocation went as follows:

• John Mahama shall be controvertially declared winner amid alarm raised about electoral fraud. This notwithstanding, ye shall be sworn-in as President.

• John Dramani Mahama shall never vanquished be until the Supreme Court may direct otherwise.

Come six months to election 2012 and Atta Mills is still President, full of vigour and dances to the tune of Azonto. Mills is poisoned the next day and hurriedly buried whiles John Dramani Mahama is quickly sworn-in as President. The first prophesy is fulfilled. Mahama and NDC mock Mills' death as timely divine intervention to avert a would-be perceived 2012 electoral defeat

7th December 2012 arrives, people turn-out in their numbers to vote for a change, ostensibly for free quality education for all to SHS level. Schematically, to achieve a particular objective, voting in several particular polling stations breach electoral rules as enshrined in the Constitution of Ghana. Faxed Electoral forms containing constituency results are unlawfully intercepted and re-faxed with transmuted figures. Alarm blows. John Dramani Mahama is controversially declared winner notwithstanding. The fulfilment of this unsavoury part of the oracle's prophesy still maintains some glimmer of hope because the 'notwithstanding' clause is not yet exhausted so John would be sworn-in as President. John consults his 'Ahithophelic' scribes and advocates for advice and direction. In their sciosophy as they are always wont to be, beleagured John is soothingly advised that the cheating was so perfectly scientifically and technologically designed and executed that there can be no evidence whatsoever however, even if any is found and tendered, as a continuing sitting President, once he is sworn-in again as President for another term of office, he would remain above the laws of Ghana and cannot be made to appear before any court of law in the country. But instinctively and realistically John now senses severe pressure and begins to accede to dismay when he learns from better erudite brilliant advocates from his pursuers side that his human image as leader and flag bearer of a political Party rather than his legal personality image as President can be sued and is what they have sued. If sueable, then the Courts of the land can direct anything otherwise juridically justifiable against him as a citizen. Here ends the gospel of the illusive equivocal prophesy that may perpetually shame and disgrace occult-inclined power-drunk John Dramani Mahama who on Monday 7th January 2013 will porrect himself at 'Scone' to be crowned with a 'headgear' that may not fit his head.

Like the mystery Cinderella pair of shoes, the Crown, this time may probably have been designed particularly for the head of the most principled yet misunderstood hence the most feared, the most hated, the most despised and the 'Cinderellared' Nana Addo Dankwa Akufo Addo, whereby it wouldn't fit anybody else's head let alone that of John Mahama's, known thief of Baghdad however, in the interim and in fulfilment of the oracle's 'notwithstanding' clause in his prophesy, it may, for the sake of convenience be adjusted with straps fitted to hold it in place to fit though he would feel very uncomfortable in it as if it were composed of nettle for which matter he would put it down sooner or later afterwards.

The massive and impenetrable forest of evidence that has marched its way to the Supreme Court, purportedly to militate against an alegedly perpetrated electoral fraud with enough force to demolish it once and for all is more than likely to justicerily exhort and impel the chairman of the Electoral Commission to countermand the misplaced Crown and put it where it rightly belongs according as Ghanaians have demanded it.

As a prelude to acceding to and impliedly conceding defeat, things unthinkable are beginning to happen as even Presidential state of the Nation's address has had to be delivered in two phases; a new creation by John whose mind is currently full of worms over grave uncertainties. Does John have any reason to be dismayed and accede to imminent defeat? He realises he has the worst constitutional case ever to respond to whiles his trusted legal team have proved themselves to be non-starters.

John's oracle has delivered an equivocal prophesy that he is more than likely to live to regret for the rest of his life; an event for which he is likely to remain wistful never to have ever come to pass. John Mahama would wish to have lived a better and happier life as former, though stained with scandals Vice President for three years and 'spare tyre' President for six months than having forged ahead to, by dubious means, completed a vicious cycle of moral and Presidential stigma including disgraceful thievery that would stain and tarnish his image; an incident in his life that will remain in Ghana's and the world's political history books for ever. Whether the Crown be adjusted to fit or not, John may live in doubtful joy thereafter with the most likelihood that the Crown will surely be given back as it wouldn't fit.