In The Supreme Court, Governance Reloaded 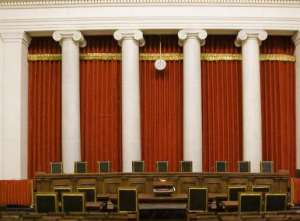 End of the year, the last Critical News of 2012 and next year starts off just as exciting if not more exciting. We have traveled a very interesting path this year with economic success and political peace pipes, yet there is so much more needed. Our oil discoveries are improving; we have $3billion of Chinese money to spend and looming judgment cases in court. We have major legislation to enact for freedom of information, economic policies to change and another year fighting the banks for access to capital. Industry has to grow and the Ghana Stock Exchange has finally announced that it will introduce a new Ghana Alternate Index (GAX) to encourage small and medium enterprises to list on the market. All encouraging and exciting and we must show the will to change and implement.

So the New Patriotic party filed its challenge to the 2012 election results and Johnson Asiedu Nketia of the NDC said publicly that any idiot could go to the Supreme Court in Ghana. Well, some idiots filed a petition to challenge, according to them, the idiocy of an attempt to manipulate the future of Ghana by his party.

Ardent historians will see the significance and parallels at the crossroads of our time. The opposition party filed their challenge to the 2012 election results on Friday December 28th and calmed the nerves of its supporters, at the same time wedging the NDC's talking heads. For many days the NDC voices have been on air, cleverly manipulating the rhetoric that the NPP had nothing to show Ghanaians regarding voting results manipulation. Internally, Ghana is crowing, achieving peace and quiet with a calm that belies tensions crafted from several decades of suspicious election results.

Now that the challenge is filed and the NPP claims the degree of drift from the published and declared results could be as much as 1.3 million votes, we are in court to see how this stacks up and whether or not the evidence can back the claim and give the learned Justices enough to call for a decision in favor or against. In last week's article I suggested that the Supreme Court has one of three options. If this challenge corrects the aberrations in our voting process, it will be by far the most consequential change in our history. Forget that Nana Addo is declared winner or loser; we have a chance to fix this voting rancor once and for all. But I say this with caution.

In 1963, Kwame Nkrumah dismissed Chief Justice Sir Arku Korsah. The follow through after that was the beginning of the end of democracy in Ghana until 1969. January 1960, the CPP Government called for a plebiscite on two issues. The first would “invest the President with power in his discretion to dismiss a judge of the High Court at any time for reasons which appear to him to be sufficient”. (I hope readers are cringing at this preposterous situation at the time), the other would “provide that there will be one national party in Ghana and that one national party shall be the Convention People's Party” (cringe again). Sir Arku Korsah was dismissed in accordance with the Constitution. The Ghanaian Times, which declared that he had “failed in his duty, let his leader down and betrayed his country, by not telling Nkrumah before hand what the verdict would be”, welcomed his dismissal by Nkrumah. It's Op Ed was referring to the acquittal of Tawia Adamafio, Ako Adjei and Coffie Crabbe in the Kulungugu assassination attempt on Nkrumah.

To fix this, Nkrumah went to the people. The plebiscite was on the two issues. When the votes were counted, out of a total of 2,877,464 (92.8% turnout, Austin – Politics in Ghana, page 414) “Yes” votes counted 2,773,920, “No” votes were 2,452. As recorded, Brong-Ahafo, Ashanti, Western, Central and Eastern Regions all voted 100% for Nkrumah's sweeping powers and a one party state. Not a single “No” vote was recorded from each of these regions. According to Government voting agents, 96% Ghanaians voted “Yes” for a dictatorship.

Lets not forget that JJ and his gang of revolutionaries' remedy to this judicial independence was to abduct and murder the judges who went against PNDC revolutionary rhetoric. Tomorrow December 31st, JJ is planning to celebrate his version of democracy. Despite the metamorphosis to a man of peace and calm, our “Chaos Manufacturer” chooses to celebrate a violent and treasonous takeover of Government to make a statement of what?

Let me lift a few words by Dennis Austin from “Ghana Observed, page 88”, looking back on the post-independence struggle and political dominance in Ghana; “Indeed, much the greater danger lies precisely in Nkrumah's weakening of institutions of State authority – the judiciary, the civil service, the police and the armed forces. Even interference from outside is more likely to succeed in a situation of inefficient suppression than among legitimately established groups competing openly in parliament and at free elections”. And the coups d'etats started coming one after the other.

All this history reminds us of the penchant for dictatorship such as characterized Africa in the run up to independence and the fight against colonialism, and they are powerful reminders of where we cannot afford to steer our democracies, which are constantly under threat until we are able to mold our cultural values with the Western style democracy we have adopted. If this case should go against the NDC, Ghanaians expect the Supreme Court to present the wisest and best path for us to continue to feel best pride of place in African Democracy evolution. If it should go against the NPP, Ghanaians expect no less from the Supreme Court. Chief Justice Georgina Woode has probably not been in a tougher place ever. Whoever she empanels to sit on this case must elevate themselves to judges of destiny. Our Governance starts again.

I have seen a copy of the press release given by the NPP, but it should be on their website and other media sites by now, and the rest of Ghana can see first hand what will be argued in the days to come. The writ was served on John Dramani Mahama at the Castle, Osu and the Electoral Commission at their headquarters at 12.20pm on 28th December. It is 24 pages long including references etc. as lawyers do. If correct, Nana Addo gets 50.28% of the votes and John Mahama ends up with 48.26%.

Nana Addo has publicly declared that he will accept the decision of the Supreme Court, whichever way. Ghana is yet to hear from President Mahama, whether he will do same. As I write this piece, he should be on his way back from South Africa. I think the greater challenge is on President Mahama to avoid destabilizing Ghana in any way. Clearly the Nkrumah and JJ type solutions are not the way to go. At his age, Nana might have one more shot if he loses this one; President Mahama has history to make and a nation to build or destroy.

And this week, JDM flew to South Africa for a private visit. He neither had a send off, nor did he celebrate his victory with party supporters the previous day as arranged at the Trade Fair in Accra. Subsequently, we hear rumors of a kidney transplant, denied; but some other unsavory remarks crop up. Circumstantially, he has created a little storm, seeing as Ghanaians expect he would be planning his team and meeting with Institutional heads, writing his speech for the State of the Nation Address, and much more, but maybe he is doing all this on a working holiday. Someone sarcastically commented to me that these things come up when it is not clear what you are up to and we repeat this mistake throughout the lifecycle of our Governors.

Well, after the filing, I de-stressed by going to watch “Contract”. It was very well done, a good story, very technically competent and great acting. When the time comes to nominate film professionals, I am definitely naming Shirley Frimpong-Manso for direction and Yvonne Okoro for a brilliant script and equally brilliant acting. It is a funny and engaging love story with some good pertinent Azonto lyrics to support. Yes GH! putting Nollywood in “b” place.