Ghana Elections 2012: Why The Best Candidate Did Not Win 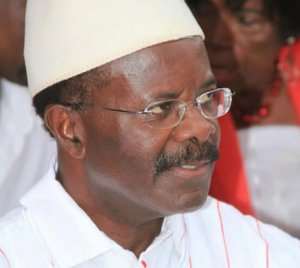 Please what was the main reason why the NPP lost? Was it because of :

1. Elections Manipulations and Rigging?
2. Issue of demographics?
3. That you can easily buy the votes and the conscience of people and they don't think long term only what they can get here and now?
4. Or the Reason is below here?

Prez Election: Why Best Candidate Did Not Win: No Political Party Will Be Allowed To Steal This Year's Presidential Election

When a friend in the U.S.A. asked me who I thought would win the presidential election in Ghana, for an answer, I told him who I knew would definitely not win that election – by recounting to him what a brilliant young female student told me, when I asked a group of university students the same question.

In the view of that brilliant female student, nothing would change in Ghana, regardless of which candidate of the two major political parties that have governed the nation since the 1992 constitution was promulgated - the National Democratic Congress and the New Patriotic Party - won the presidential election, because both simply lacked the political will to fight high-level corruption: which she regarded as the biggest nation-building challenge facing Ghana.

The tragedy for Ghana, she said, was that the person who had shown, by deed, not words - by making public the results of the medical examination he underwent to show he was medically fit for the ardours task of leading Ghana; releasing his filed tax returns and declaring his assets openly to the media; as well as showing the amount spent on campaigning by the party

he founded, and the sources of its funding to show he was transparent about financial matters he was associated with - would not win the presidential election.

She ended by saying she was certain that Ghana (a nation full of "My-party-my-tribe-right-or-wrong" myrmidon-types) would miss the opportunity to elect the candidate who had shown the discerning that he was the most suitable politician to lead the Ghana of today, for a number of

reasons - all of them negative.
To begin with, it was her opinion that Dr. Paa Kwesi Nduom of the Progressive Peoples Party would not win the presidential election, because: "Behind the facade of modernity, in terms of the psychology of a majority of the populace, in a sense, Ghana is a nation in which superstition is rife and deeply woven into the fabric of society.

That is one of the reasons why the political party most favoured by sundry crooks-in-dog-collars - who speak in 'tongues' and exert a malevolent influence over the minds of the millions who flock to their churches regularly to seek 'prophetic anointing' and 'protection from spiritual enemies' - can garner a substantial number of votes in elections. And, lastly, tribal bigotry is written into the DNA of some of the most

prominent and influential of today's descendants of the pre-colonial traditional ruling elites - who, even though it is a democracy, still seek to dominate the Republic of Ghana through the back-door by proxy – and those ordinary Ghanaians who hold fealty to them, often demonstrate their allegiance by voting for the political parties such tribal-supremacist traditionalists support." And well said, say I.

How insightful that young Ghanaian was. Alas, indeed as it turned out, most voters did not vote for the candidate who by voluntarily undergoing a medical examination and making public the results, as well as releasing his filed tax returns from the 1980's to date; and publicly declaring his assets to the media, and topped all that by revealing the total amount spent by the party he founded and the sources of its funding, showed Ghanaians (including a doubting-Thomas like me who has often criticised him in the past for attempting a reverse-takeover of the party founded by the great Osagyefo Dr. Kwame Nkrumah, the Convention Peoples Party – and advised he leave Nkrumah's party to set up one of his own, in which he could call the shots), that in good governance terms, he was the best amongst this year's crop of presidential candidates - and could offer the kind of sorely-needed world-class leadership (underpinned by an ethical ethos), which the people of Ghana and their peaceful and democratic nation require to prosper.

Sadly, dear reader, as it turns out that young female university student was right in asserting that the candidate who proved he was best suited to lead Ghana, would not win the presidential election - and that Mother Ghana will be the worst for it. Pity.