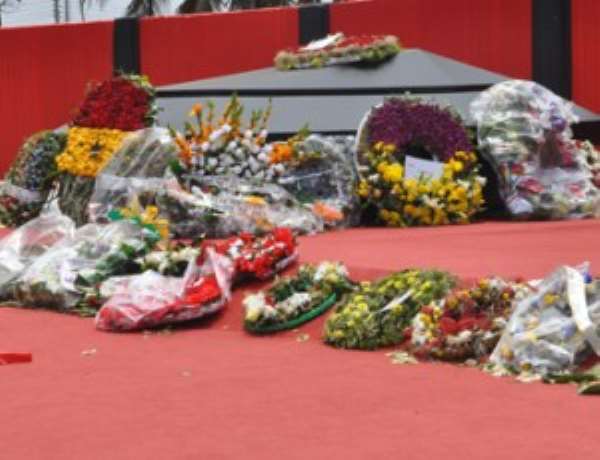 Suddenly the NDC spirit is back! And the NDC party which had reeled under series of pressures upon pressures for almost four years suddenly has the political energy and wind behind it. You can feel and sense it everywhere you go these days.

The NDC's confidence which started moving up about two weeks ago suddenly peaked last Friday November 23, 2012.

As a result, I can say with all certainty that the NDC party now has what it takes to win the election one touch. The party's campaign strategy has put Akufo-Addo and the NPP where it has to be. And I must repeat that suddenly the NDC spirit is back!

It is a fact that NPP supporters are loud. They demonstrate it everywhere they go. As a result, during the 8 years that ex-president Kufuor was in power most NDC supporters turned mummies during political arguments at drinking spots, chop bars, mechanic shops and playgrounds among others.

The NDC supporters largely became silent listeners with most of even failing to declare their political affiliation.

But something happened, however terrible and sad which changed the course of the 2012 election campaign towards NDC's favour: The passing to eternity of ex-president Mills on that fateful Tuesday July 24, 2012. I must say that the outpouring of grief, love and affection by the massive NDC supporters throughout the country and beyond during the passing of President Mills restored the confidence of the NDC teeming supporters.

President Mills' death brought the NDC together and even put a dagger to the constant jabs the party continued to receive from JJ Rawlings. Suddenly, President Mills, the man the NPP and some evil NDC members turned into their daily punching bag was no more throwing their evil campaign strategy into disarray.

The death of ex-President Mills and the courage and maturity shown by current President Mahama has largely contributed towards the restoration of the confidence within the NDC. And I must say that since the passing of President Mills the NDC had not looked back but has done well to peak as the campaign goes down to the wire.

With 7 days to go before the first ballot is cast, I am making a fervent appeal to the NDC top hierarchy to organize the teeming supporters to go to the graveyard of President Mills at the Asomdwee Park on Wednesday December 5 for a Special Prayer Service in the morning. That Special Prayer Service which will again see the outpouring of grief will enable the party to pray and ask for God's guidance and direction before the elections.

I don't care what the opposition NPP will say if the NDC organizes such a Special Prayer Service but it is something that will work in favour of the NDC. Trust me, if the NPP have such an opportunity they will easily have taken advantage of this and even overdo it; therefore, the NDC should put it on their agenda and do it.

With the political wind behind the NDC and everything suddenly going good for them, the visit to the grave will spur the NDC supporters and charge them to turn out massively in their numbers to vote on Election Day on Friday, December 7.

The spirit of President Mills lives. He continues to inspire the NDC as we prepare to go to the polls. A win by the NDC next week, will be the best tribute that the NDC can pay to the memory of President Mills who gave his all to the party. Therefore, I am pleading to the NDC top guns that, LET's GIVE THIS ONE TO FIIFI by visiting his grave.