“The Living Biafra:” The Settled Answer to the Falsehood called Nigeria. Get Your Copy Now and Be Glad You Did 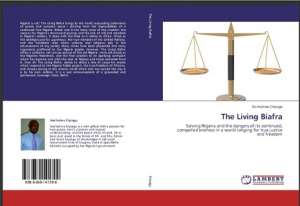 The Living Biafra (https://www.morebooks.de/store/gb/book/the-living-biafra/isbn/978-3-659-14179-9) is a compendium on world politics, majoring on its effects on Africa, especially on the 1914 amalgamated Nigeria of the West Africa, the indigenous people of Biafra, and its repercussive effects on a world seeking the complete enthronement of true human rights, democracy and the rule of law. It is a timely-written book which deals with the Nigerian state, her birth, existence, citizens, politics, developments, loses, consequences and history, in explanatory manners, from a new angle and with the intentions to educate, not just those bound for close to a century by this name, Nigeria, but everyone, on the needs for a detailed analysis of

where we presently are, where the Nigeria of today is inevitably going in its lawlessness, and the indispensability of a Sovereign National Conference, so as to enable the different nations, bound by the ever-declining statehood of Nigeria and the woes of demands through ethnic cleansing and religious terrorism, determine through a most peaceful way how to wriggle out of an age-long stagnation and backwardness which has told greatly on us all, both in our relationships with one another as fellow compelled-citizens, and our relationship with the rest of the world. Viewing the earth as a global village, it will be correct, therefore, to state that human rights denied Biafrans is human rights denied the whole of Africa; and this denial goes a longer way to affect the global goal for peace and prosperity.

After a very committed time and focus, painstaking and well-done research on the country, Nigeria, I have decided to write this book (https://www.morebooks.de/store/gb/book/the-living-biafra/isbn/978-3-659-14179-9). My goal is not an outright discrediting of a false amalgam called Nigeria as negative criticism would assume, but as one deeply concerned with all Nigerians with whom I have shared the continued and downward spiral retrogression of this country created by the racist Britain whose only vision of/for Africa is the land of the slaves, I intend, however, to show that Nigeria, as a single country, has and still actually does more harm than good to a world which has long woken to awareness. With the birth of the Biafran nation, the pathetic stories and woes in today's One Nigeriaand its undeniable repercussions on the entire world would never have risen in the first instance had the Nigerian government and its ignorant and racist allies not fore-stalled the progress of Africa by supporting and standing by Gowon and his genocide machine and tendencies as he carried, even as his One Nigeria still does today, acts of genocide against the Igbo/Biafrans.

A geographical area filled with every conceivable blessing and coated in the light of divine favors, would be expected to be the envy of all, fifty-two (52) years after its independence. A forced-country with vast history and experience (such as Nigeria is and has) should be looked upon by other smaller and less endowed nations in matters of governance, democracy, justice, security, prosperity, peace and progress. A people whose population is over one hundred and sixty (160, 000, 000) in Africa ought to be looked upon to adequately match its quality of leadership with its ever-increasing and diversified population. But it is not!

This is my first book, and it's another approach in my affirmative and emphatic stand for unrestricted true human rights, justice, equality, security, peace and progress for all. It will serve as a rich archive to those interested in the political and economic goings-on in Nigeria and how it has, for decades, affected the lives of the occupied nations, especially the Igbo/Biafra, within the compelled One Nigeria since independence. Students of history may also find it a helpful guide in their works. The points in this book are not new to many men and women who, at different times even before independence, had ruled Nigeria, either directly or through proxy. The details are, however, intended to give all Nigerians, especially those of Igbo nation, and those indirectly involved, a clearer picture of where we are, who we have become, and where we are evidently going with the Nigeria of today. Not denying the roles of the international community in the quests for human rights in this part of Africa, this book also speaks to the United Nations, Britain, USA, the Arab World, Israel, and all countries with stakes in this global family, on the need for exemplary statesmanship. It deals with the realities of an impossible continued-One Nigeria, the urgent need to integrate the republic of Biafra into the UN membership of nations as a nation which is intertwined in many ways with the rest of the world in the pursuit of justice, human rights, and happiness. This book serves, in many ways, as a collection and a picture of the continued enslavement of the Blackman as he desperately and rightly seeks for justice, equity and his human rights. Over all, it deals with the realities of the impossibility of peace without justice – anywhere in the world. As you read through the pages of this book, these works of genuine and true passion will, undoubtedly, stir a passionate reaction. For those who seek the truth, they will experience a total relief for assurances. To those who have erred but want the right way back home, they will find, within this inspired work, a willing hand to guide them home. And to those whose selfishness has given birth to an in-dwelling spirit of callousness and hell-bound arrogance, they will meet with the results of their rebellion against the spirit of truth. So, no matter from which angle you may want to approach this book of truth which contains in it our history, present goings-on, and the consequences, there is indeed something in it for you…and for everyone.

The history of the genocide in Biafra can be found everywhere, however, with this book, I am not only refreshing the readers' memories in a carefully pictured analysis but stating what must be, what will happen and what is eternally inevitable to the obviously fizzling Nigerian State, and the emergence of a sustained Sovereign and democratic State of Biafra, alongside other nations. I also, through this book, address nations whose love for money (which is the root of all evil) constantly fuel the chaos in the world which they know absolutely nothing of its reality. Not only will you surrender to this truth, you will see them come alive in your days. It's my hope and prayer that, after a careful read of this masterpiece, you would agree with me that, not only does Nigeria portend several dangers to its unwilling citizens and beyond, the outright and only remedy would be a speedy and peaceful dissolution of its false amalgamation. This is the first step towards remedying Africa. Issue of why Nigeria became, Britain and its relationship with Nigeria's immeasurable woes, the obvious failures and consequent death of Nigeria, the destiny of Biafra, Africa, America, World Powers, Nuclear race, the Arab World and Jerusalem are discussed extensively and summarized in the clearest understandable manners. The slight repetitions and images you may come across are intended to give readers, especially those with little or no knowledge on the Nigeria-Biafra conflict, a grounded root to a clearer picture of the truths and the inevitable.

I have not come here to make an academic statement; I came with a message to a world of callous competition: Lose your hold or be bound! As you read, prepare your mind, at the end of it, to take a stand which will affect this generation and beyond; a stand which will unmistakably place your name on the good side of the history of world keepers. God bless you all.

To The False Critic: If it were dependent on you, Paradise would be gained solely by enslaving for and paying obeisance to you; how much less of justice can man hope to get on earth with your ilk! But, thank God! Victory is not because you said so. Let the truth reign, or be drowned in your falsehood. You can get your copy of The Living Biafra on More Books at https://www.morebooks.de/store/gb/book/the-living-biafra/isbn/978-3-659-14179-9. Get it, spread the news, and be ever glad you did!