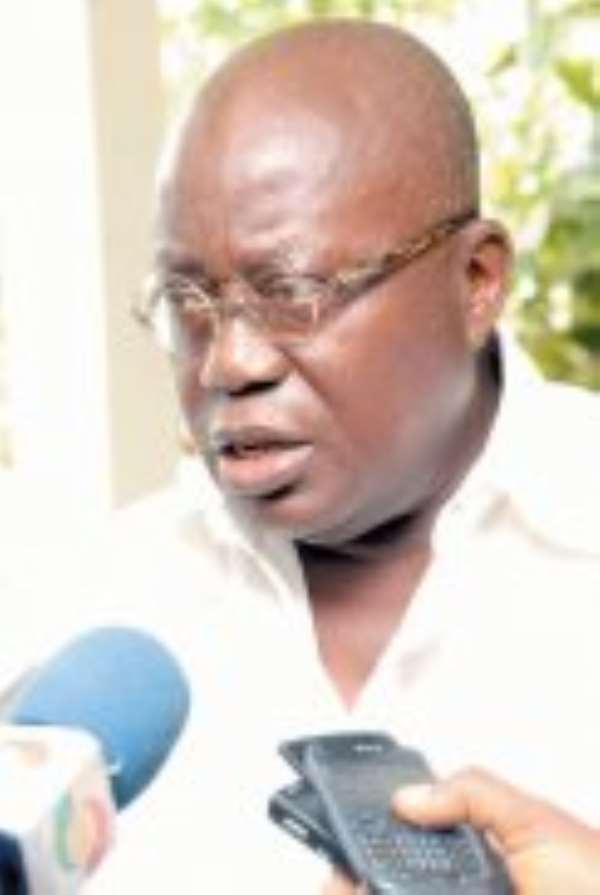 I am beginning to think that the NPPs presidential candidate, Nana Akufo-Addo, may have given up on the up-coming 2012 presidential elections. Or to put it in another form, Akufo-Addo may no longer be interested or serious about becoming the next president of Ghana. I am saying this because of Nana Akufo-Addo's absolute silence and missing in action posture ever since the NPP's MP for Assin North, Kennedy Agyapong, made some unpardonable and highly contagious statement on the Oman FM Station last Friday.

The evil intentioned statement by Kennedy Agyapong which has the tendency of plunging the country into an unnecessary and unneeded war has roundly received condemnation from some right thinking and peace-loving Ghanaians except his own NPP folks who do not see anything wrong with what he said, hence their decision to stand by him with some stupid and unimaginable excuses.

Readers would recall that Kennedy Agyapong who has the penchant to talk loose without any recourse to reasoning and common sense, publicly called on Asantes to bloodbath Ewes and Gas. Kennedy Agyapong, who on that radio station usurped the powers of the sitting president and unconstitutionally declared war, urged Asantes to annihilate all Ewes living in the Ashanti region by attacking them with machetes and cutlasses. Kennedy Agyapong, who seems to have been possessed by some evil spirits at the time, further warned that any security personnel who would try to keep the peace in the Ashanti Region will be lynched.

“Today, I declare war in this country, Gbevlo-Lartey and his people, IGP should know this. Voltarians in the Ashanti Region will not be spared. If anyone touches you, butcher him with a cutlass…”, Agyapong stated.

This was a highly volatile and divisive statement ever to come out from the mouth of any living politician in Ghana. But strangely enough the cheer-leading NPP folks saw nothing wrong with it when some of their leading members went on air to defend Kennedy Agyapong's reprehensible comments.

It was four clear days after the terrible ranting by Kennedy Agyapong that the NPP leadership realized how serious the issue was. Even then they only came to their senses when some well-meaning Ghanaians started to condemn Kennedy Agyapong. The NPP then made a 360 degree turn and quickly issued a lame statement mildly distancing the party from Kennedy Agyapong's mad talk. But as the NPP was trying to run away from the political implications of the Kennedy Agyapong's irresponsible declaration of war, the leadership of the party also organized the hooligans of the party to cause chaotic scenes at the Police Headquarters in Accra on Monday.

This foolish statement by Kennedy Agyapong should not have taken more than two hours for any serious minded person who is running for the highest office in Ghana to come out to condemn it, and also distance himself from it. But carefree Akufo-Addo is nowhere to be found. Perhaps Akufo-Addo is thinking that the ill conceived statement is Kennedy Agyapong's own cup of tea.

If we are going by the country's 2000 Population Census, whilst Asantes form 14.7 per cent, Ewes constitute 12.7 per cent with Gas pulling 3.4 per cent. If you combine Ewes and Gas according to the 2000 census, they total 16.1 per cent of the country's population, therefore, you cannot afford to mess with these two ethic groups (Ewes and Gas). You vilify them at your own peril. Even in the Greater Accra Region, the Ewes come second on the population ladder with 17.9 percent with Gas leading with 18.8 per cent. If you venture into the Volta Region, Ewes pull 68.5 per cent whilst Asantes chip in with a negligible -0.8 per cent. In the Asante Region, Ewes place third with 3.1 per cent with Asantes leading by 61.5 per cent.

Already, the Ewes and Gas have always looked at the NPP with suspicion that they only need their votes but have nothing good to offer them or say about them. Therefore, Akufo-Addo's silence on Agyapong's mad ranting is only going to hurt him in the polls in December. Any serious politician running for president will not keep quiet over this issue for more than a week. And I bet, Akufo-Addo will pay big time come December. They say silence mean consent, therefore, it is already sinking in to Ewes and Gas that Akufo-Addo consents to what Agyapong said which is why he is not commenting on it.

They say politics is about numbers, which is why serious politicians who aspire for higher office do well to court voters from all blocks (ethnicity and tribes). As a result, politicians do well to stay away from inflammatory statements that may turn off voters.

But in the NPP world they see no evil or hear no evil from any recalcitrant member which is why I am predicting that Kennedy Agyapong will sink Akufo-Addo's presidential ambition.