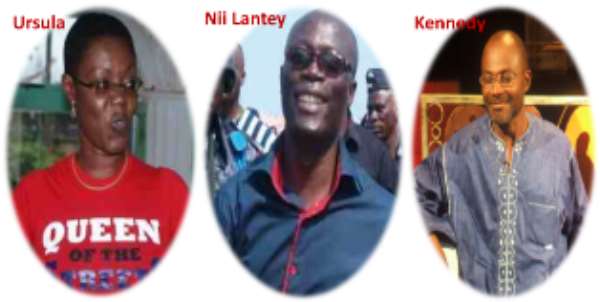 It is hugely unfortunate that the on-going biometric registration exercise is being disrupted by some reckless and power-conscious individuals and groups. This ugly development is obviously contrary to what the Electoral Commission and the entire nation anticipated. The good news however is that, we now get some idea of that which could happen in the December elections if the Ghana Electoral Commission and the nation's police forces do not move swiftly to put some vital anti-violence measures in place ahead of the December's polls.

Even though the on-going biometric registration exercise is evidently being marred by a number of irresponsible pronouncements, assaults, and other violent activities, including shootings resulting in the loss of lives; the incidents that have manoeuvred their way onto the front pages of most of the nation's tabloids and electronic media outlets, and have now become the key subjects of radio and TV discussions, are those involving Ms Ursula Owusu, Mr Nii Lantey Vanderpuye and of course Mr Kennedy Ohene Agyapong.

Interestingly, the massive attention being paid to Mr Agyapong's reckless utterance is not only dwarfing the cocaine-turned baking soda and the 51 million cedis judgement debt sagas, but actually sinking them into oblivion. What a relief for Mr Woyome!

There is certainly no smoke without fire. A diligent scrutiny of the three incidents in question demonstrates that they are greatly interconnected. It will thus be impossible to arrive at credible conclusions and solutions without investigating them in unison.

Was Ursula's presence at the registration centre in the Odododiodio constituency where she was allegedly assaulted, necessary? Absolutely not; she was definitely in the right place at the wrong time. One fundamental human right enjoyed by every law-abiding Ghanaian is freedom of movement. Ursula thus has every right to go to any region, city, town or village in the country at any time, as her freedom of movement has not yet been restricted by any court of law.

However, her decision to go to the registration centres in the Odododiodio constituency apparently to confront certain NDC agents who were supposedly intimidating the representatives of the opposition groups and preventing some NPP sympathizers from registering, was clearly irrelevant, unless her motive was to replicate Nana Yaa Asantewaa's heroism by declaring herself the commander-in-chief of the NPP “army”, in what I term, the “battle” of Odododiodio.

The fact is, even if such intimidation and abuse occurred, those whose intervention was needed were law enforcers and peace-makers – who obviously are the Police and the judiciary; not Ursula. If the NPP was desperate to get a top political figure there to offer some form of support and consolation to their supporters, their parliamentary candidate for the Odododiodio constituency, would have been a better choice than Ursula.

I personally repudiate the claim that Ursula insulted the Ga people, as the allegation is greatly inconsistent with her intention to contest the Ablekumah South parliamentary seat in the Greater Accra region. Why would she insult the very people that she will be considerably counting on to win the contest?

Nevertheless, neither the veracity nor falsity of the allegation justifies the assault on the lady politician. In other words, the alleged assaulters had no right to touch her even if she used a foul language against Ga people. If they thought a vocabulary she used was offensive to the Ga people, lodging a complaint with the police backed by evidence, would have been the sensible and legal step; not retaliation. Undoubtedly if all Ghanaians were to disregard the constitution and revenge every offense against them, 'bellum omnium contra omnes'– the war of all against all, would be the order of the day; and the nation would slip into a state of diametric pandemonium.

Ms Ursula Owusu should be scolded and cautioned for her unnecessary and probable provocative confrontation of the purported trouble makers at a registration centre that she had no significant links with. But her alleged attackers should be fished out and put on trial for unlawfully battering the lady.

The presidential aide and NDC parliamentary candidate for the Odododiodio constituency, Mr Nii Lantey Vanderpuye, is certainly not as innocent as he claims to be. His crime is probably more serious than those of Ursula's attackers and Kennedy.

Even though he vehemently denies the allegation that he orchestrated the mayhem at the registration centres within the Odododiodio constituency, and was the brain behind the alleged assault on Ms Ursula Owusu and Mr Abu Jinapor, a statement he made on Asempa FM and other platforms shortly after the incident compels me to question his claim of innocence.

He maintains that he was only trying to prevent non-residents of the area from registering at the Odododiodio registration centres; an action he asserts was in conformity with the Electoral Commission's directives. It later became obvious that Nii Lantey had no clear knowledge of the Electoral Commission's interpretation of the term 'resident' or local. So who was he preventing from registering, since he couldn't accurately interpret the term 'resident' as used by the EC? Is he the one to determine who registers at registration centres in the Odododiodio constituency and who doesn't? Is he an employee of the Electoral Commission?

To be fair, I do not believe that Nii Lantey actually organized and instructed some NDC supporters to attack members of the opposition parties with clubs, machetes, pickaxes, sledgehammers, and what have you, as the NPP alleges. But I have no doubt on my mind that the supposed violence that ensued at some registration centres in the Odododiodio constituency was partly, if not wholly motivated by some of his comments and actions.

He has remarked on various occasions that Ursula provoked the NDC mob into beating her, and that she deserved what she got as she had no business there. His statement clearly seeks to justify the attack on Ursula and to encourage the introduction of the obsolete 'lex talionis' (the “an eye for an eye, a tooth for a tooth” rule), in our society. What other comment could be more dangerous than Nii Lantey's declaration? I believe Mr Vanderpuye's statement would have been more responsible if the attack had been carried out by NPP supporters on his sister or a female relative, for a similar allegation.

Does he have any idea of the number of people who would lose their lives in the country if people were to take the law into their own hands and attack or take revenge on anyone who provoked them? One begins to question the competence and maturity of our leaders when such unpleasant comments are passed by people in positions of authority. If this had happened in any western country, Vanderpuye would have been relieved of his post as presidential aide and prosecuted for OK'ing the law of retaliation and encouraging lawlessness.

Mr Agyapong has succeeded in tagging himself as a person who spends much more time talking than reflecting or remaining silent. I am at times compelled to think that the only time he probably keeps his mouth closed is when he goes to bed. But considering the fact that those who talk too much during the day usually “dream aloud” when sleeping, I doubt if he ever keeps the mouth shut for more than an hour.

It is obvious that his despicable utterance was motivated by the alleged mayhem cause by some NDC supporters at some biometric registration centres in the Odododiodio constituency; and the unpleasant statements by Mr Vanderpuye. I will in fact be the very last person to believe that Kennedy meant what he said on Oman FM, considering the fact that his children's mother belongs to one of the tribes he was apparently waging war against. But I have to be cautious here because in this political and power-conscious world, anything is possible.

Conversely, it will be more difficult to convincingly defend his action than to make a camel pass through the eye of a needle. He should unquestionably be made to atone for his iniquities. But the big question is: is his utterance tantamount to treason, felony, genocide, and the like? I did laugh my head off upon learning that he has been charged with treason and the intent to commit genocide. Do these people really know the meaning of treason? They may not know the real meaning of treason but they certainly know what they are doing.

I will welcome the charges against Mr Agyapong only if people like Prof Kofi Awoonor, Mr Addo Dankwa Akufo-Addo, Mr Nii Lantey Vanderpuye, Mr Koku Anyidoho, Prof. Kwame Okuampa Ahoofe, and others are also apprehended and charged with the same offense. People should not allow themselves to be blinded and be insensitive to the feelings of others by politics and the unquenchable desire for or to hold on to power.

Emmanuel Sarpong Owusu-Ansah (Black Power) is an Investigative Journalist, a researcher and the author of Fourth Phase of Enslavement (2011). He may be contacted via email: [email protected]