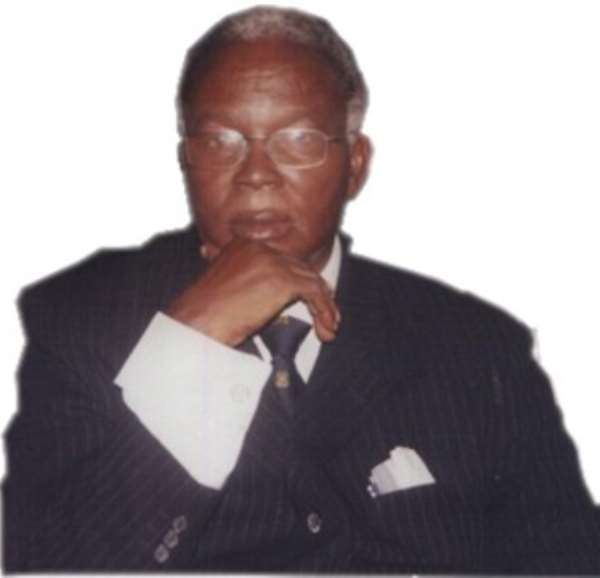 The 267-page book with launched in Accra, is titled: “Technology Should Seek Tradition: Studies on Traditional Land tenure and Small Holder Farming Systems in Ghana”.

Professor Benneh, a distinguished international consultant on land Tenure and Agrarian Systems to the UN Food and Agricultural Organization, indicated in his book that in determining the path of development of rural communities in developing countries where majority of poor farmers live and in whose benefit development should be targeted, there are two policy options – revolutionary transformation and evolutionary change.

He argued in the book that the case for the latter policy option, that is, traditional farming systems and technique should be incorporated into application of modern science and technology to agriculture in Africa.

The book covers farming techniques and traditional land tenure arrangements in all ecological zones in Ghana from Anloga on the South east coast to Lambusie on the North Western border.

Reviewing the book at the launch on Thursday, Professor George Hagan, Former Director of the Institute of Professional Studies said, "It is a piece that provides a major understanding to culture and food security in Africa."

He said though tradition had something to teach and offer, modern science treated it as irrelevant instead of essential.

Farmers, he stated must tapped indigenous technological knowledge to help improve food production, noting that in Japan, “farming systems are based on a collection of knowledge systems embracing the culture and traditions of people.”

“Farmers in Japan have adequate knowledge and information on farming - planting of seeds and crops and harvesting. Therefore, discourse among farmers on farming is very important. Sharing knowledge is critical to building a knowledge community for our farmers.”

“Our traditional farmers have a scientific approach to farming - they make inferences, they understand what works and what do not, know configuration of objects, and observe variations as traditional farmers,” Prof. Hagan, also a former Chairman of the National Commission on Culture said.

He said the author of the book had shown that progress can be made by starting from the known to the unknown. “Traditional farmers must be made partners in development planning.”

He said the book would help policy makers, academia, researchers, and agricultural scientists.

Launching the Book, Mr Abrahim Adam, Board Chairman of the Agricultural Development Bank described Prof. Benneh as a prophet of continuity because even in his present health condition in a wheel chair, he had come out with such a brilliant work.

He said ADB was proud to be a sponsor of the publication of the book and promised to sponsor also a roundtable to discuss the critical issues raised in his book.

Prof. Benneh had proposed a national forum roundtable of science and technology innovations to discuss the main issues he raised in his book. According to him, the challenge of how to incorporate tradition into the new technology could be addressed at such a roundtable.

“Africans have God giving gifts of innovations and inventions. Modern investors are taking Africa for a ride and before they realized, we will have a revolution,” he said.

Vice President John Dramani Mahama, in a brief speech read for him, commended Prof Benneh for his determination to compile the book despite his ill-health.

He said the book would be a useful guide to district assemblies and communities in the country for the management of agricultural lands and for small holder farmers.

George Benneh is Emeritus professor of Geography and Resource Development at the University of Ghana; a former Vice Chancellor of the University of Ghana; a fellow of the Ghana Academy of Arts and Sciences; external member of the European Academy; former President of the Association of Africa Universities; former distinguished Fulbright Hayes visiting professor in 1996 in USA.

Prof. Benneh served as a Minister of Lands, Natural Resources, Fuel and Power in SMCII, AFRC and the PNP governments where he finally became Finance Economic Planning Minister of Ghana.

He is a recipient of several honorary doctorate degrees from universities in Ghana and overseas.