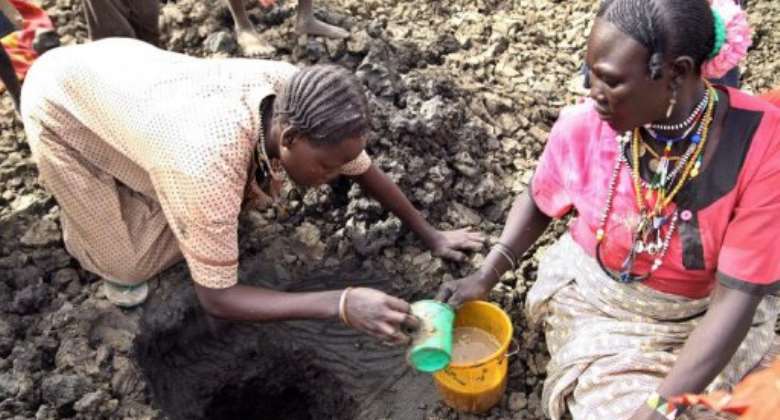 Fist fights have broken out among people queuing for water. By Hannah Mcneish (AFP)

JAMAM, South Sudan (AFP) - After fleeing civil strife in Sudan and risking their lives on the way, the thousands who made it across the border with South Sudan have found little respite in Jamam refugee camp.

With Sudanese jets bombing the nearby contested border area from the sky and water so scarce that ever-growing lines at the taps inevitably break into fist fights, Jamam is hardly a refuge at all.

And when the rain that could slake their thirst finally comes, it will slow food supplies down, flood the region and force them to relocate once again.

Huddled around a fire at dawn in the sprawling refugee camp, Hamid Yussuf Bashir said he was lucky to survive a 17-day trek with his five children out of Sudan's war-torn Blue Nile state.

"We were facing hunger on the way, and that's how other people starved to death," said Bashir, who fled to this camp across the border into South Sudan.

"With the rains, a lot of people lost their lives from pneumonia," he added, pulling his children closer.

The UN refugee agency this week warned that the lives of thousands of Sudanese refugees were at risk as Khartoum bombarded South Sudan's oil-rich border areas.

Khartoum has also blockaded aid from entering the war zones, where government soldiers have been battling rebel fighters once allied to what became South Sudan last July.

"There is not even a market or anywhere to go and buy things to eat," said Sheikh Osman Alamin, a farmer from the Soda region in Blue Nile, who fled three months ago to this impoverished and overstretched camp.

"You can only go and get sorghum (millet) inside the houses of people who left" from last year's harvest, he added.

Tensions are high between the former civil war foes turned separate nations, with airstrikes and clashes along their disputed frontier, as well as accusations each side arms proxy rebel forces against the other.

In this camp in Upper Nile state -- where over 37,000 people have sought shelter -- Bashir still fears for his children, as water and food are stretched to breaking point.

"The water here is not enough -- people end up fighting at the water point," said Bashir, as crowds of women at nearby taps line up jerry cans. Many go home empty handed at sunset.

In desperation, other women and children spend hours excavating a dried up watering hole, digging deep to scoop up cups of muddy water -- some painstakingly tipped into containers, others gulped down by children waiting in baking heat.

"We know that this water is not good," said Macda Doka Waka, 19, who digs and scoops for three hours just to fill one jerry can.

"We used to make lines and take water from the tap, but for two days we have not had water," adding that she preferred the tough and slow method of water collection than fighting at the crowded taps.

Aid agency Oxfam says it is struggling to meet the demand for water -- now being brought in by truck -- after 10 boreholes dug into the brittle earth collapsed.

Medical charity Medecins Sans Frontieres (Doctors Without Borders - MSF), says that around 35 percent of patients at its clinic have diarrhoea, while eye and skin infections linked to poor sanitation are on the rise.

Outside the clinic, Entisar Abas Elmak cradles 14-month-old Asabrin, who she says is weakened by vomiting and diarrhoea due to the lack of food, water and vitamins in the camp over the past two months.

"We are being given food, but it's not enough," said Elmak, explaining that food is not handed out until refugees have been in the camp more than a month.

Current food stocks will last three months, while drilling water wells will become even harder in the rains.

"We're very concerned about how bad it may get when the rains come in terms of people's access to water," said MSF doctor Kirrily de Polnay.

Hollywood movie star George Clooney recently highlighted the ongoing fighting after sneaking into war zone, and then getting arrested outside Khartoum's Washington embassy when he demanded an end to a Sudanese offensive.

But Oxfam official Andrew Omale says that this barely accessible barren expanse of cracked, black earth has been overlooked for months.

"It is a forgotten emergency which has not attracted the international community," said Omale. "These people here started coming here in November -- up to now we have not actually received enough support to help the refugees."

When the rains come, the majority of the camp will have to relocate off the flood plains, while aid agencies prepare for the camp to double to around 80,000, as hunger continues to push people across the border.

Sheikh El Rathi Rajab, a former Blue Nile State MP forced to flee in September, warns more people want to come south but are trapped by the fighting, and that while conditions in the camp are grim, the situation there is worse.

"The bombings are killing people... they are not getting medical treatment, they have no access to water, no education," Rajab said.

"Their basic needs aren't being met and if they decide to go to the north of Sudan, they'll be killed."