THE INDEPENDENCE OF GHAHA IS MEANINGLESS - KWAME NKRUMAH (Part 1) 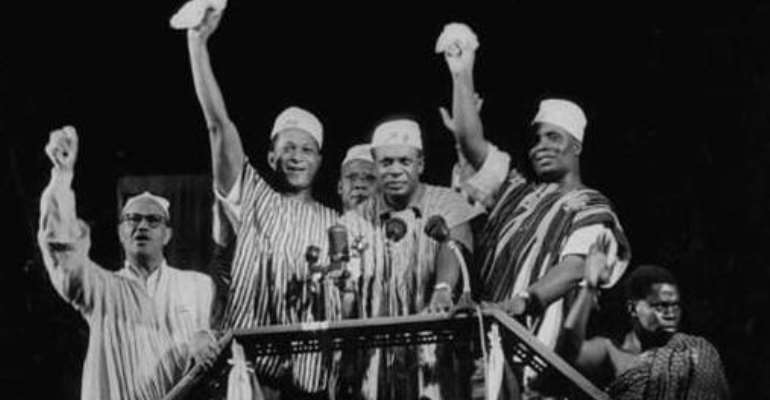 The foremost aim of writing this piece of article is to activate a certain level of consciousness in the misinformed average Africa Union citizen. This article seeks to expose the anomalies designed to dwarf the exemplary life, work and ambition of Kwame Nkrumah as a Ghanaian personality, than his real ambition of personifying the continental Union government. So rather than a man whose vision centred on the African continental Union government, his works were mostly misguided to orchestrate that of a man who lived for Ghana.

The African elite class have for a very long time been able to sustain a limited level of consciousness regarding the perception of the unconscious African masses on their continental role. These elites have intentionally taken advantage of the absence of the mass continental participation through the ballot box in the election of the AU president to mislead the ordinary man on the street and to sustain their misrepresentation of Nkrumah. Instead of once the Africa Union president by the will of the African masses, he remains the president of Ghana by the expressed will of the people of Ghana through the ballot box.

All these while, the elite colonial cum imperialists' foreign governments and their African elite indigenous collaborators have worked tirelessly at misleading the African masses to think of themselves as inhabitants of colonies mistaken for countries. Nkrumah's continental stance in the strengthening of the masses for a common continental leadership figure became difficult for the imperialists' to stomach as this threatens the core element that sustains non-African interest on the continent. So even long after his life, instead of painting Nkrumah as a common continental hero whose effort suffered due to lack of a practice involving the direct participation by every AU member state citizen to produce our common hero of the people as the “African personality”, the mysterious ones never relent in their effort of dwarfing the man to the level of a reformed colonial personality. In short, a modern version of the Governor General with a duty of supervising charted territories that earns his place by the impression made on the colonial master.

The 6th of March, fifty-five years ago, indeed was supposed to marked the beginning of an era in the life of a define people that today called themselves Ghanaians. This was said to be a transition from the reign of a few minority indigenous elite backed by the 'colonial elite gods of Europe' to that of an era when the majority of our people freely choose individuals like Osagyfor Dr. Kwame Nkrumah to self-determine their own destiny. In other words, out of the so many entities that the European powers arbitrarily carved out for themselves, occupied and subjected to life of slavery on the entire continent of Africa, Ghana begun the great continental journey of a people determined to stair their own affairs.

Nkrumah explained this great transition to the people of Ghana, as a work in progress and a means of actualizing a single African people continental government than just an end in itself. The continental government headed by the “African Personality of the Union”, Dr. Kwame Nkrumah explained will have to be stronger than any leader of the member states of the Union in order to be able to function effectively and efficiently for the benefit of all the Union's citizens. He warns the masses of the continent, represented at that time by the Ghanaian multitude, not to relent on the progress being made as, “The Independent of Ghana will be meaningless until it is link with the total liberation of the African continent”. He admonished the masses of their role as the sacred custodians of the African Union to be vigilant in their choice of who assume the leadership position of their Union. He depicted the Ghanaian mass action as a journey whose ultimate goal is the continental government of the people.

On that memorable day, amidst the tears of joy, our heroes felt a sense of relief of seeing that what their fore fathers thought could never be possible is unfolding itself before them. The event started the beginning of the end of a history of over two hundred years of our continental humiliation. On this day, Kwame Nkrumah did not mince words in reminding his fellow freedom fighters that the “days of our passive majority”, ruled by a minority's will, is over. Overwhelmed by an emotion humanly difficult to control and with the image of the whole continental Union government of the masses in mind, Nkrumah echoed “Ghana, your beloved nation, is free for ever”. This was said hoping that the unstoppable journey of the people, to the actualization of this continental government of the masses that will be guaranteeing the then attained independence of Ghana beyond any colonial or imperialists influence, is within our grasp.

In fact Nkrumah was very aware of being misunderstood by some people on his principle of mass participation in the governance of the people. In his emphasis on the significance of the role of the masses as the direct determinant of who control the continental government then named the Organization of the Africa Unity (OAU), he echoed “Today is the independent of Ghana but tomorrow, the United State of Africa”. He made it very clear that the only way the African continent and its resources shall be of any use to the masses on the continent is when the people directly participate in the Presidential election of the Union. The prize, he concluded, is the “Continental government of Africa” by the masses than just the few elite of the continent.

The truth about the independence of Ghana, unlike the elusion most people had, was that of a struggle between the interests of the minority elite class that is consistent with that of the colonial masters as against the interest of the majority masses that is in contrast with that of the colonizing forces. In short, what we mostly called the “colonial master's governance” is just the rule of the few elite of Europe in association with the elite of the colonies to sustain a common interest.

Prior to the era of attainment of our so called African states Independence, the occupying forces of the European elite have discovered that there exists a common interest shared by the elite classes everywhere. They were also aware that in employing locally trained loyal elites, the efficiency level is equally just as high as bringing in loyal elite labour from the home government. In fact the indigenous elites tend to be even much better as the means of exploiting their own people as the difference is not easily seen.

This phenomenon becomes the alternative to the waning direct unpopular colonial rule and turned out to be the best strategy behind the granting of independence to the African countries by the colonial departing powers. The approach served very well as a means of sustaining their economic and political interest on the continent. Great as this alternative approach is to the interest of the imperialists, it is susceptible to mass enfranchisement. Thus the colonial version of democracy to the African colonies were designed and aimed at disenfranchising the majority to the advantage of the minority as the elites are always the minority anywhere.

This version of indirect colonial rule assumed several forms across the continent from elite tribe, elite religion, elite race, to what have you. In short, the base line is to exclude the majority as much as practically possible employing any means necessary. Some very good glaring example of majority exclusion in the election of the head of state are the cases of South Africa and Zimbabwe where race was the key factor employed. In fact the democratic South Africa Apartheid government was a fresh case in mind. In some other cases now in vogue across the African continent, all the candidates representing the political parties come from the elite class bred across the tribal, locational and religious spectrum. The solemn creed of these people is to sustain the common elite interest.

It is important to notice the dynamics of “Class Struggle” in all the developments as such phenomenon unfolded itself all along in our history and our effort in the attainment of independence is not an exception. The struggle for the control of power on the African continent between the minority elite and the majority masses has always been on the contention of who governs?

It however equally important to be mindful of the fact that unlike the case with most African states falling into the then “global elite” trap, few individuals like Kwame Nkrumah were able to understand in advance the evil ploy of the colonial masters to mislead the masses by limited franchising and so evolved a counter effort to neutralize such moves. This was made possible by the masses in their ability not only in identifying genuine leadership characters from among themselves as such individual emerges but also how the masses comprehended the disseminated information from such leadership.

In short, unlike most of us today, the people identified and empowered for themselves a leadership personality to represent their vision and aspiration that become their voice to replace misrepresentations of the elite class. The voice of the people demanding for equal right and justice symbolized by their common leadership become the sledge hammer of creating the pressure in demanding for one-man one-vote regardless to creed, cast, social status, geographical location, tribal or religious affiliations, that only exist to sustain minority elites interest. All these were made even much easier when eventually the minority elite conceded to allow the rules of democratic universal adult suffrage to be the determinant of who decides the destiny of all.

We the masses of the Africa Union have trusted the AU elites for a while. It is time they return the favour. The question we all nurse to ask is shall they humbly do so without us putting up an active demand???? (To be continued in Part 2)