Are Motor Cycle Drivers Above The Law? 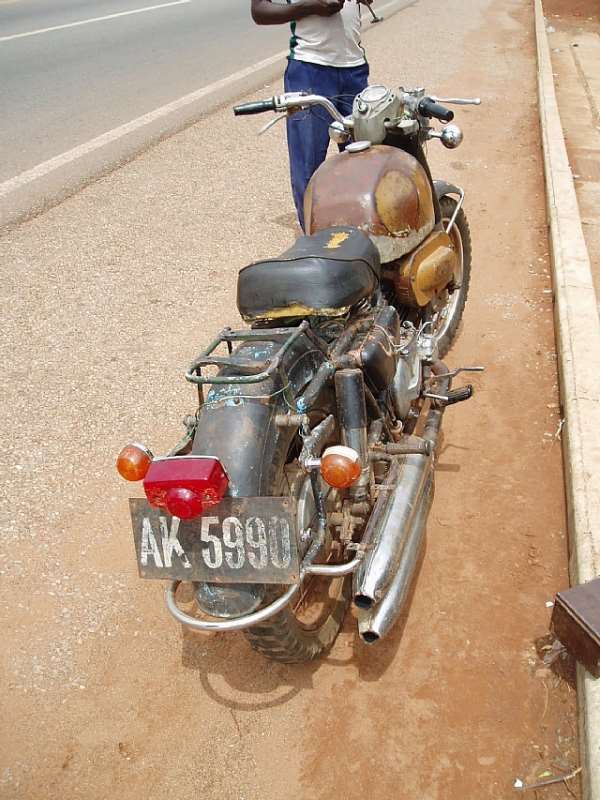 It is agonizing for me to admit that in Ghana it is painless for some people to break the law with impunity and get away with it. That is why when we see some people doing certain things which we consider as unlawful, we normally just look at them and move on quietly without questioning them or their motives in doing those things. These little things which we fail to question, over time, become overblown national crises.

There have been several instances when we come across some people breaking the law. Instead of someone just stopping to question the motive or alerting the responsible authority or the police we just look on and move on. Most of the time, people who come across these acts make conclusions that since they are not responsible it is better for them to mind their own business and move on.

Due to the inability of the Accra Metropolitan Authority (AMA) to do something with the initial dog chain seller who broke the law by selling on the street, today they have over 3000 people to contend with. Since these traders make a lot of money by selling on the streets to take care of their families and loved ones, moving them permanently from the roads have become a toxically political issue which no party would want to address.

We have been talking about Sodom & Gomorrah and the chaotic but explosive situation there. Authorities have expressed concerns about how that place could one day explode leading to untold misery of greater proportions. Yet, party by party seems to be turning a blind eye on the situation at Sodom & Gomorrah. It is not because nothing can be done to move the people in that area who are occupying the place illegally. Something can be done, but it is estimated that the population of people living in Sodom & Gomorrah has ballooned to over 45,000, which far exceeds the population of the Akosombo Township by more than 10,000.

As a result, moving the people in Sodom & Gomorrah would be the greatest headache and mistake of any government in power. That is why it has been all talk for the past 10 or more years but little action. You are talking about a big voting block and any party that dares to dismantle the area would pay dearly at the polls.

But the big question to ask is did Sodom & Gomorrah spring up overnight? No, it did not. It started when one or two people brazenly put up a ramshackle house and started to lodge there. Some people in authority may have seen them but said or did nothing. Others who are not in authority also may have seen them but turned a blind eye. But evil prevails when good men fail to act. That is why today we have over 45,000 illegal occupants at Sodom and Gomorrah to contend with.

Another chaotic and volatile situation seems to be brewing in Accra. I have seen it; many people have also seen it. And I bet you the authority responsible for averting the messy situation is very much aware about the problem. But nothing has so far been done. People are breaking the road traffic laws with impunity and brazenly whilst the police or the Motor Traffic and Transport Unit (MTTU) has no clue about what is going on.

The motor cycle drivers in the country especially those in Accra seem to have different traffic laws. To start with most of these motor cyclists drive without their helmets on. There is this motor cyclist who I see very often driving two kids to school daily. None of the kids have helmets but this man does not seem to care but drive the kids to and from school. I bet you a policeman may have seen him but nothing has been done so this motor cyclist thinks what he is doing is okay and cool. What happens if calamity struck one day when he is driving the kids to school? What do you think will happen to the kids if this cyclist is involved in an accident? You guess is as good as mine.

Motor cyclists in Accra drive anyhow. They do not observe any traffic regulations and jump red lights with impunity. In fact they wait for nobody. They just drive and you see police officers directing traffic just looking at them to do their own thing.

What angers me the most is that there have been multiple occasions that some of these motor cyclists in an attempt to avoid huge traffic jams drive in the opposite direction forcing on-coming vehicles to squeeze and create rooms for them in order to avoid hitting them. They simply have no respect for anybody on the road and the MTTU people are simply helpless.

I am disgusted that the MTTU boss, Mr. Awuni Angwubutoge, a trained journalist, who see these disgusting situations by the motor cyclists has done nothing to address it. My biggest question is what are we waiting for? Are we waiting for a big crash which would lead to deaths before we jump in to arrest these offending motorists?

Truly Ghana is turning out to be a country of many laws, but most of these laws are not being observed or enforced. As a result, many citizens have taken advantage of the do-nothing enforcing authorities to do their own thing. We wait until certain issues balloon to higher proportions before we jump in to act. But most of the time out marking time has affected us big time leading us to spend more money and time to clean up our act. But I must conclude by saying that time like tide, waits for no one.